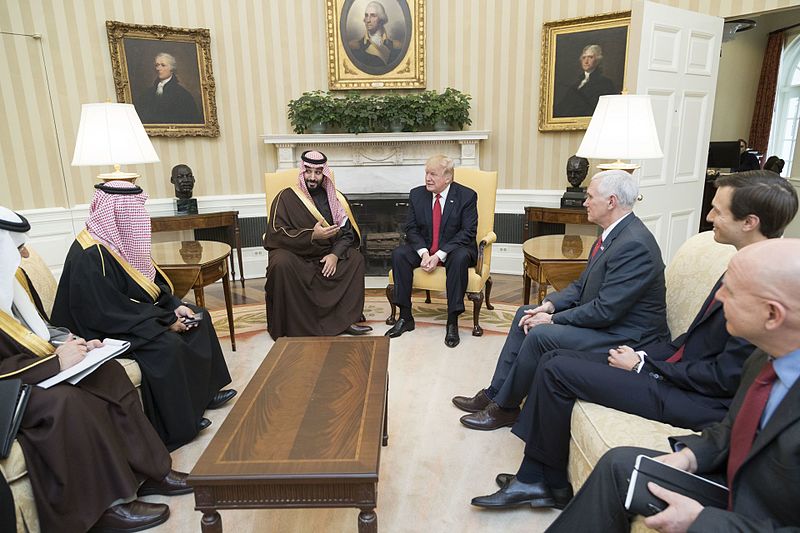 Saudi Crown Prince Mohammed bin Salman arrived in the United States Monday to much fanfare. One of the hot topics during the crown prince’s visit is the long-expected, much-anticipated privatization of Saudi Aramco. One major unanswered question surrounding the plan for privatization is where Saudi leadership wants to locate the initial public offering (IPO) for 5 percent of the company. Prevailing wisdom holds that shares will be floated in Riyadh on the Tadawul stock market, while a large portion will be floated either in New York, London, Shanghai, or Hong Kong. It is also possible that Chinese firms will buy a certain amount of the shares privately ahead of the IPO.

Another key question is what the final valuation of Aramco will be. The $2 trillion valuation mentioned by the crown prince in April 2016 has since been described as overly optimistic. Indeed, this could be the case if Saudi Aramco were just an average national oil company (NOC), interested only in cashing in on its crude production. However, in reality, Saudi Aramco is as sophisticated as any large international oil company (IOC) and appears to have a profit maximization strategy well in place.

Currently, Saudi Aramco’s most important and relevant policy is its focus on downstream, namely the refining sector and further down the production line in basic and advanced chemicals. During a trip made by the author in January 2018, the company’s officers mentioned that the company will refine over 10 million barrels per day (b/d) within a few years, a substantial increase over the company’s current refining output of 5.4 million b/d. A March 10, 2017 edition of the Middle East Economic Survey indicated that in order to increase its refining volume, Aramco is expected to invest in large new refineries in India, Indonesia, and Malaysia, as well as increase capacity in its plants in China.

Moreover, this capacity is not merely for producing gasoline, diesel, and kerosene, as any refinery does. In addition to increasing capacity, Aramco is also increasing capability. These refineries are being upgraded—at great expense—to maximize higher value gasoline from low value bottom of the barrel products. Saudi Aramco also uses natural gas liquids and naphtha from the refineries to integrate full production of a variety of chemicals, including very advanced ones. While the crude oil used in these downstream ventures gives Saudi Arabia a base load for its crude production, these refining ventures predominantly allow Aramco to increase the value of their barrels of crude by up to three to ten times, according to estimates by the author.

However, adding such value to crude requires very large capital investments. Saudi Aramco has already announced $414 billion worth of new plants and refining capacity over the next ten years and is positioning itself to become a fully integrated company. Aramco has started advanced chemical productions in the $20 billion Sadara joint venture with Dow Chemicals. It is also working with many companies to promote downstream production in a newly established 12 km2 industrial zone next to the Sadara complex. Thus, the whole Sadara venture allows full on-line production from naptha and natural gas liquids starting from the Saudi Aramco Total Refining and Petrochemical Company (SATORP) refinery, next door to Sadara, down to advanced specialty chemicals.

This new focus on downstream policy is intended to make Saudi Aramco a major energy-based company, not merely a producer of crude oil, making Saudi Aramco a company more akin to ExxonMobil or Chevron than to a normal NOC. In other words, Saudi Aramco’s valuation can now be based on the multiple of earnings presently used by large IOCs.

According to calculations by the author, a statistical mean of the earnings multiple of the seven largest oil companies in the world for the past five years comes to 24.5 times earnings. Should this multiple be applied to estimates of Saudi Aramco profits after royalties and taxes, the valuation should indeed be close to $2 trillion, making it relatively easy for the IPO to achieve its target.

Jean-Francois Seznec is a senior fellow with the Atlantic Council Global Energy Center.