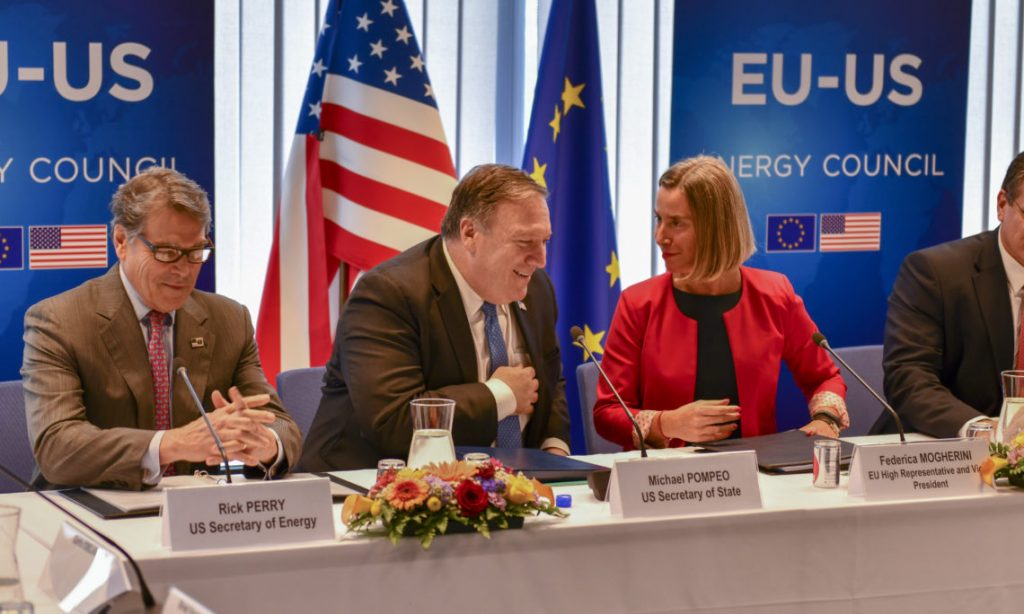 US Secretary of State Michael R. Pompeo chats with US Secretary of Energy Rick Perry and US Representative to the European Union Federica Mogherini at the United States EU Energy Council meeting in Brussels, Belgium on July 12, 2018 (photo by: US State Department).

While serving as Franklin D. Roosevelt’s director of the US Office of Scientific Research and Development in 1944, Vannevar Bush wrote: “Basic research is the pacemaker for technological progress.” He championed the idea of a sequential relationship between government-funded research and development (R&D) and innovation. In his view, the government provides funding for basic research, and innovation and technological progress follow naturally.

While Bush penned his advice seventy-five years ago, current climate policy debates seem to stick to the same paradigm, even assuming that innovation will deliver emissions reductions on its own. However, additional government policies and material investment are needed to move from R&D to successful innovation—and policymakers should look to comprehensive climate policy to constitute this link.

Innovation has become the term of the hour. Trendy yet elusive, it seems to fit many agendas: scoring political wins, reviving the manufacturing sector, ameliorating global warming, and delivering energy security. Innovation is about bringing technologies to market and reaping the benefits of learning-by-doing, reducing cost with increasing deployment. Though sometimes used interchangeably with R&D—which is equally important—these two terms do not have the same meaning.

To tackle climate change, innovation is more important than ever. The Intergovernmental Panel on Climate Change’s “Global Warming of 1.5 Degree Celsius” report highlights the necessity of using all options for reducing emissions, including those that are not widely deployed but ready for commercialization, such as carbon capture, advanced nuclear energy, and hydrogen.

As policymakers are looking to innovation to solve the climate puzzle, Germany’s Energiewende provides insightful lessons: government policies and subsidies drive improvements and reduce cost throughout the innovation and commercialization process, not just early stage R&D. Yet, innovation does not ensure emissions reductions. Rather, climate policy that reflects the externalities of pollution, coupled with further investment, is the best opportunity to deliver on innovation ambition.

A pioneer in clean energy technologies, Germany began subsidizing renewables in the 1990s, with its current policy passed in 2000. Only a few years after this policy came into effect, its domestic solar industry blossomed and in 2005, Germany was deploying almost 70 percent of global solar additions. China, seeking to boost employment and economic growth, saw an opportunity in the German government’s willingness to subsidize solar technologies. By 2013, China had catapulted itself to the top of the world’s solar production, sending most German solar companies into bankruptcy while boosting panel deployment to unprecedented highs. Germany, in pursuit of ambitious clean energy goals and technology cost reductions, had abandoned the protection of its industry.

With consumers paying a cumulative minimum of $200 billion in subsidies since 2000, Germany’s clean energy innovation venture was not necessarily cheap. Yet, its policies and willingness to let its own industry fail helped slash the price of solar and spun one of the most successful clean energy innovation stories to date. Researchers at MIT analyzed solar cost declines from 1980 to 2012, and, according to them, 90 percent of cost declines can be attributed to government support: 60 percent are a result of deployment policies such as feed-in-tariffs and renewable portfolio standards and 30 percent can be tracked back to early R&D. The bottom line is that R&D is important in early stages, but policy-backed innovation and deployment delivers both cost reductions and opportunities to learn by doing on the road to commercialization.

Germany’s rapid deployment of renewable energy, while positively transforming its energy system, did not result in immediate steep emissions reductions because it was also a policy to pivot away from nuclear, rather than one driven purely by climate ambition. Nonetheless, researchers concluded that a “virtuous cycle” between emissions reductions policies and innovation can be created. First, climate policy mechanisms to reduce emissions drives emissions reductions technology markets. Second, with deployment, the marginal cost of reducing emissions with new technologies falls as economies of scale increase.

Experts also suggest that successful innovation depends on an enabling environment. This includes companies being able to access institutions that convene and coordinate among innovators, as well as help reduce and pool risk. German companies, particularly clean energy firms, are able to build on a diverse network of research and testing facilities, while many US companies are reliant on their in-house resources alone—a fact that Bush pointed out almost seventy-five years ago. Government can help improve access to such institutions, provide resources and policies, and create synergies that clean energy innovators can tap into.

The European Union (EU)’s Innovation Fund, while nascent and yet to deliver results, incorporates most of these lessons into its work: policymakers are looking to climate policy—the Emissions Trading System (ETS)—as a financing mechanism and driver for government-backed innovation for a variety of clean energy technologies, aiming to equip EU companies with a first-mover advantage.

Taking the example of carbon capture and storage, the United States, home to most global large-scale facilities, cutting-edge test centers, and the 45Q tax credit—the most progressive carbon capture specific incentive policy, and arguably a price on carbon—is well-placed for commercialization.

For this kind of innovation to succeed, government has a continuous role to play beyond supporting R&D, by funding enabling institutions, providing catalyzing resources, and deployment incentives such as grants and de-risking mechanisms to enable capital flows, which will help the private sector deploy new technologies.

Assuming that there is a linear relationship between R&D and innovation, and that these mechanisms alone will reduce emissions to zero by mid-century, is a stretch. Instead, policymakers should look to the energy transition as an unprecedented investment opportunity to propel the US into the low-carbon economy of the future and deliver on innovation ambition.

Lee Beck is a Women Leaders in Energy fellow at the Atlantic Council’s Global Energy Center and is the senior advisor for advocacy and communications at the Global CCS Institute. You can follow her on Twitter @_Leebe