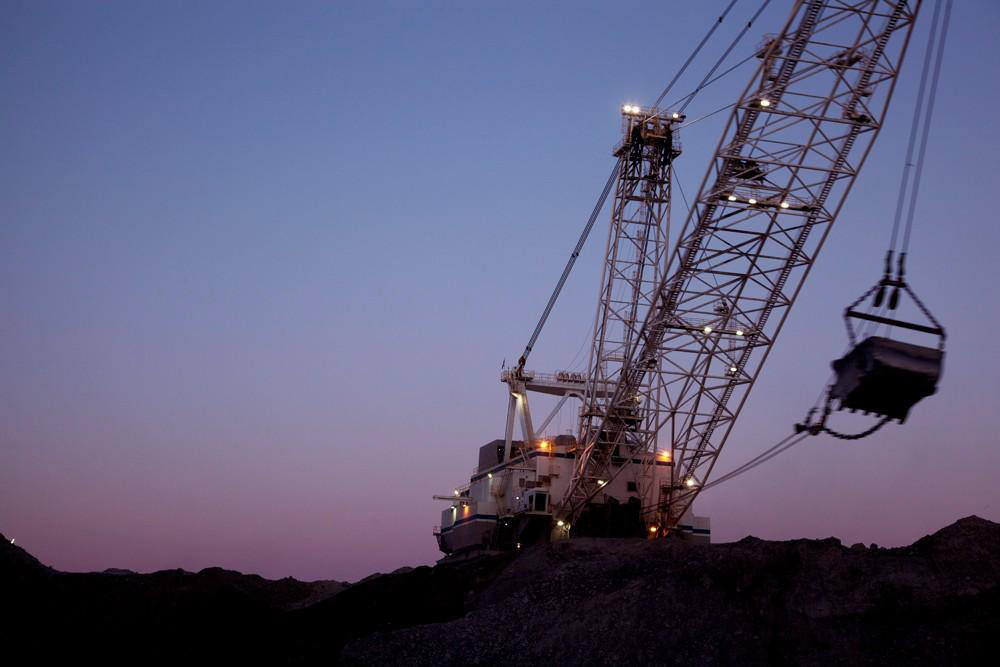 The BLM administers coal leasing on approximately 570 million acres of federal mineral estate. Coal continues to be a large source of energy in the United States, but the continuing low cost of natural gas has spurred a shift away from coal for retail energy production (photo by: BLM Wyoming).

This blog is the fourth piece in a series examining the global energy transition through the lens of communities with a significant stake in the traditional energy economy. In examining the social, political, and economic dynamics, policy choices that are made or missed, and the approaches that seem most promising and scalable, there is the possibility of strengthening social cohesion and equitable outcomes amid the global energy transition. You can find the previous post here.

For nearly 40 years, Wyoming has been the largest coal producer in the United States. Its communities and their identities have been inextricably tied to the resource, an identity that many people are now grappling with as coal continues to lose its footing in the energy market.

In 2017, Wyoming produced 80,374 thousand short tons of coal, a sharp decline from the 387,924 thousand short tons it produced in 2013. A massive increase in instances of job loss and company shutdowns followed the decline in production. According to a Wyoming Research and Planning report, between 2014 and 2016, approximately 25,000 people were laid off because of the state’s economic downturn (Tribune).

To understand the impact of shifting energy markets, one does not have to look further than the town of Gillette, Wyoming in the Powder River Basin region. The Powder River Basin stretches from Wyoming into Montana and is at the heart of Wyoming’s coal production, as it is responsible for more than 40 percent of the mined coal produced in the United States. In March 2016, this mining region let go of 500 miners in one day, and in 2017 companies “withdrew applications for 901 million tons of coal in the Powder River Basin. Shortly thereafter, three coal companies—Arch, Peabody, and Alpha—went bankrupt, resulting in almost 2,500 job losses in Gillette. For the small 32,000 person town of Gillette, these shutdowns were significant, putting nearly 7.8 percent of its population out of work.

In addition to job loss, many companies are struggling to pay back loans and fees from cancelled contracts. For instance, Cloud Peak Energy, a major coal producer in the Powder River Basin, was forced to pay hundreds of thousands of dollars in penalties to transportation companies because of its cancelled export contracts.

What are the driving forces?

Many of the coal workers who lost their jobs blame the Obama Administration’s imposition of new federal regulations, most notably the Clean Power Plan (CPP), which some argued constituted a “war on coal.” The sentiment of coal workers was echoed by Wyoming Governor Matt Mead when he said the “Clean Power Plan was flawed […] and overly burdensome for industry.” However, while the CPP increased regulatory oversight, the reality is that many other factors were already contributing to the decline of Wyoming’s coal industry.

I. Asian market. Much of Wyoming’s coal woes can be attributed to unforeseen changes in Asian markets. Wyoming coal producers believed China’s coal consumption would continue to increase at the same pace of growth in the mid 2000’s to 2013, an annual growth rate of 12 percent. Since 2000, China has been responsible for approximately 80 percent of global growth in coal consumption. In 2013, consumption peaked, and then declined 3-4 percent for the next several years at a rate of roughly 300 million tons per year, equivalent to roughly one-third of total coal output in the US. Consequently, many companies in Wyoming took out large loans and over-produced based on inaccurate growth predictions. For example, Arch Coal, one of the United States’ largest coal producers in the Powder River Basin, took out large loans during a peak in global coal markets a few years ago, but ended up almost $4.5 billion in debt.

As Chinese demand slowed and global coal prices fell, US coal companies were unable to make good on both their loans and incurred costs for cancelled contracts, and fell further into debt. At the same time, the decline in China’s coal consumption correlates with an increase in competing energy sources. Natural gas and renewables rose to 20.8 percent of China’s energy consumption in 2016.

III. Coal-methane bust. Before its current coal struggles, the Powder River Basin dealt with a similar crisis with coal-bed methane, which resulted in massive job losses and emigration from the area. In the early 2000s, coal-bed methane appeared to be a lucrative venture and jobs and income poured in from cyclical oil pays for years. People rushed to the Powder River Basin to drill thousands of wells that they could extract natural gas from, at a rate of 3,000 new wells per year.

During the height of the boom, from 1998 through 2008, natural gas prices averaged $6 per thousand cubic feet (mcf), with a peak near $15 per mcf. But, as new hydraulic fracturing technologies were developed, companies moved their production to previously untapped gas reserves in the southern and eastern United States. Consequently, natural gas became easily extractable and its prices fell, reaching approximately $4 per mcf after 2008.  While some large energy companies previously drilling for coal-bed methane were able to keep pace with the expansion of natural gas production in other areas of the country, other operators either bought wells in Wyoming, in hopes that the coal-bed methane industry would recover, or began severely cutting back on their production. But prices never rose again, and companies were unable to pay fees, taxes, and royalties, leading to thousands of wells being abandoned and, eventually, many companies filing for bankruptcy. The bust caused a loss of almost 30,000 workers between 2008 and 2010.

It seems that many people in Wyoming are on the path to make the same mistakes with the decline of coal as they did with the coal-bed methane bust. Wyoming companies must realize that the inevitable booms and busts that come with fuel extraction are unsustainable. Given the lessons learned in the recent bust, even if Wyoming coal production does rise in the next few years, the potential uptick may not translate to significant job growth.

Despite the Trump administration’s push to roll back environmental regulations, the future of Wyoming’s coal industry remains bleak. Firstly, even after easing environmental regulations, Wyoming has only added back five coal mining jobs in 2017, and the EIA’s forecast for coal production estimates a decline of approximately 5 percent in 2018. Secondly, the price of developing wind and solar continues to become cheaper. Finally, many coal export terminals on the West coast—the main path for Powder River Basin companies to export coal to Asia—are shutting down. Proposals for coal export terminals are being challenged by states such as Oregon and Washington, which would stymie future growth.

As the prospects of a long-term coal future decline, Wyoming has an opportunity to harness the power of its most abundant resource—wind. In addition to being the highest coal producing state in the US, it is also leading the country in renewable energy capacity. A report published by the Union of Concerned Scientists (UCS) found that renewable energy sources account for all of the new energy capacity added to Wyoming between 2016 and 2019, and that Wyoming leads the US in renewable energy development per capita.

A priority for Wyoming is to find employment for those that have, or will, lose their jobs as coal is phased out. Renewable energy could be the solution. According to a Labor Network for Sustainability study, the switch to renewable energy has the potential to create hundreds of thousands of jobs nationwide in manufacturing and construction. A “just transition” could fill many of these positions with laid-off Wyoming miners, especially because many of the skills from the coal industry are transferable to the advanced energy sector. While wind energy jobs might not be a perfect substitute for those who previously worked in the coal industry, some wind companies are attempting to make the transition as smooth as possible by offering free training to those interested in working on wind farms. Some already have plans to capitalize on the emerging renewable energy market in the state. Billionaire Philip Anschutz is spending five billion dollars in Carbon County, Wyoming —a place named for its abundant coal economy—to build the country’s largest wind farm, Chokecherry and Sierra Madre (CCSM Project), and a 700 mile transmission line. Similarly, Rocky Mountain Power is planning a $3.5 billion investment in wind turbines and transmission lines in the next three years, expected to bring up to 1,400 jobs and $80 million in tax revenue to the state.

In a state whose history is rooted in coal, getting citizens to embrace renewable energy, something the heavily Republican state blames for job loss, is proving to be difficult and politically fraught. For instance, in 2017, legislators attempted to pass a bill that would effectively penalize any utilities that produced solar or wind energy. While the bill did not pass, it points to an undercurrent of hostility toward wind. Moreover, Wyoming is the only state that taxes wind production, at a rate of $1 per megawatt-hour, and some lawmakers are still considering proposals to increase the production tax to offset declining fossil fuel revenues.

Wind energy also promises to bring in additional revenue to Wyoming via property payments and Payments in Lieu of Taxes (PILOTs). Wind royalty and property payments to landowners help generate buy-in from a broader range of stakeholders. In Ohio, the Blue Creek Wind Farm generates $2 million annually in lease payments to landowners. Wind Farms also make PILOTs that go toward school districts and local government bodies. For example, in one year, the Blue Creek Wind Farm alone contributed $850,000 to one school district and $300,000 to the Van Wert County government.

Some entrepreneurs are not ready to give up on coal just yet, though, and are looking for methods to modernize the use of coal. For example, when Ramaco Carbon opens, it will be Wyoming’s first coal mine that seeks to refine coal to make high-tech products such as carbon fibers and 3D printing and building materials. Research estimates show that a high-tech carbon industry in Wyoming could “support an average of 2,600 jobs annually through 2035.” That represents nearly a quarter of the state’s current manufacturing workforce. While these jobs would not completely replace job losses from the decline in traditional coal mining, it represents another opportunity for Wyoming workers to smoothly transition into new jobs. Furthermore, mining for the purpose of creating high-tech carbon products requires much less coal to be mined, as compared to mining for the purpose of energy production, meaning it has less of an environmental impact than traditional coal use. Similarly, the production of high tech carbon products does not result in significant emission emittance like the burning of coal for energy use.

Whether or not coal producers decide to recognize it, the coal industry’s continued challenges paint a dire picture of the industry’s future. Cheap natural gas will continue to be competitive and crowd out coal in the energy market. Modernization is the best way forward for Wyoming, whether that is the renewable energy sector or advanced applications of carbon. For the transition to be successful, it is imperative that Wyoming’s government officials begin capitalizing on the economic revenue that alternatives to coal could provide the Powder River Basin region.

Srividya Dasaraju is an intern at the Atlantic Council Global Energy Center. You can follow her on Twitter @Srividya_D