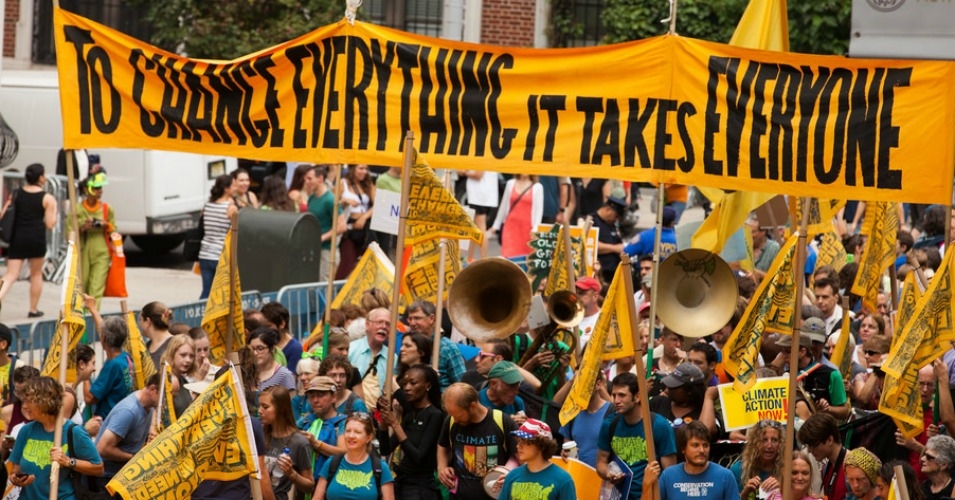 A photo from the People's Climate March in 2014, which brought together hundreds of thousands of people to demonstrate in favor of strong action on climate change. (By South Bend Voice)

Climate change is increasingly on the agenda for millennial conservatives.

In late February, a bipartisan coalition of thirty-four student groups from around the country—twenty-three of which are College Republican chapters—launched Students for Carbon Dividends (S4CD). S4CD advocates for the Baker-Shultz carbon dividend, a policy proposal that would impose a carbon tax of $40 per ton, return those tax proceeds to Americans taxpayers, create border carbon adjustments for exports and imports, and circumscribe the Environmental Protection Agency (EPA)’s regulatory authority, including the repeal of the Clean Power Plan. The plan gets its name from its leading proponents, James Baker and George Schultz, who collectively held key posts across four Republican administrations, including White House Chief of Staff, Secretary of State, and Secretary of the Treasury.

This marks one of the first instances in which College Republican groups have publicly, and in such a coordinated fashion, supported carbon pricing.

Millennial concern for climate change is indicative of a larger conservative trend. As of September 2017, 57 percent of GOP registered voters said they were concerned about climate change and its impact on the environment. This was 7 percentage points higher than polls from April, most likely due to Hurricane Irma sweeping through Florida and the Caribbean. According to Pew in March 2018, 57 percent of millennial Republicans see “solid evidence of warming” compared to 45 percent of boomer and silent generation Republicans.

If the conversation in Washington is to evolve from the existence of climate change to constructing climate solutions, increasing attention should be paid to the concerns of groups in the center. Although Republicans are increasingly concerned about climate change, that does not mean that the policies they might support to combat the problem will be any different from traditional Republican positions. For instance, policies that could potentially garner significant conservative support are unlikely to expand the size of government. The Baker-Shultz plan attempts to thread this needle by implementing an economy-wide carbon price while minimizing “command-and-control” environmental regulations.

Across Capitol Hill, the Climate Solutions Caucus (CSC), founded in February 2016, seeks to explore “economically-viable options to reduce climate risk.” CSC is currently comprised of thirty-six House Republicans and thirty-six House Democrats. No new member may join without bringing along a partner from across the aisle. In November, Rep. Carlos Curbelo (R-FL), a founding co-chair of the CSC, identified three phases of its evolution. Phase one involved initiating bipartisan discussion. Phase two involved blocking bad climate legislation. CSC currently is on phase three, which centers on identifying bipartisan climate legislation that all caucus members can support.

While the political avenue to carbon pricing, such as the Baker-Schultz proposal, may still be years away, there are two key avenues that are likely to be central in constructing bipartisan climate solutions today: national security and clean energy.

A similar trend can be seen with the US National Security Strategy (NSS). After climate was omitted from the NSS in January, over one hundred bipartisan representatives signed a letter urging Trump “to recognize climate change as a threat to the United States” due to its risks toward “military installations and our communities.” According to a 2017 Department of Defense report, 800 military sites have already been affected by droughts, 350 by extreme temperatures, 225 by flooding, and 200 by wildfires.

The relevance of climate change to military operations motivate both parties to act. While 72 percent of Americans report little or no confidence in elected officials to act in public interest, 79 percent of Americans “express a great deal (33 percent) or a fair amount (46 percent) of confidence in the military to act in the best interests of the public.” Framing climate change action as a military imperative makes the cause easier for American voters to support. Many legislators recognize both this framing issue and the degree to which climate change is a priority for the military, with Rep. Curbelo emphasizing that Congress needs “to ensure our military installations around the world are adapting and mitigating when it comes to climate change.”

In addition to military preparedness, clean energy opportunities also garner bipartisan support. Conservatives increasingly recognize that advanced energy can drive US competitiveness. On February 9, Congress passed the “FUTURE Act,” which encourages innovation in carbon capture utilization and storage while reducing carbon emissions. It provides a tax credit to entities that can capture or reuse their carbon emissions. On March 7, the Senate passed the Nuclear Energy Innovation Capabilities Act, which allows private companies and national laboratories to collaborate on reactor designs. This act is likely to move forward, as a similar version of the bill passed the House.

Despite the rhetoric on climate coming from the White House, there is a quiet but meaningful shift towards climate solutions from the military, states and cities, and even Congress. This progress is worth paying attention to and it’s a development that could help bring home both the risks of inaction in the face of climate change and the opportunities presented by climate solutions.

Kayla Soren is an intern at the Atlantic Council Global Energy Center.