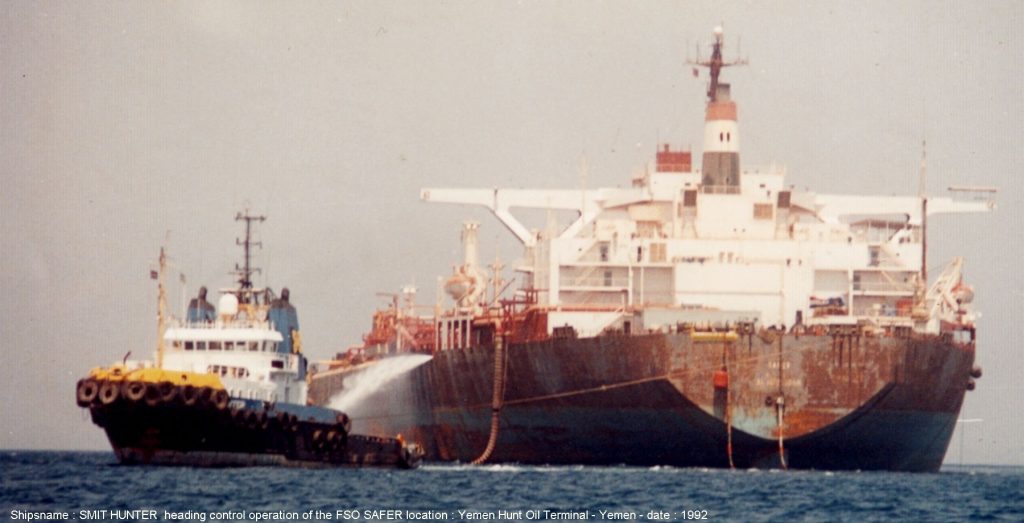 A floating storage and offloading (FSO) terminal less than five miles off the coast of Yemen has turned into a massive bomb—capable of explosion due to its contents and lack of maintenance. The risk of explosion increases by the day, and if that were to happen, not only would it damage or sink any ships in the vicinity, but it would create an environmental crisis roughly four and a half times the size of the Exxon Valdez oil spill.

The consequences of that explosion and corresponding environmental devastation would likely be 1) to rupture the fragile aid-focused ceasefire in Hodeidah established under the December 2018 Stockholm Agreement; and 2) to accelerate the already dire humanitarian crisis in Yemen where roughly fourteen million people are on the brink of famine, surviving at the moment on international aid. There is nothing benign about this situation—even in a region with countless immediate needs, this matter is of the utmost urgency.

Though a photograph reveals only a ship, known as the SAFER, its explosive potential renders it a floating bomb, permanently moored in the Red Sea off Ras Isa. The now-ironic name derives from the SAFER Exploration and Offshore Production Company, which had previously been the top oil company in Yemen. Built as a Japanese single hulled oil tanker in 1976, the SAFER has been situated off Ras Isa since 1988, connected to the Marib-Ras Isa pipeline and serving as both a storage facility and an export terminal. While the full capacity of the facility is roughly three million barrels, it is believed to still contain 1.14 million barrels among the thirty-four storage compartments onboard. A remarkable exposé by the Conflict and Environmental Observatory in May 2018 provided extensive details about the SAFER and its ongoing deterioration, and highlighted the environmental concerns of leaking from the FSO. The terminal has been closed since the start of Yemen’s civil war in March 2015, and it has gone without proper maintenance since. While the environmental impact of spillage caused by degradation of the SAFER’s tanks and hull would be devastating, there is a more catastrophic and increasingly likely possibility: it could explode.

Crude oil is inert and, when tended properly, a storage facility holding crude oil poses no inherent risk of fire or explosion. The concern, however, is the air space in a storage tank. If crude oil sits, even in floating facilities where the water helps regulate the temperature, the surface of the oil exposed to the air oxidizes over time—a process in which molecules from the oil break down and recombine with molecules in the air. The result is both heat and a flammable compound, the sort that makes oil-soaked rags spontaneously combust in a place with poor ventilation. To neutralize the danger of this chemical reaction when storing crude oil, a tank must be tended regularly to keep the oxygen level below 11 percent. Inert gases must be injected into the air space to ensure that the oxygen does not exceed that level of concentration. Above that threshold, the tank becomes flammable, and it can effectively become a giant bomb. After more than four years without maintenance, SAFER is no longer safe; it is a massive incendiary floating in one of the key access points for aid to Yemen.

A spark, an errant bullet, or an allision with another vessel could catalyze a devastating explosion that would destroy the facility and the pipeline, wreak havoc on the marine environment, and, in addition to the likely immediate human casualties, would almost certainly contribute to the humanitarian crisis by disrupting both the peace in Hodeidah under the Stockholm Agreement and the physical channel for delivering vital aid.

Yemeni authorities have requested United Nations (UN) assistance to abate this offshore threat on several occasions, but the bomb remains afloat, untended and under the control of the Houthis. Given that the Houthis have already attempted to blow up several oil tankers in transit through the Bab al-Mandeb and Red Sea, it may well be the case that they view this precarious situation as a tactical and strategic advantage worth maintaining. While Ras Isa is addressed under the Stockholm Agreement, the ceasefire remains exceedingly fragile and all parties are likely hedging their bets that fighting will resume.

For the Yemen Coast Guard to be able to fulfil its role under the Stockholm Agreement, and effectively “disarm” the SAFER with an inert gas operation as well as secure the condition of the facility against leaks, it will need express and visible UN backing. Since this facility is in Yemen’s territorial sea, international actors cannot just do what is necessary on their own; they must work with the Yemeni authorities. This matter cannot wait, so decisive international action in collaboration with the Coast Guard is therefore urgently necessary to ensure that this situation can be defused.

If immediate action is not taken to neutralize this bomb, the global economy may see a significant disruption to the flow of maritime commerce, the people of Yemen may experience the worst famine in over a century, and the world may, among other consequences, lose both a key area of marine biodiversity and the chance to study a rare coral system that has proved impervious to the rise in sea temperature. In other words, this is not a local matter, but one of truly global concern.

Image: The SMIT Hunter and FSO SAFER offshore in Yemen, 1992 (photo by Maasmondmaritime/Flickr).