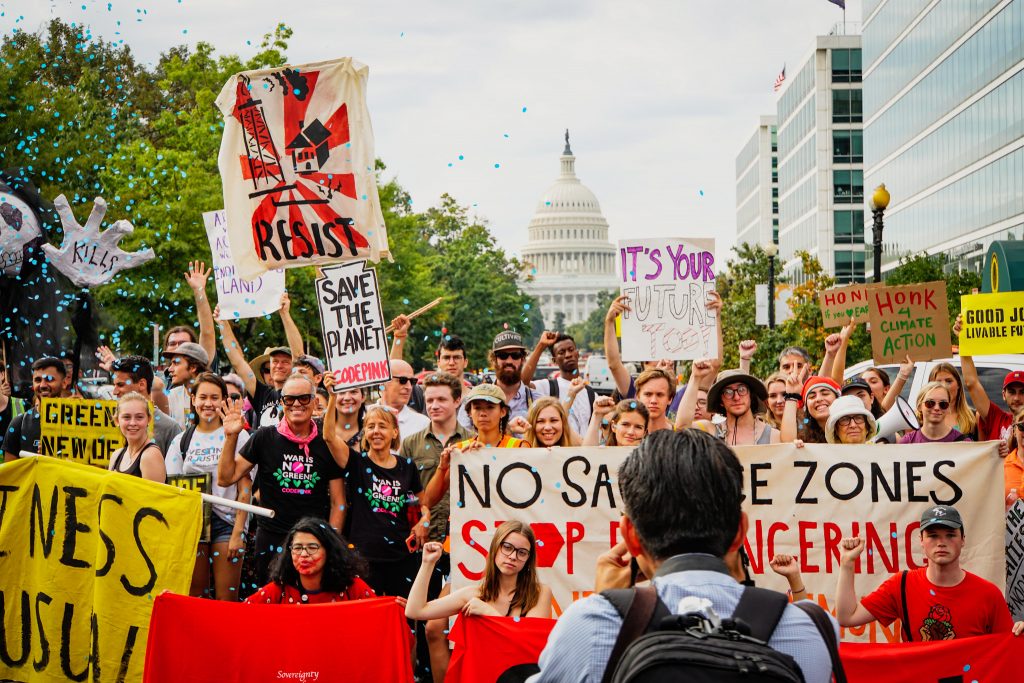 Millions of young people around the world took to the streets for the Global Climate Strike on Friday, September 20 to demand that governments take bolder action to address the climate crisis. Thousands of students took time off from class to protest again last Friday, and organizers say they plan to continue striking in the weeks to come.

But youth activists are not just skipping school to protest, they are also taking concrete steps to influence the policymaking process.

Meanwhile, plaintiffs in the Juliana v. United States climate case are hopeful that the recent strikes will intensify pressure on politicians and help move their legal case forward. The constitutional case is currently stalled, waiting on a trial date.

“This is exactly the type of energy we need to change the political reality we’re in,” said Vic Barrett, one of the twenty-one young people suing the US government over their right to a livable future, in an interview with me on the sidelines of the September 20 strike in New York City. “With the 2020 elections coming up it’s so exciting to see how many young people are engaged because we’re such a huge amount of the voting bloc.”

“Who’s in office determines the judges, and if we do get our case going, who is going to be there throughout the process,” he added. “This makes me really excited about 2020.”

Youth strikers below voting age are also getting actively involved in the US policymaking process, specifically when it comes to improving climate education in schools.

Last month, activists stood next to Congresswoman Barbara Lee (D-CA 13) as she announced a new resolution to support teaching climate change in schools. Proponents of the resolution have argued that it is significant because it shows that young people can have political influence even if they aren’t of voting age.

The resolution was authored by high school, middle school, and elementary school students involved with Schools for Climate Action, the environmental initiative associated with the National Children’s Campaign, an organization working to amplify the voices of America’s 74 million children and youth. Lee’s office said the resolution would be formally introduced in the coming days,

“We’re super excited to show that so many young people around the country that youth can really make a huge difference in our electoral process, and we’ve proved that by actually writing something that will be introduced and passed by the House of Representatives,” said Jonah Gottlieb, in an interview I conducted for the Political Climate podcast.

Gottlieb is seventeen years old and co-founder of the National Children’s Campaign. He was an organizer of the Washington, DC climate strike on September 20 and among the youth leaders to meet with lawmakers last month.

Listen to the full interview with Jonah Gottlieb—along with Jamie Margolin of Zero Hour, and Kelsey Juliana and Vic Barrett, plaintiffs in the of Youth v. United States lawsuit—in this episode of the Political Climate podcast, presented by the USC Schwarzenegger Institute.

While there is no guarantee the resolution will advance, it stands a reasonable chance of making it through the Democrat-controlled House. Rep. Lee called on her colleagues to support her resolution in a recent floor speech.

“It is a fact American students do not learn enough about climate change,” Lee said. “We need to teach every young person the human impacts of climate change and how to address our warming planet before it is too late.”

In addition to supporting teaching climate change in schools, Rep. Lee’s House Resolution declares climate change a social justice, racial justice, and human rights issue that disproportionately affects students of color and students in poverty. It also acknowledges research by the California Association of School Psychologists that found climate change is a potential threat to children’s psychological and social development.

Despite the large showing across America for last week’s Global Climate Strike, consistent access to climate change education remains an issue in the United States.

For instance, while many of today’s most outspoken youth climate activists belong to Generation Z, the demographic cohort born between the mid-1990s and early 2000s, understanding of the issue appears to vary across the group as a whole. A 2018 poll from the Pew Research Center found that the percentage of Generation Z respondents who believe climate change is connected to human activities is slightly less than that of Millennials, the demographic cohort preceding them.

As Eve Andrews recently wrote for Grist’s Ask Umbra column: “just because certain members of Generation Z … are super motivated to take action on global warming doesn’t mean many of them don’t need a little more schooling on the subject.”

While some school districts have pushed back on teaching climate science, there is widespread support for climate education across the US. According to an NPR/Ipsos poll, nearly 80 percent of parents support the teaching of climate change in schools.

“If anyone is going to make a difference in climate it’s going to be schools, because the people who are most likely to become activists are the ones around you today,” said Jennifer Jones, founder of Green Ivy Schools, in an interview at the NYC Climate Strike. “The youth are not afraid … I think that spirit is that you have to tap into. It’s like the world’s most renewable energy.”

If adopted, Rep. Lee’s resolution could help engage even more young people in addressing the climate crisis. Varshini Prakash, leader of the Sunrise Movement, noted in a speech at the NYC Climate Strike that mobilizing more than 4 million protesters around the world is a major achievement for the climate movement, but that turnout numbers are still well below the 20 million people who participated in the US alone for Earth Day in 1970.

“In order to meaningfully act upon our changing climate, our children need more education about its causes, consequences, anticipated future impacts, and policy solutions,” said Rep. Lee in her House floor speech.

The resolution has been endorsed by numerous groups, including the American Federation of Teachers, Mom’s Clean Air Force, Sierra Club, and the Teacher’s Advocacy Committee. Support from these organizations indicates that calls for action surrounding the youth climate strikes are resonating with more established entities.

According to Gottlieb, finding allies among adults is critical for the youth climate movement.

Julia Pyper is a senior fellow with the Atlantic Council Global Energy Center. You can follow her on Twitter @JMPyper