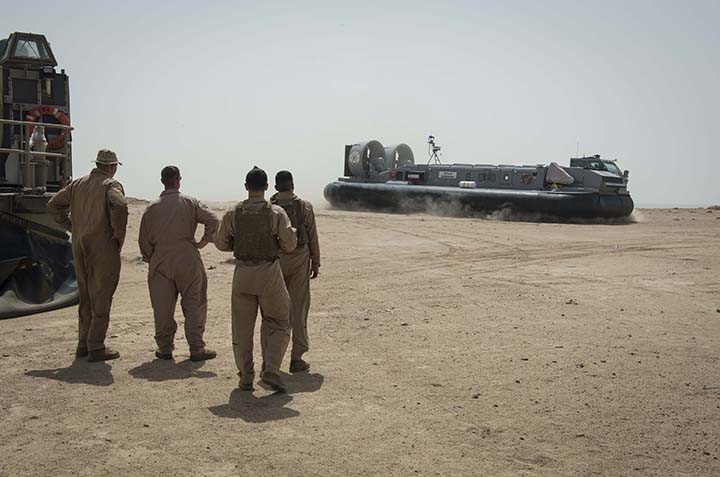 Sailors from Assault Craft Unit 4 watch as a Kuwaiti Coast Guard landing craft air cushion touches down on the beach during preparations for Eagle Resolve 2015. Eagle Resolve is a multilateral exercise designed to enhance regional cooperative defense efforts of the Gulf Cooperation Council nations and US Central Command. Credit: US Navy

A quarter-century after the fall of the Berlin Wall and the collapse of the Soviet Union, leading authoritarian regimes are thriving in the twenty-first century global security environment. As Freedom House reports, “fundamentally antidemocratic governments have strengthened their hold on power by making at least some of the common set of concessions – largely illusory in nature – to the world’s prevailing democratic order.”

In fact, many have adopted quasi-democratic practices such as political competition, rule of law, and economic openness in order to appear more legitimate in the eyes of the international community. This is because the liberal world order provides the capital, globalized markets, and free-flowing goods they need to maintain power over their increasingly connected, internationally aware, and informed citizens.

Evident in this trend is the fact that regimes have taken advantage of globalized communications and advanced technologies to harness greater control; and dictators have more elusive and powerful tools of monitoring and censorship available at their fingertips. Meanwhile, the global resurgence of authoritarianism has tremendous implications not only for citizens living under their grip, but also for US national security interests.

The Strategic Foresight Initiative’s “Future of Authoritarianism” project at the Atlantic Council addresses this global phenomenon and aims to make the case that democracy assistance is a vital national interest that must be addressed collectively by actors from all levels of US government, the nongovernmental organization (NGO) community and civil society. Bridging the gap between the security and democracy communities is a key step in this endeavor.

This security-democracy nexus brings together tools of diplomacy, civic activism, military-to-military engagement, and foreign assistance to effectively integrate security and governance efforts in countries where the United States is working alongside foreign militaries.

Critical issues include how to identify and employ the right tools to influence the behaviors of militaries and regimes in non-democracies, how to use military leverage to challenge corruption and increase transparency, and how to reconcile security objectives with human rights and democracy concerns.

Indeed, the US government and its partners can and should be doing more to use its military engagements and relationships to advance democracy in pivotal regions around the world where the United States has national security interests at stake. The lack of fully integrated efforts in recent years has led to several missed opportunities by the United States to engage countries on the edge of democratic progress and security reform, where a small US investment could have made a big difference.

Many stark realities stand in the way of successfully applying security cooperation to improving governance in non-democratic states. First, traditional tools of US security assistance and democracy promotion are not enough to influence authoritarian governments deeply committed to maintaining power and control over their populations. Second, US security assistance, although substantial, is often not enough to influence how countries choose to govern and address human rights concerns. Third, the current security environment makes for strange bedfellows when it comes to US partnerships on counterterrorism and countering violent extremism.

That said, there are several approaches the United States can adopt in order to more effectively use its military influence to affect democratic progress. Among the four levels of US strategic partnerships – individual, tactical, operational, and institutional – the United States must focus more on the individual and institutional. On the individual level, US initiatives to train and educate senior military officers in authoritarian countries must identify and facilitate the best and most professional individuals so that US training programs do not advance the careers of corrupt military officials.

On the institutional level, there is strong consensus among experts that empowering individuals without improving governance and institutions can be potentially destabilizing. Iraq under Saddam Hussein serves as an example of where weak defense institutions allowed for personality-driven decisions and rampant corruption.

Efforts geared toward train-and-equip missions are also less effective without attention to institutional development. Building strong and accountable defense institutions is essential to combatting destabilizing elements of authoritarian governments, which can breed the very security threats the United States seeks to defeat.

Too often, authoritarian regimes “check the box” on human rights and democracy promotion in order to receive US technical and military assistance. In these cases, operational specifics matter: discussions with foreign militaries should involve not only what the United States is willing to give, but also what the United States expects in return. Measures of conditionality should be accompanied by government and NGO “swat teams” on human rights training in order to ensure that human rights criteria are fully met.

Importantly, monitoring and evaluation must accompany all democracy assistance and security cooperation initiatives in order to measure the impact of US programs on the professionalization of foreign security and military partners. How we measure outcomes and changed behavior is a critical component of capacity building.

Military diplomacy is another underdeveloped lever of influence. At home, we must do a better job of training US military officials to carry out diplomatic and policy efforts, if they are to continue doing the work of diplomats in crisis situations around the word. Former Director of National Intelligence Admiral Dennis Blair’s handbook on how to prepare military officers and defense officials to support democratic transitions is an important resource that should be more mainstream at professional military universities and centers.

Moving forward, many hurdles exist on the path to effectively integrating security and governance efforts. However, now is the time to double-down on responding to repressive and corrupt authoritarian regimes in countries and regions where US national security interests are at stake. Simply put, the United States and its allies can and should take full advantage of military partnerships to move dictatorships toward democracy.

Deeper engagement on institutional development and relationship building with military and civil society partners in non-democratic countries will ensure that US efforts to combat terrorism and violent extremism are met with longstanding improvement for local citizenry and success for vital US interests.

Torrey Taussig is a PhD Candidate in International Relations at the Fletcher School of Law and Diplomacy at Tufts University. She contributes to the Future of Authoritarianism project at the Brent Scowcroft Center’s Strategic Foresight Initiative.