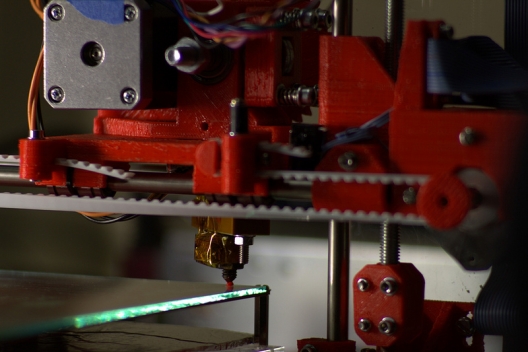 The Revolutionary Impact of 3D Printing

The Economist has hailed 3D printing (3DP) as the foundation of the Third Industrial Revolution. 3D printing is a process of layering to make things rather than carving them out of pieces of material. Although the basic 3D printing technology was invented three decades ago, it has reached a take-off point as computer-aided design, big data, cloud computing, and new materials have combined to enhance the capability and reduce the cost of 3D printing. As President Barack Obama noted in his 2013 State of the Union address, 3D printing “has the potential to revolutionize the way we make almost everything.”

The 3D printing revolution is happening from both “top down” and the “bottom up.” Leading global manufacturers such as General Electric, Boeing, Airbus, and Ford are using high-end 3D printing machines to transition from rapid prototyping to producing critical parts for airplanes, automobiles, wind turbines, and a myriad of other machines. From the bottom up, the 3D printing revolution has been driven by the “do it yourself” (DIY) movement with tens of thousands of users buying personal 3D printers for experimentation or starting their own mini-manufacturing enterprises.

There is a reason so much attention has been focused on 3D printing, although other advanced manufacturing capabilities are also contributing to the Third Industrial Revolution. 3D printing is a transformative technology that offers extraordinary structural benefits over traditional manufacturing. In traditional manufacturing, the more complicated a product, the more expensive it is to manufacture—if it is even possible to make it at all. By contrast, 3DP is a “single tool” process—no matter the desired geometry, there is no need to change any aspect of the process.

Since printing one-of-a-kind products with a 3D printer is no more costly than mass producing the same object, 3DP technology enables the design and efficient manufacture of personalized products. This unique capability of 3DP is driving a transition from mass production to mass customization.

3D printing is a “general purpose technology” that is likely to be used in an enormous range of applications, from printing human organs and food to printing airplane wings and large structures, including houses, large buildings, and even bases on the moon and Mars. NASA recognizes 3D printing as a critical technology for space exploration. The space agency has already commissioned the development of 3D printers for the International Space Station (ISS).  While the first IIS 3D printers will be for printing spare parts, NASA has also commissioned development of 3D printers for food and for building structures on the Moon.

3D printing is likely to have a number of significant impact on society beyond new ways of making things. This could including moving designs, not products, around the world. The Internet first eliminated distance as a factor in moving information instantly across space. Now sending digital files over the Internet instead of making and shipping physical products has the potential to transform the distribution material things, much as MP3 technology has changed the distribution of music.

3D printing also could reduce and even eliminate supply chains and assembly lines for many products. Manufacturing could shift from large-scale assembly of thousands of parts produced by subcontractors into millions of final products by tens of thousands of workers at a few massive factory complexes to the on-demand printing of small numbers of the same products in thousands of locations around the world by a handful of workers in each local production facility.

3DP is thus also likely to play a significant role in development of economic and environmental sustainability by dramatically increasing the efficiency of resource use and in lowering overall carbon emissions from the process of manufacturing to delivering products to the end user. 3DP also can reduce or eliminate the use of toxic chemicals often used in conventional manufacturing processes.

For some developing countries, 3D printing might be as economically transformative in the material world as the cell phone has been in the digital world, bringing them many of the benefits of advanced manufacturing. Many emerging market countries, especially in Africa, do not have significant manufacturing capabilities and rely instead on massive imports, including of basic consumer goods. They also have large numbers of unemployed, many with sufficient education and with entrepreneurial drive to build new businesses around 3D printing. The cost of establishing a basic 3D printing facility—a computer, printers, materials and Internet access—could be less than $10,000, while building a conventional factory might require millions of dollars of investment. And unlike a traditional factory that requires expensive and time-consuming retooling for different products, the 3D printing facility could produce an unlimited number of different products without retooling and make products on demand for the local market.

The pace of development and implementation of 3DP is, of course, uncertain, and is likely to vary widely for different types of manufactured products. For the foreseeable future, many consumer products will continue to be cheaper to mass produce by traditional methods and shipped to points of consumption, especially simple products produced in huge numbers. Nevertheless, there will likely be tipping points in various fields of production, triggering manufacturers to change to the new process or lose their competitive edge.

On the horizon beyond 3D printing is “4D printing” or “programmable matter,” in which the fourth dimension is time. This will be a world in which 3D printing produces material objects that are programmed to change their form (shape) and function (capabilities) and can even be commanded to disassemble into microscopic, “intelligent” particles or “voxels,” and then reprogrammed to become entirely different material objects. Potential applications of programmable matter might include airplane wings that change shape in flight; buildings that transform as desired for different functions, conserving space, cost and the environment; infrastructural systems that adapt to loads or weather; furniture that is packaged flat but self-assembles after purchase; shoes, clothes and sportswear that adapts to the user’s performance or the changing environment; and objects that disassemble for protection of private information, recyclability, or self-repair. The emerging outlines of 4D printing’s potential suggest a wide range of implications for security and the military as well as a potential transformative impact on the economy and entire society.