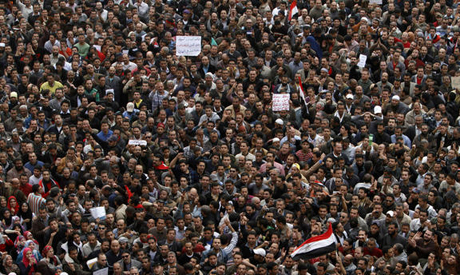 “Disruptive change” that produces “strategic shocks” has become an increasing concern for policymakers, shaken by momentous events of the last couple of decades that were not on their radar screens – from the fall of the Berlin Wall and the 9/11 terrorist attacks to the 2008 financial crisis and the “Arab Spring.”

These were all shocks to the international system, predictable perhaps in retrospect but predicted by very few experts or officials on the eve of their occurrence.

This “failure” to predict specific strategic shocks does not mean we should abandon efforts to foresee disruptive change or look at all possible shocks as equally plausible. Most strategic shocks do not “come out of the blue.” We can understand and project long-term global trends and foresee at least some of their potential effects, including potential shocks and disruptive change. We can construct alternative futures scenarios to envision potential change, including strategic shocks. Based on trends and scenarios, we can take actions to avert possible undesirable outcomes or limit the damage should they occur. We can also identify potential opportunities or at least more desirable futures that we seek to seize through policy course corrections.

We should distinguish “strategic shocks” that are developments that could happen at any time and yet may never occur. This would include such plausible possibilities as use of a nuclear device by terrorists or the emergence of an airborne human-to-human virus that could kill millions. Such possible but not inevitable developments would not necessarily be the result of worsening long-term trends. Like possible terrorist attacks, governments need to try to prepare for such possible catastrophes though they may never happen.

But there are other potential disruptive changes, including those that create strategic shocks to the international system, that can result from identifiable trends that make them more likely in the future—for example, growing demand for food, water, energy and other resources with supplies failing to keep pace. We need to look for the “sand piles” that the trends are building and are subject to collapse at some point with an additional but indeterminable additional “grain of sand” and identify the potential for the sudden appearance of “butterflies” that might flap their wings and set off hurricanes. Mohamed Bouazizi, who immolated himself December 17, 2010 in Sidi Bouzid, Tunisia, was the butterfly who flapped his wings and (with the “force multiplier” of social media) set off a hurricane that is still blowing throughout the Middle East. Perhaps the metaphors are mixed, but the butterfly’s delicate flapping destabilized the sand piles (of rising food prices, unemployed students, corrupt government, etc.) that had been building in Tunisia, Egypt, and much of the region. The result was a sudden collapse and disruptive change that has created a strategic shock that is still producing tremors throughout the region. But the collapse was due to cumulative effects of identifiable and converging trends. When and what form change will take may be difficult if not impossible to foresee, but the likelihood of a tipping point being reached—that linear continuation of the present into the future is increasingly unlikely—can be foreseen.

Foreseeing the direction of change and the likelihood of discontinuities, both sudden and protracted, is thus not beyond our capabilities. While efforts to understand and project long-term global trends cannot provide accurate predictions, for example, of the GDPs of China, India, and the United States in 2030, looking at economic and GDP growth trends, can provide insights into a wide range of possible outcomes. For example, it is a useful to assess the implications if the GDPs of these three countries each grew at currently projected average rates – even if one understands that there are many factors that can and likely will alter their trajectories. The projected growth trends of the three countries suggest that at some point in the next few decades, perhaps between 2015 and 2030, China’s GDP will surpass that of the United States. And by adding consideration of the economic impact of demographic trends (China’s aging and India’s youth bulge), there is a possibility that India will surpass both China and the US, perhaps by 2040 or 2050, to become the world’s largest economy. These potential shifts of economic power from the United States to China then to India would likely prove strategically disruptive on a global scale. Although slowly developing, such disruptive change would likely have an even greater strategic impact than the Arab Spring. The “rise” of China has already proved strategically disruptive, creating a potential China-United States regional rivalry in Asia two decades after Americans fretted about an emerging US conflict with a then-rising Japan challenging American economic supremacy.

Despite uncertainty surrounding projections, foreseeing the possibility (some would say high likelihood) that China and then India will replace the United States as the largest global economy has near-term policy implications for the US and Europe. The potential long-term shift in economic clout and concomitant shift in political power and strategic position away from the US and the West and toward the East has implications for near-term policy choices. Policymakers could conclude, for example, that the West should make greater efforts to bring the emerging (or re-emerging) great powers into close consultation on the “rules of the game” and global governance as the West’s influence in shaping institutions and behavior is likely to significantly diminish over the next few decades. The alternative to finding such a near-term accommodation could be increasing mutual suspicions and hostility rather than trust and growing cooperation between rising and established powers—especially between China and the United States—leading to a fragmented, zero-sum world in which major global challenges like climate change and resource scarcities are not addressed and conflict over dwindling resources and markets intensifies and even bleeds into the military realm among the major actors.

Neither of these scenarios may play out, of course. Other global trends suggest that sometime in the next several decades, the world could encounter a “hard ceiling” on resources availability and that climate change could throw the global economy into a tailspin, harming China and India even more than the United States. In this case, perhaps India and China would falter economically leading to internal instability and crises of governance, significantly reducing their rates of economic growth and their ability to project power and play a significant international role than might otherwise have been expected. But this scenario has other implications for policymakers, including dangers posed to Western interests from “failure” of China and/or India, which could produce huge strategic shocks to the global system, including a prolonged economic downturn in the West as well as the East.

Policymakers and the public will press for predictions and criticize government officials and intelligence agencies when momentous events “catch us by surprise.” But unfortunately, as both Yogi Berra and Neils Bohr are credited with saying, “prediction is very hard, especially about the future.” One can predict with great accuracy many natural events such as sunrise and the boiling point of water at sea level. We can rely on the infallible predictability of the laws of physics to build airplanes and automobiles and iPhones. And we can calculate with great precision the destruction footprint of a given nuclear weapon. Yet even physical systems like the weather as they become more complex, become increasingly difficult and even inherently impossible to predict with precision.

With human behavior, specific predictions are not just hard, but impossible as uncertainty is inherent in the human universe. As futurist Paul Saffo wrote in the Harvard Business Review in 2007, “prediction is possible only in a world in which events are preordained and no amount of actions in the present can influence the future outcome.” One cannot know for certain what actions he or she will take in the future much less the actions of another person, a group of people or a nation state. This obvious point is made to dismiss any idea of trying to “predict” what will occur in the future with accuracy, especially the outcomes of the interplay of many complex factors, including the interaction of human and natural systems. More broadly, the human future is not predetermined but rather depends on human choices at every turning point, cumulatively leading to different alternative outcomes. This uncertainty about the future also means the future is amenable to human choice and leadership. Trends analyses—including foreseeing trends leading to disruptive change—are thus essential to provide individuals, organizations and political leaders with the strategic foresight to take steps mitigate the dangers ahead and seize the opportunities for shaping the human destiny.

Peter Schwartz nearly a decade ago characterized the convergence of trends and disruptive change as “inevitable surprises.” He wrote in Inevitable Surprises that “in the coming decades we face many more inevitable surprises: major discontinuities in the economic, political and social spheres of our world, each one changing the ‘rules of the game’ as its played today. If anything, there will be more, no fewer, surprises in the future, and they will all be interconnected. Together, they will lead us into a world, ten to fifteen years hence, that is fundamentally different from the one we know today. Understanding these inevitable surprises in our future is critical for the decisions we have to make today …. We may not be able to prevent catastrophe (although sometimes we can), but we can certainly increase our ability to respond, and our ability to see opportunities that we would otherwise miss.”