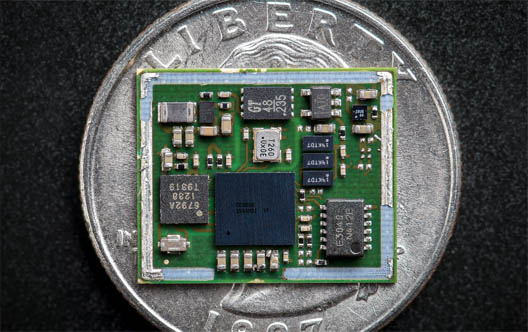 The Internet is moving beyond a portal to another world and becoming part of the very world itself, meshing with and augmenting physical reality. The idea of the “Alive Web” sees the Internet becoming an increasingly real-time affair.  We are in the beginning. Apps like Snapchat and Twitter already represent the new pace and face of the new web: it’s nearing real-time, and it involves us directly. No longer about stale ‘feeds’ and static data, but experiences and emotions in the present. Less about user names and pseudonyms and more about identity strewn across the world, ready to interact with anything. Not snippets of text and culled media, but a nuanced and raucous interactive conversation happening across the globe. Forget myriad disparate websites and links; imagine an ever-growing pool of everything being fed by a never-ending deluge of data. This is the Internet of tomorrow.

The future will be powerfully defined by the emergence of servile computing, enabled by powerful contextual information. No more asking for help, future computing will simply provide it -from sensors on the device itself, sensors on your body reporting your bodily state, and the coming wealth of ambient information available from the “Internet of Things” along with, of course, the huge amounts of data exhaust we all leave behind in living our cyber lives. Combined with clever and powerful processing, these huge swaths of data can transcend noise and become salient real-time answers. The push toward ubiquitous mobile computing all but demands the emergence of the next generation of search engines, or more accurately, Answer Engines. No more clunky queries, no more digging through links, no more breaking flow, just the answer you want when you need it.

Currently, when you have a question that cannot be answered within your brain, you must take it upon yourself to seek the answer. This has become so ubiquitous and easy that it merely takes a few taps on a device in your pocket and dozens of answers appear before you. Yet the burden is still on the user, to format the question within guidelines, to cull the answer from myriad sources and arrive at a conclusion. It is still very much a process of actively seeking, which often constitutes a break in flow, if only just a brief one.

I use the term “Answer Engine” as a catch-all phrase for powerful artificial semi-intelligences—think IBM’s Watson Jeopardy champion— fed by immense sources of data from individuals and environment, coupled with the fluidity of interaction that will characterize the coming wearable modalities of computing. Already the search engine-powered Internet has become part of working cognition, and the Answer Engine-powered Internet likely will see this role increase to the limits of our current imagination.

Interacting with the Answer Engine Internet will be characterized primarily by very little actual interaction. The Answer Engine — if you choose to enable its features — can listen to your conversations and do searches on key terms or concepts automatically. The Answer Engine hears you humming along to some tune and can find it for you for later listening. The Answer Engine knows where you are and knows what you’re interested in. It can make suggestions about where you might like to be, or where your schedule says you’re supposed to be. The Answer Engine might even have access to where your gaze is pointed and can infer interest, querying relevant details automatically based on objects, people, locations – anything it thinks you’re interested in. It might even have access to detailed information about your bodily state and help guide you in regulating your health. If you allow it, it might even have access to do this via small wearable medication injection systems or more exotic Nano-machines, biological or otherwise. This is no longer merely about search and ‘social’ applications; this is an extension of self, of mind.

Aside from answers to daily problems and questions, the Answer Engine’s powers will scale exponentially for providing more complex answers. It will have increasing access to networked artifacts and sensors via the “Internet of Things.” The Answer Engine can be used to provide real-time answers to queries about the current state of almost the entire Earth, scaling elegantly from a single room to the entire planet and beyond. It will also have access to networks of connected cameras, terrestrial, and orbital. On a lark, you could have it deliver answers to queries that are almost impossible to address today.

For example, combining its access to sensors, location data for every connected human and artifact, computer vision, and the global mesh of cameras, you could ask it–in natural language–something like, “when it next rains in Paris, count the number of yellow umbrellas seen from beginning of rainfall out 5 minutes; do this for 5 rain days and report the average number of Parisians with yellow umbrellas for this period. Correlate observed location of umbrella with individuals’ locations and ignore duplicates. Report margin of uncertainty.” Useful? Perhaps not. Representative of statistical inference abilities unheard of at any cost today? Very much yes. Of course the data that a badly worded query like this would generate would be full of problems, but think what it represents. Imagine what kinds of questions you might like to ask it, and imagine if you could ask as many as you would like; think of the questions such answers would lead to!

The Answer Engine is about smashing together data from any and all sources available, and future sources of data are set to increase exponentially. Its powers of inference will only grow, and every question it answers or query it receives will be catalogued and recombined to provide better answers in the future, to hone its intelligence further.

While the Answer Engine Internet itself is a powerful amalgamation of artificial intelligence (AI), it also knows humans who might have an answer for you. If you require complex assistance beyond its scope, it might facilitate a connection to someone who can help. The Internet of the future knows where everyone is and can even coordinate them in “meat-space” if so desired. This is the longer-term future of the Answer Engine Internet, presenting all users with a seamless river of relevant information built from unifying human and software abilities and knowledge into one useful whole.

For example, a little marker might appear in your field of view pointing you to a human near you who shares your interest on a topic or can help you with a 3D-space project. Or you could instantly give an expert access to your current view and have her help you through the problem, likely for a small fee. If today’s networked youth are any indication, many users will opt-in to this system. Providing a way to seamlessly engage with new people anywhere on Earth, requiring only the desire to do so; perhaps only coming together to solve a problem or provide an answer, never to see each other again. As the Internet and physical reality merge, we’ll see online paradigms and modalities of community and interaction rub off on the physical world and vice versa.

Collaboration as fluid and dynamic as meat-space interaction, but no longer limited by physical barriers or confines. The online/offline distinction is dying and in its place a new kind of hybrid reality is emerging. No longer just running parallel to the physical world, but intricately woven into it; responsive and aware, but also affective. The Internet of the future is ubiquitous. The fluidity of querying your own mind applied to the global mind. Software and human voices aggregated together into a seamless whole. As search engines enabled the indexing of data, Answer Engines will enable us to do something with it.