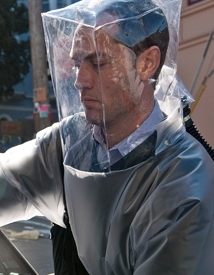 “…Once it may have been hard to buy the swift collapse of order that is made palpably real in ‘Contagion,’ if Hurricane Katrina and its aftermath had not already set the stage. ..Yet what’s really scary in “Contagion” is how fast once-humming airports and offices, homes and cities empty out when push comes to shove comes to panic in the streets.” –New York Times review of ‘Contagion’

As if Hollywood biothrillers were not enough, in recent years we’ve witnessed our government’s uneven management of natural and unnatural disasters, from 9/11 to Katrina to a publicly botched roll-out of a government website. On the global stage we watch helplessly as the international community struggles with the basic needs of hurricane victims in the Philippines or refugees of an endless civil war in Syria. As we peer into the future, we have every reason to feel queasy about the profound impact of the second technological revolution bearing down upon us.

The world is on the cusp of another technological transformation more profound than the IT revolution. Yet the United States is not prepared for potentially virulent consequences of many of the emerging technologies, nor is it well-positioned to take full advantage of the benefits. Finding the delicate balance between government regulation and beneficial innovation will present additional challenges to an already chaotic policymaking apparatus.

The non-Hollywood version is that synthetic biology is both the most promising potential emerging technology and the most dangerous. At its simplest, synthetic biotech involves harnessing cellular and biomolecular processes hugely enhanced by the convergence with a wide range of other technologies — ICT, gene sequencing, and 3D printing — to develop new previously unimaginable capabilities. 3D bioprinting of organs or meat for food are just a few of the possibilities. In a global pandemic, synthetic biology would speed the time needed to develop a vaccine and could send the digitized vaccine sequence to be bioprinted for immediate use. However, the ease associated with synthetic biology, including the low cost and wide availability of materials and capabilities, is a source of profound danger. With synthetic biology, we have the ability to alter viruses to become deadlier or to create wholly new lethal microorganisms by accident or intentionally.

The latest craze, 3D printing, has not only reached a takeoff point in transforming US manufacturing and disrupting global supply chains, but could accelerate economic development in places such as Africa that do not have significant manufacturing capability and rely on massive imports. However, there are very problematic security downsides such as 3D printing of guns and improvised explosive devices that will make control of lethal arms more difficult.

Developers are extending the capabilities of robots, crossing the boundary between industrial and non-industrial. The problem is that robots — including digital ones — could replace too many workers before new jobs can be created, exacerbating wealth and income gaps. A growing backlash against new technologies, and the loss of low-end jobs, could create an increasingly divided country between the technological “haves” and “have-nots.”

Drone technology is increasingly cheap and globally available. Not only can a 9-year-old buy a drone at the local toy store, but nonstate actors can build a drone in a garage to carry out lethal attacks and surveillance. Robotic weapons systems with the ability to autonomously make “kill decisions” are possible and could extend to robotic soldiers.

Additionally, the payoff for the United States from the shale energy revolution has already been significant. Since 2008, the United States has gone from an importer to possibly the world’s largest producer of hydrocarbons. Strategically, the United States will soon be in a position to challenge Organization of the Petroleum Exporting Countries (OPEC) control of oil markets and bolster the US position with its Asian partners–Japan, South Korea, and Taiwan–who are major gas importers. Legitimate concerns over methane leaks, water pollution, and minor earthquakes are still being examined. If not addressed quickly by energy firms and regulation, this risk factor could undermine the Shale revolution and with it, major US security interests.

The time for a national conversation is long overdue. In the short term, a few solutions should be considered:

The technological revolution is exciting and bursting with opportunity. But, just like the bio-virus in Contagion, a happy ending requires decisive leadership and close coordination between government, science, business, and civil society.

Mathew J. Burrows, a former counselor at the National Intelligence Council, is director of Atlantic Council’s Strategic Foresight Initiative and author of the Atlantic Council report Envisioning 2030: US Strategy for the Coming Technology Revolution.