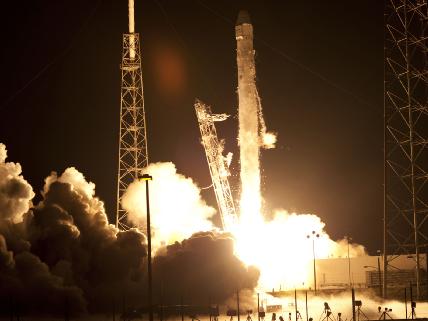 Faced with deep cuts in its operating budget, NASA has undertaken efforts to broaden international cooperation and establish a domestic commercial space industry. With the space shuttle now retired, NASA needs a way to get large amounts of cargo and personnel into space, and private companies are the only ticket up.

Last month, SpaceX successfully flew the significantly less dramatic first commercial resupply mission to the International Space Station. SpaceX and rival Orbital Sciences Corporation’s contracts with NASA to fly a series of cargo missions will serve as an important indicator for other industry giants about the risks of commercial space flight. Private aerospace ventures have literally been promising the moon to clients for years, even as construction and project deadlines are repeatedly pushed back. This time it may be different, and the true game-changer is coming not from any one project but from the overall trend: falling costs of space launches and operations in a number of areas are lowering the barriers to access. The lowering of barriers, in turn, feeds more interest and innovation. SpaceX is already is developing a vertical take-off and landing system that could be used to safely return flights to earth without the damaging controlled crashes into the ocean. It has begun buying land in the south of Texas in anticipation of building rocket launch pads, and it is already in design reviews with NASA for manned versions of the Dragon spacecraft that successfully docked with ISS.

Writing in Nature, aerospace consultant Alan Stern argues that commercial space firms are on track to revolutionize suborbital flight research by marketing flights in reusable vehicles at a tenth of the cost of the current single-use craft. The impact on microgravity research, he says, will be analogous to the impact of the rise of personal computers on computing access. Still, market research suggests that commercial human spaceflight – for tourism and training purposes as opposed to research or satellite deployment purposes – is by far the dominant market demand, with over 3,000 individuals possessing the wealth and interest necessary to charter personal spaceflight for tourism purposes alone. Virgin Galactic announced a total of 529 such persons have already signed up for a $200,000 two-hour suborbital flight in one of their SpaceShipTwo crafts. For those of lesser means, the CubeSat concept, in which users with little to no space experience purchase moderately customizable nanosatellite kits made by small companies, is spurring amateur satellite use in a way roughly analogous to the Maker movement’s effects in manufacturing.

Nor is innovation coming from the private sector alone. DARPA’s Phoenix Program could dramatically decrease the costs of introducing new technology into space through the development of fleets of “satlets,” which can be launched into space on board a commercial rocket, and used to harvest still-functional antennae, solar arrays, and other components from Earth’s estimated $300 billion orbital graveyard of defunct satellites. NASA’s pursuit of ISS crew transportation through commercial ventures is prompting debate over business models; for example, a “taxicab” model would have NASA deliver its crew to a site operated by the contractor, and the operator would take responsibility for getting them to space and returning them when they are done, while a “rental car” model would mean that the contracting company could turn over a vehicle for a pre-determined duration, say 6 months, and NASA itself would operate the launch and return of the vehicle. What choice NASA ultimately makes could have a large impact on the future character of commercial space travel.

Falling costs and ever-increasing commercial involvement are themselves enough to revolutionize any industry, especially one so famously expensive and state-oriented. When coupled with the enduring power of space to excite the public imagination, the 21st century may yet be the Space Age of which many have dreamed.