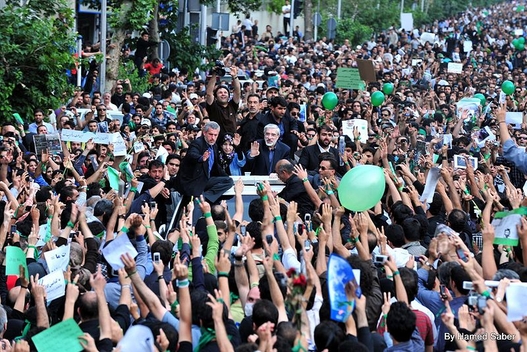 To those on the ground, the vote result was obviously rigged. The margin of victory by incumbent hardliner Mahmoud Ahmadinejad was grossly out of line with previous and subsequent Iranian election results with high turnouts. The vote-counting process was completely opaque.A system for verifying the vote and to prevent cheating on June 12, 2009, developed by lead opposition candidate Mir-Hossein Mousavi’s campaign, was sabotaged by the unexpected shutting down of the text-messaging system throughout the country.

Most importantly, neither of the three candidates opposing Ahmadinejad accepted the initial results of the elections, and even the speaker of the parliament Ali Larijani, voiced initial doubts about the fairness of the vote-counting.

Those who were there, like this author, remember the grim atmosphere. After the closing of the polls, the regime’s shadowy gremlins began shutting down campaign offices of Mousavi and fellow reformist candidate Mehdi Karroubi, rounding up opposition activists and the next morning moved in on protesters with truncheons and tear gas.

Then on June 15, 2009, came another shock, one of the most stunning moments in Iranian history.

Heeding calls by Mousavi and Karroubi—then still free to move about—millions of Iranians defied the security forces and the admonitions of top officials and flooded into the streets of Tehran, Isfahan, Shiraz and other cities, rejecting election results, and calling out the vote for the obvious fraud that it was.

The massive crowd—many wearing the green color of the Mousavi campaign—topped those of regime supporters bussed in for regime holidays and enticed with promises of a free trip to the capital and free meals. It was an unprecedented display of people power not seen since 1979.

After shaking off the blow, the regime responded with calibrated force, eventually beating the protesters back off the streets after killing dozens, staging show trials, rounding up leaders, and sentencing activists to lengthy prison terms. Years later, in 2011, Mousavi and Karroubi were put under house arrest that lasts until this day.

Despite this, the legacy of the Green Movement lingers. Its supporters propelled the moderate Hassan Rouhani to the presidency twice. A decade after the uprising, slogans such as “death to the dictator” and gestures of that protest movement—such as green ribbons—trickle out at occasional labor, environmental, and political protests throughout the nation. In retrospect, the botched election, the uprising and the subsequent repression provided some lessons about contemporary Iran.

Elections have consequences: Many Iranians don’t participate in elections. The candidates for the presidency, parliament and other national offices are vetted by the powerful, hardline Guardian Council. Nevertheless, the outcomes of the vote are significant. The races are competitive and going against the will of the people is dangerous. The 2009 uprising will make any Iranian leader think twice about rigging a future vote.

Fire under the ashes: By and large, the Iranian public boils with anger at the regime and the dead ends to which it has brought the nation. Slogans during the uprising quickly escalated from opposition to the election to defiance against the entire Islamic Republic. The episode showed there is a groundswell of hard opposition to the regime and it is far deeper and wider than the leadership grasped before 2009.

The Square: The protesters flooded into Tehran’s Azadi Square on June 15, 2009 but trickled back home as dusk settled. In retrospect, they should have set up tents, and stayed put. The battle for public space is crucial to challenging a regime that stakes its reputation and legitimacy on controlling the streets, especially in Tehran.

Violence as a tool, not an end: The regime responded to the protests with force, but unlike its client Bashar al-Assad in Syria, cleverly avoided large-scale massacres, instead initiating violence that left at most scores dead over the course of months, thereby avoiding too much international attention and the all-out wrath of the public.

The limits of sacrifice: The protesters, by and large, sought to avoid violence, and mostly began scampering home as soon as the protests became too frightening. They were willing to sacrifice their time, but not their lives and their futures. The regime, on the other hand, quickly showed it would fight tooth and nail to retain its grip.

The limits of social media: Twitter and Facebook played key roles in helping organize and publicize the uprising, but a political movement needs real organization and a leadership structure, which the Green Movement lacked.

Reform lives: Despite the bad rap it has gotten in Iran and abroad, the idea of changing Iran from within without a radical toppling of the regime remains a powerful and potent one, and the reformists retain a major foothold in the Iranian political universe.

Breadth as well as depth: The 2009 uprising was by and large led by middle-class urban elites, and failed to draw lower and lower-middle class Iranians from the smaller cities and provinces. Nearly a decade later, Iranians in small provincial towns and cities took to the streets demanding change during the December 2017 – January 2018 protests, but by and large failed to draw in Green Movement supporters in big cities. Ayatollah Ali Khamenei, or whoever is supreme leader of the Islamic Republic, will rue the day when the various segments of Iranian society opposed to the regime come together. That day has not yet arrived.

Image: Mir-Hossein Mousavi and his wife, Zahra Rahnavard, during the sixth day of demonstrations on June 18, 2009 (Wikimedia Commons)