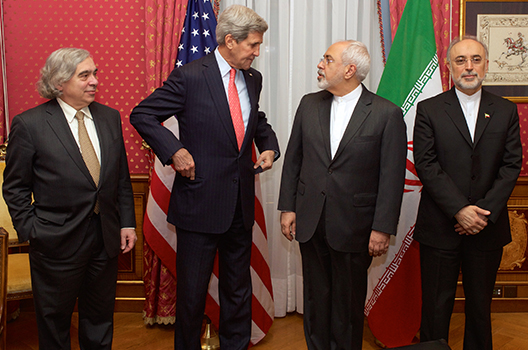 A year after it was reached, a landmark nuclear agreement with Iran has met its primary goals but remains challenged on multiple levels by those who never supported the deal and oppose reconciliation between the Islamic Republic and the United States.

In the U.S. Congress, Republicans and some Democrats have sought to impose new sanctions on Iran to deprive Iranians of benefits they were promised in return for accepting stringent curbs on their nuclear program. This includes efforts in the House of Representatives to pass legislation to block a proposed multi-year, multi-billion dollar sale of civilian airliners by Boeing to replace Iran’s dangerous, antiquated planes.

Continuing U.S. sanctions on most other American business interaction with Iran – especially Iran’s exclusion from any contact with the U.S. financial system – have added to foreign reluctance to re-engage the Iranian market even though foreign trade with and investment in Iran is no longer prohibited.

Iran’s own systemic weaknesses are also at fault; David Lipton, a top American working for the International Monetary Fund who recently visited Iran, compared the challenges of reforming the Iranian economy to those faced by Eastern European countries after the end of Soviet control.

Although Iran has pulled out of recession since the Joint Comprehensive Plan of Action (JCPOA) was signed and its GDP is expected to grow by 4 percent this year, unemployment remains in double digits. In a recent poll, a majority of Iranians said they still supported the nuclear agreement but doubted that the United States would fulfill its obligations. Two thirds of Iranians said they believe that the U.S. is trying to discourage foreign companies from investing in Iran, something U.S. officials strenuously deny.

Although the Barack Obama administration made clear from the start that it was signing the JCPOA for non-proliferation purposes, there was also the hope that it would bolster the pragmatic government of Iranian President Hassan Rouhani and lead to improved relations between Iran and the United States.

A year on, both hopes are in jeopardy.

Rouhani remains the most popular political figure in Iran but less admired than he was a year ago, according to the recent IranPoll.com survey. More ominously, his controversial predecessor Mahmoud Ahmadinejad – who is planning to challenge Rouhani in presidential elections next year — is seeing a rise in popular support. According to the poll, 45% of Iranians would vote again for Rouhani, down from 53.4% a year ago, while 36.7% would choose Ahmadinejad, a jump of 10.1 percentage points from May 2015.

Chances for broader reconciliation with the United States are also in doubt, particularly after Obama leaves office. Both Iran and the United States will retain representatives on a joint commission set up to implement the JCPOA. But it is questionable whether Iranian Foreign Minister Javad Zarif will be able to develop the close relationship he has had with fellow negotiator John Kerry once Kerry is replaced by a new secretary of State.

If Hillary Clinton is elected president, as current polls suggest is likely, she is apt to adopt a more hawkish tone toward Iran judging from her campaign rhetoric. Ever alert to foreign slights, Iran can be expected to respond in kind.

Iranian actions, of course, are also responsible for the continuing tension.

The Iranian Revolutionary Guards Corps (IRGC), the country’s most powerful military organization, is being pushed by Rouhani to relinquish some of its hold on the Iranian economy to facilitate foreign investment. But the IRGC has not loosened its grip on internal security and has continued to jail Iranian dual nationals – including an Iranian-American businessman, Siamak Namazi, and his 80-year-old father, Baquer –on trumped-up charges of conspiring against the state.

Such actions, along with Iran’s continued support for Syrian dictator Bashar al-Assad and for Houthi rebels in Yemen, have undermined chances for a broader diplomatic breakthrough between the U.S. and Iran – which is clearly the IRGC’s intent.

The best answer to the IRGC – and to those in Congress who keep trying to sink the nuclear deal – is to scrupulously uphold U.S. obligations and to continue to seek dialogue with Iran on as many issues as possible, as suggested in a recent letter to Obama signed by 75 U.S. national security experts. Iran can play a positive role in the war against the group that calls itself the Islamic State and has obvious influence over the fates of Syria and Iraq.
Obama’s successor should also not give in to pressure from Saudi Arabia to reflexively adopt an anti-Iran stance on issues where Iran has little involvement or where U.S. interests do not coincide with those of Iran’s Arab adversaries. Both the Saudis and the Iranians are guilty of using the other as scapegoats for serious internal failings and reckless foreign adventures. Washington should not be their enabler.

One of the more depressing events in the lead up to the July 14 anniversary of the JCPOA was the appearance of Saudi Prince Turki al-Faisal, a former ambassador to Britain and the United States, along with a dozen former U.S. officials at a conference in Paris last weekend of the Mujaheddin-e Khalq (MEK). This group, a Marxist-Islamist cult that supported the 1979 Iranian revolution and was on the U.S. State Department’s list of terrorist organizations from 1997 until 2012, is trying to assume a democratic veneer and has shelled out millions of dollars to buy influence in Washington. But it is widely detested in Iran because of its collaboration with Iraq during the Iran-Iraq war. Support for the MEK is a gift to Iranian hardliners and the IRGC, which use it as yet another excuse to crack down on legitimate dissent.

Iran’s youthful, well-educated population wants a better relationship with the United States and the West in general. While U.S. officials should never hesitate to push back against truly harmful Iranian policies, they should also never stop looking for opportunities to work with Iran in pursuit of common goals. The JCPOA, valuable in itself, provides a template.

Barbara Slavin is Acting Director of the Future of Iran Initiative at the Atlantic Council’s South Asia Center.