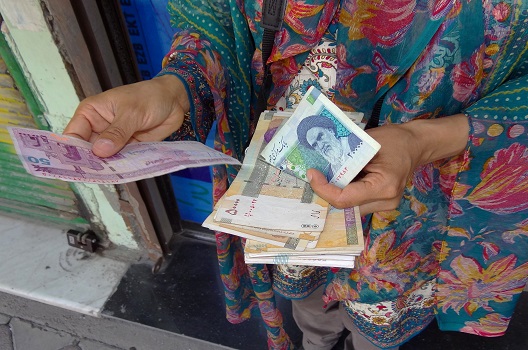 Iran’s currency, the rial, has experienced a historic low record crashing through 90,000 rials against one US dollar on the unofficial market and continuing its slide amid economic uncertainty caused by corruption, mismanagement and fear of returning US sanctions.

The drop in the value of the currency is having serious polictical repercussions. The development has encouraged Iranian merchants and shop owners to demonstrate against the government and go on strike in Tehran’s central market dedicated to sale and distribution of cellphone and electronic products.

Psychologically, the effect is significant because it has generated fear and uncertainty. Reminiscent of the last years of the shah’s rule, there are rumors that merchants in the bazaars in Tehran and provincial cities are hoarding, pushing up the price of basic foodstuffs.

To contain the currency crisis, the government of President Hassan Rouhani tried to go against the market by introducing a unified exchange rate of 42,000 rials to the dollar and took a number of harsh measures including detention of 100 prominent money changers for trying to exchange money at a different rate  and freezing speculators’ accounts as well as raising interest rates.

But the policy and exchange mechanism failed to arrest the depreciation of the rial in the unofficial market which, in turn, affected various economic sectors that need hard currency for transactions. Money changers stopped selling the dollar at the official rate. When money changers were forced to insert a 42,000 rial official price on their show boards, they would tell buyers, “We have no dollars for sale.” Second, the government supplied much less hard currency through official channels than the market was demanding.

The decision by the Central Bank of Iran to lower interest rates to less than 15 percent was another contributing factor to the failure of the policy. During recent years, Iranian banks have offered rates of up to 25 percent to compete for deposits against those who prefer to keep their money in dollars. Lowering interest rates pushed many individuals and businesses back towards trading the dollar.

But this is not the whole story. Experts introduced other contributing factors behind the rial collapse including a shortage of Central Bank foreign currency reserves, Iranian travelers’ demand for hard currency and smuggling.

Iran’s annual revenues from exporting oil and gas is approximately $50 billion. Of this amount, about $7 billion goes to the National Iranian Oil Company for exploration, equipment and renovation of aging fields.

The role that currency dealers (dalal-ha) or in the words of the Iranian Student News Agency (ISNA ) the “dollar mafia” play in the dollar rate’s fluctuations should also not be overlooked. But perhaps the key factor has been the psychological impact of the US withdrawal from the Joint Comprehensive Plan of Action on May 8. This encouraged foreign and domestic investors to take their capital out of Iran to Dubai and Istanbul to escape volatility and instability.

The dollar crisis has generated a heated debate among economic experts and political elites in Tehran. Economic experts offered various solutions ranging from “stopping the injection of the dollar into the free market,” and “unifying the dollar price,” to fighting the underground economy and letting the Central Bank of Iran become an independent entity.

Some politicians have urged direct negotiations with the United States to overcome the crisis. First vice president Eshaq Jahangiri, a reformist, is among those warning that Iran has entered into a “serious economic war” that may bring the economy to its knees, adding that no other countries, including “China and Russia are able to help” unless Iran “solves the problems with the Americans.” Reportedly, Foreign Minister Javad Zarif also told a group of economic activists that the current state of affairs cannot be fixed except through diplomacy, a clear reference to the direct negotiations with the United States.

Arman Newspaper, a pragmatist outlet, wrote that Iran will have tough days ahead and quoted Ali Khorram, a former Iranian ambassador to UN organizations in Vienna, as saying that Washington has a plan for Iran, similar to its three-staged plan to overthrow Saddam Hussein’s government in Iraq, which included imposing sanctions, creating an “oil for food” program to allow only limited oil exports tied to importing absolute necessities, and finally the military option.

Pragmatists understand that the survival of the system also requires domestic reforms that the conservatives have avoided during the past 40 years. Donya-e Eqtesad newspaper published a story to this effect and quoted Faezeh Hashemi Rafsanjani, the daughter of the late president Hashemi Rafsanjani and a leading reformist, as saying, “We should not act passively and instead enter into negotiations with the US soon before the situation gets worse. We have no other choice . . . Belated negotiations could happen under more pressure.”

Still, there is no sign of any major turnaround in conservative circles over negotiations with Washington. Kayhan newspaper, considered the mouthpiece of Supreme Leader Ayatollah Ali Khamenei, wrote that the “execution and confiscation of property of economic terrorists” is the immediate solution for dealing with the crisis rather than making more concessions to the United States. The editorial quoted Khamenei who has vowed neither to compromise with the United States nor to abandon Iran’s controversial policies of regional military intervention and opposition to Israel.

Hardline conservatives who favor economic resistance believe that opening Iran to the outside, especially the United States, would undermine their hold on power. This perception was clearly outlined in remarks by Gen. Mohammad Ali Jafari, commander of the powerful Islamic Revolutionary Guard Corps. He said that negotiations with the United States “if not treason [is] preparation for concessions with the US which would equal death of the Islamic revolution.”

However, the currency crisis could force the hardliners to change their position and seek a new accommodation with Washington. That’s assuming that the Trump administration wants to have those conversations and is not seeking to destabilize the Islamic Republic as part of its containment strategy.

Farhad Rezaei is an Iran analyst and the author of “Iran’s Foreign Policy After the Nuclear Agreement: Politics of Normalizers and Traditionalists,” Palgrave MacMillan. He tweets at @Farhadrezaeii​