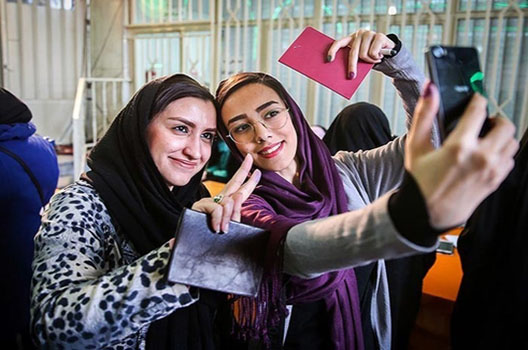 When I moved to Tehran twenty years ago, I wore a black manteau that stretched to my ankles and a headscarf pulled down to my forehead. By the time I graduated high school in 2005, my highlighted fuchsia hair stuck out like tentacles from a white shawl, and a matching manteau barely covered my rear.

Such social changes, as minor as some might seem, were and continue to be a barometer of change in Iran.

These transformations became notable under the presidency of Mohammad Khatami. Though Khatami was weakened and spent his second term as a lame duck—blamed for unfulfilled promises of reform and not defending protesters during the 1999 student uprisings—subtle changes to Iranian society began to take root, especially among the youth.

Khatami’s presidency came at an interesting crossroads in Iranian history. By 1997, many Iranians had woken up to the realities of an Islamic Republic that was no longer fighting for its survival in a bloody eight-year war with Iraq, or in the business of executing dissidents en masse. The children of the 1979 revolution—those born during and after 1979—slowly came of age and stories emerged of “degenerate behavior:” youth playing loud music in cars, drug use and addiction, underground music, drag racing, parties with alcohol, and unmarried couples holding hands and going on dates, among other things.

These behaviors ran contrary to Ayatollah Ruhollah Khomeini’s concept of the ideal Islamist youth, contradicted the austere rules of the Velayat-e Faqih or ruling jurist, and sent shockwaves through Iran and its government by the late 1990s.

Arguably these behaviors were a direct reaction to the oppression of the Islamic Republic, but according to scholar Asef Bayat, “The defiant behavior of Iranian youths was similar to that of post-World War I behaviors in America and Europe or post-Franco Spain. A rebellious, deliberately anti-moralist and hedonistic backlash seem to be common features of most post-crisis societies.”

Young Iranians were essentially acting like youth elsewhere, but whereas their parents sought social justice, this generation wanted more individual freedom. These post-Islamist youth, explained Bayat, “became pragmatic and nonideological with a clear aversion to violence, a distrust of officials, and a dream of living in the West.”

Not much has fundamentally changed in the past twenty years, even as the children of the revolution have had their own children. With over half of Iran’s 82 million people under the age of thirty, young people are the de facto opposition. What separates this new generation of Iranians from the previous one is their frame of reference: having been born in the 1990s and early 2000s, they have no recollection of the revolution or the Iran-Iraq War. This can be dangerous for the Iranian government since today’s youth may be willing to sacrifice more to bring about change or continue the tradition of leaving Iran for better economic opportunities and personal freedom. This generation is departing from tradition—and going against Islamic law—by not getting married and choosing to cohabitate, better known as ezdevajeh sefid or “white marriage”.

What also sets this new generation apart is how their lives have been shaped by information technology: satellite dishes, cell phones, and the internet.

Satellite dishes, which were few and far between in 1991, are now a staple in Iranian’s homes. During the 1990s, it was a novelty to have a dozen satellite channels. Now Iranians boast of having at least 700, of which over 180 are Persian language satellite channels or PLSCs. Iranian youth watch Western channels not just for news and entertainment, but also to learn English. (This was how a friend acquired an American accent without ever having traveled to the United States.)

Smart phones are no longer just for texting, calls and selfies. In Iran, they are weapons of documentation, turning anyone with a cell phone and access to social media or a messaging app into a citizen journalist. This was first noted during the 2009 post-election protests known as the Green Movement. But now, more than ever, Iranians rely on their smart phones to watch and document protests as they continue to ebb and flow since December 2017.

Despite an electric curtain on the internet, Iran has over 56 million internet users, the largest such cohort in the Middle East. Iranians long ago graduated from MSN and Yahoo! Messenger to Facebook, Instagram, Twitter and YouTube.

Though the government has tried to crack down on social media by blocking Facebook and Twitter—both of which are used by government officials—as well as other platforms, Iranians have perfected circumventing restrictions online. In recent weeks, there has been talk of blocking Instagram again, home to the Rich Kids of Tehran account, and dozens of Persian language Instagram accounts that repost videos of protests, Iranians dancing and lip-syncing, and even social commentary.

The concept of filmi, literally a “movie man” who would show up at people’s homes with a briefcase full of the latest bootleg VHSs or DVDs, is a thing of the past. Iranians can now download their favorite diaspora pop music for their cars, Persian translations of J.K. Rowling’s “Harry Potter” series, or Persian dubbed Game of Thrones episodes. Social change is no longer just measured by how much hair women show but how much you can download and share online.

Iran, as a nation, may be isolated from the world, but its youth aren’t—at least virtually. Forty years after the Islamic Republic, the old slogans about Western imperialism and vices ring hallow. This has happened in part because of outmoded policies and blatant hypocrisy—including the behavior of the aghazadehs, “children of the elite”—and also because the government is no match for the new information technology.

An anonymous Iranian dissident said it best: “At night, every light that is on in Tehran shows that somebody is sitting behind a computer, driving through information roads; and that is in fact a storehouse of gunpowder that, if ignited, will start a great firework in the capital of revolutionary Islam.”

This doesn’t mean that a new revolution that will overthrow the government is imminent. But in contrast to the old 1970s saying that “the revolution will not be televised,” the next one, if it happens, surely will.