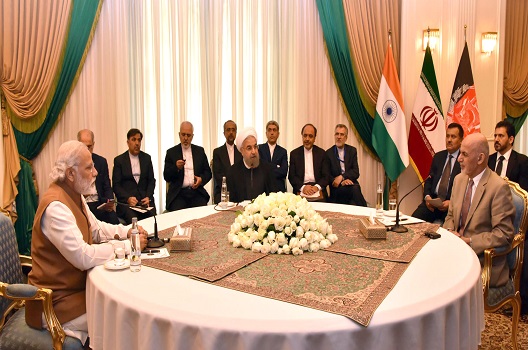 As the first set of US sanctions against Iran went back into effect Aug. 7, India is applying its negotiations skills—effectively, so far—toward managing relations with both sides.

The United States and its Persian Gulf Arab allies may be able to provide India with enough crude to offset any reduction in India’s oil imports from Iran. But will Delhi give in to the Trump administration’s pressure to cut Iranian oil imports completely by Nov. 4, thereby endangering a long-standing relationship with Tehran that goes beyond energy?

India wants a waiver from US sanctions so that it can continue to import a significant amount of Iranian oil. The Trump administration wants to reduce Iranian oil exports to zero, and that means threatening companies that do business with Iran with “secondary sanctions,” which include cutting them off from the US financial system.

Technically, Indian refineries can use US sweet crude instead of Iranian oil. Indeed, US oil exports to India increased to 15 million barrels by July 2018, almost double the 8 million barrels India imported in 2017. However, Indian companies that import Iranian oil—including Esser Oil, which buys 40 percent of its crude from Iran—are now facing uncertainty. Will the US provide India with the same incentives that Iran does, such as free shipping, insurance, and an extended credit period? Will the US allow India to pay in rupees, as Iran does?

India has taken advantage of Iran’s offer and, despite differences over the development of Iran’s Farzad B gas field, plans to increase its Iranian oil imports this fiscal year to 7 million tons compared to the previous fiscal year’s 4 million tons.

Incidentally, India may be able to receive cheaper US crude if China imposes tariffs on energy imports from the US. China is currently the United States’ second-largest energy importer after Canada. But with the addition of tariffs, it would no longer make much economic sense for Chinese refineries to buy US oil. That could lower the price of US crude and India could take advantage.

India’s oil and natural gas corporation Videsh Ltd (OVL) discovered Iran’s Farzad B gas field in 2008 in the Persian Gulf during the peak of international sanctions. Its Chabahar port project, which went through many ups and downs and was delayed numerous times because of sanctions, was finally gearing up after the Iran nuclear deal was reached in 2015. Both these projects may now be delayed because of the resumption of US sanctions.

India has masterfully managed to keep friendly relationships with countries that are rivals, including Saudi Arabia, Qatar, Iran, and Israel. Iranians continued to respect their business partner even though they did not forget that India sided with the US on every critical vote against Iran at the International Atomic Energy Agency and the UN Security Council.  India will try to balance its relationship with Iran and the US. Much will depend on how stringently Washington leans on Delhi to cut back on Iranian oil imports.

India may be willing to replace Iranian oil with Saudi and/or US oil, even though it does not support the Trump administration’s decision to reimpose sanctions against Iran. However, Iran is important to India in terms of regional politics in a way that the US cannot match, as Delhi seeks to counter growing Chinese influence across Asia. India is caught in the middle—if it favors Iran, Indian companies risk harsh US penalties, but if it bows to the US, India risks losing Iran to China.

The joint Iranian-Indian $500 million project to develop Iran’s Chabahar port on the Gulf of Oman has the potential to become a multi-billion dollar project with the construction of necessary road and rail infrastructure. But it has been delayed numerous times due to sanctions and lack of investors. There is fear in Iran that Chabahar could meet the same fate as the so-called “Peace Pipeline” that would have linked Pakistan and India to Iranian natural gas but has been largely dormant for the past three years.

Indian intentions to complete the Chabahar project were front and center during Modi’s visit to Iran in 2016. However, the project is drowned in uncertainty in large part because of Indian concerns over angering the United States. If completed, Chabahar would provide India a gateway through Afghanistan and direct and secure access to Central Asia. India’s current connection to Central Asia runs through Pakistan, which has been subject to the contentious India-Pakistan relationship.

India needs to expand its trade to Central Asia and it in particular needs Central Asian gas, oil and uranium. It needs Iran’s ports to complete a proposed 7,200-km International North-South Transport Corridor (INSTC), which would link India to the Persian Gulf, Central Asia, Russia, and some parts of Europe. The INSTC could increase India’s $1 billion trade with Central Asia to $170 billion.

If India backs off Chabahar, Iran has signaled that it could offer the project to China. This would strengthen Iranian-Chinese relations and cement China’s presence in South Asia.

Unlike India, China has direct connectivity to Central Asia through its western borders. Beijing already has broad trade and investment in the region, boosted by its massive Belt and Road Initiative, which ultimately could involve 60 countries.

China’s trade with Central Asian nations was $30 billion in 2016, well above India’s $1 billion. A planned 3,200-kilometer railroad will connect China’s Xinjang region to Tehran and, along the way, to Kyrgyzstan, Kazakhstan, Uzbekistan, and Turkmenistan.

China already has a foothold in Chabahar —China’s ZPMC firm won a construction contract related to the project. China is also involved in developing Pakistan’s Gwadar port. Although Chabahar and Gwadar are only 100 miles apart, China’s investments are not redundant. The Gwadar initiative involves $50 billion in infrastructure investments on a strategic military project that would secure China’s naval expansion into the Indian Ocean. Chabahar, if assigned to China, would also expand China’s presence in South Asia, but on a commercial level. Chabahar would be worth the investment for China if only to take away an important location from India, which it sees as a strategic competitor.

In 2017, the first shipment of Indian wheat arrived in Afghanistan from the Chabahar port, and in 2018 an Indian ship that left India’s Kandla Port for Afghanistan entered Chabahar transit port. This is significant since it has reduced Afghanistan’s dependence on Pakistani ports, which are subject to delays and impacted by poor relations between the two countries. If India were to be dropped from the Chabahar project it would negatively impact Afghanistan.

India and Iran have historically been friendly even during the Cold War. While India can find other energy providers, none of its other Middle Eastern allies can replace the geo-strategic advantage that Iran offers.

Fatemeh Aman, a nonresident senior fellow at the Atlantic Council’s South Asia Center, has written on Iranian, Afghan and other Middle Eastern affairs for over twenty years. She has worked as a journalist and analyst, and her writings have appeared in numerous publications, including Jane’s Islamic Affairs Analyst and Jane’s Intelligence Review.