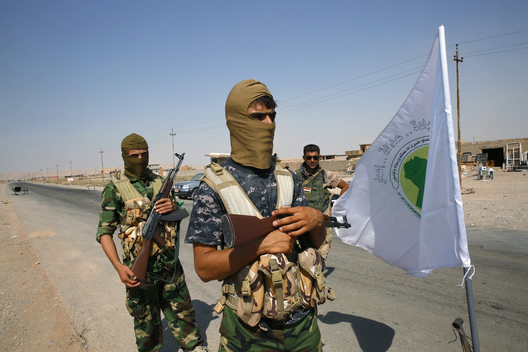 The burly, graying men in the mismatched camouflage arrived in the late winter of 2003, setting up camp within the green hilly folds of northern Iraq. They were members of the Badr Brigade, a Shia fighting force that had been sheltering in exile inside Iran during the reign of Iraqi dictator Saddam Hussein. They told visitors that they were Iraqi patriots returning to their country to help take on Saddam at the invitation of the Iraqi Kurds.

But the stickers on the Badr militamen’s outdated equipment immediately gave their origins away: “Property of the Islamic Revolutionary Guard Corps,” the major branch of the Iranian armed forces. Their history as a veritable Iraqi unit of the IRGC during the war between the two countries was known to all Iraqis.
Named after a key seventh century battle during the time of the Prophet Mohammed—and formed at the same period and under the same model of military discipline as Lebanese Hezbollah—the rise, growth and eventual political flowering of the Badr Brigade and its leader, Hadi al-Amiri, is one of the most consequential outcomes of the 1980 – 1988 Iran-Iraq War. After the launch of Hezbollah, the Badr organization is arguably the Islamic Republic’s second most successful foreign policy intervention to date.

For the first few years of its decades-long existence, Badr was largely seen as a failure. It was formed in late 1982, assembled from defecting officers of Iraq’s army and other Shia men, including POWs pressed into joining. It eventually became the military branch of the Supreme Council for the Islamic Revolution in Iraq, the Shia opposition political party led by the Hakim clan of clerics. The Badr Brigade fought Saddam alongside Iranian troops during the gruelling eight-year conflict. But by many accounts, it was an ineffective ally, led by men trained in conventional battlefield tactics and heavy weaponry instead of clandestine, guerilla war.

“The Badr Brigade was basically set up as a sort of a group of Iraqi exiles,” said Ali Ansari, an Iran scholar at the University of St Andrews. “They would eventually be used when the regime fell, which is what happened.”

After the inconclusive end of the war in 1988, Badr returned to Iran and settled into exile. Its men took part in the 1991 uprising against Saddam in the south, during the US-led war to push Iraqi troops out of Kuwait, only to be easily crushed by the Iraqi dictator’s armed forces.

The 2003 US invasion and occupation of Iraq drastically changed the Badr Organization’s fortunes. Within weeks of returning to Iraqi soil after a years-long absence, Badr set up offices in central Baghdad, taking over a quaint but dilapidated villa in the city center. It was a defining period in Iraq, when political space was up for grabs as various neighborhoods and towns in the chaos that followed the 2003 invasion.

Badr, led by Amiri, remained bound to the Supreme Council, but sought to reinvent itself as a charitable group. Charming and collegial, the Persian-speaking Amiri served as an intermediary between the US occupiers and Tehran. Visiting American officials—including neoconservatives such as John Hannah, Vice President Dick Cheney’s National Security Adviser—sounded him out on security matters.

A slow parting of ways between Amiri and the Hakim clan began after the shocking 2003 assassination of Ayatollah Mohammed Baqir al-Hakim, and continued to erode after the death of his brother Abdel-Aziz Hakim in 2009, when the young Ammar Hakim took over the the Supreme Council.

Amiri reinvented himself as a political power in its own right, building alliances with other ethnic and sectarian groups. Even as the Hakim clan’s influence waxed and waned, Badr managed to maintain hard political power. Badr veterans and allies headed up crucial Iraq instruments of state—including the interior and transport ministries.

Aging Badr fighters and new recruits burrowed deep into the security apparatuses, and were accused of horrific crimes in the sectarian bloodshed that engulfed Iraq a decade ago. One leaked US diplomatic cable cited sources accusing Amiri of personally ordering attacks on Sunnis. “One of his preferred methods of killing allegedly involved using a power drill to pierce the skulls of his adversaries,” said the leaked cable.

Iraq was in chaos, with Shia militias, Sunni insurgents, and American soldiers killing each other in the streets of cities and the farmlands along the country’s river valleys. But the top-down discipline that made Badr an ineffective force against Saddam, made it a powerful network to take power within the new Iraqi state.

“Badr was formed as a cohesive unit, whereas other militias like the Mahdi Army were a bunch of teenagers and people in their twenties trying to put something together really quickly,” said Zaid Ali, author of The Struggle for Iraq’s Future.

Amiri served as minister of transportation from 2010 to 2014. But it was the three-year war against the Islamic State of Iraq and al-Sham (ISIS) that begin in 2014 which elevated Amiri’s national stature and gave yet another opportunity for Badr to reinvent itself. It’s close ties to Tehran made it a crucial conduit for rebuilding armed forces to take on ISIS.

By early 2015, Hezbollah field commanders were seen on the ground, training Badr militiamen at a base in Diyala province Amiri had seized from the Mujahedin-e Khalq, the Iranian dissident group once hosted by Saddam. The Badr Brigade fought side-by-side with the Iraqi army and national police forces battling ISIS until it lost all its territory inside the country late last year.

This year, Amiri sought to turn his battlefield successes into even more political power, reinventing himself again this year as a power unto himself as head of a multi-confessional political coalition which beat out Prime Minister Haidar al-Abadi’s coalition and placed second only to the list formed by Shia cleric Muqtada al-Sadr in last May’s general elections.

A new government has yet to be formed, but with a large bloc in parliament, Amiri is sure to remain a force to be reckoned with. Amiri maintains excellent ties with Iran, but he also continues to meet with US officials who view Badr as a relatively moderate unit in Iraq’s constellation of rogues. Even Iraqi Sunnis in places like Anbar province grudgingly admit that Badr played a valuable role in ridding their towns and cities of the Islamic State and helping restore civilian life.

“There are lots of cases that I’ve heard that they have played a positive role,” said Ali. “You could say they’re just interested in good press. But the people who received the assistance were pretty grateful.”

Like Hezbollah and its leader Hassan Nasrallah, the Badr Brigade and Amiri have become Iranian startups that successfully embedded themselves within the Iraqi state and into political life—so successfully that they no longer need Tehran’s guidance or direction.

Borzou Daragahi is a journalist who has covered the Middle East and North Africa for more than sixteen years. He is also a nonresident fellow with the Atlantic Council’s Middle East Security Initiative.Follow him on Twitter: @borzou.

Image: Fighters from the Shia Badr Brigade militia stand near their flag as they guard at a checkpoint along a highway recently taken from militants of the Islamic State, outside the town of Sulaiman Pek during September 5, 2014. (REUTERS/Ahmed Jadallah)