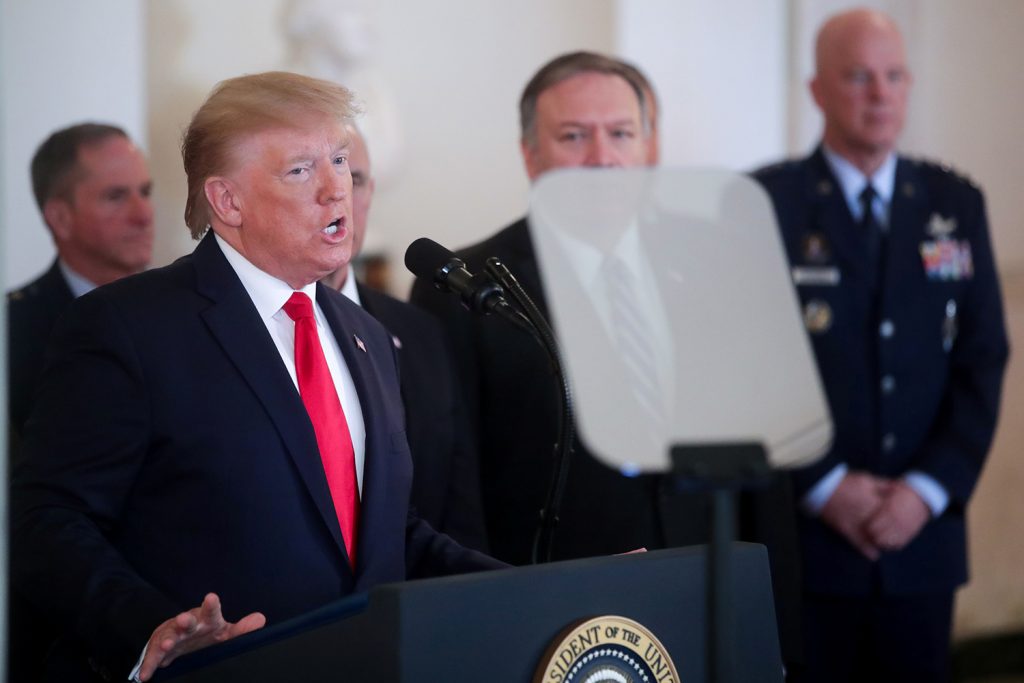 A retaliation from Iran was not a surprise—not only was it earlier announced by the Islamic Republic but it was also reasonable from a geopolitical point of view. Tehran had to somehow respond to the death of General Soleimani. What we didn’t know was when, how, and where Iran would retaliate. According to available press information, Iran launched at least fifteen short-range ballistic missiles against two military bases in Iraq. Through this operation, Tehran showed that when it comes to its security, it is willing to militarily respond to even its most powerful enemies, such as the United States. This attack was a strong message not only to the White House but also to US public opinion—with Donald Trump as your president, tensions will remain high and at some point an open war might break out. It was also a message to Iran’s allies in the region—the “axis of resistance” remains strong and Tehran is not afraid of fighting and protecting them. Obviously it was also a message to the Iranian public who now might feel that the death of General Soleimani was successfully revenged.

This crisis can be compared to a high-stakes poker game, in which all participants bluff and play a rough game of nerves until someone gives up. Although the rules in a poker game and in the current tensions between the United States and the Islamic Republic are similar, there is one vital difference—in poker nobody dies; but in war, casualties are real and the consequences can be devastating.

Iran had to somehow respond to Soleimani’s death but at the same it clearly showed—contrary to many experts labelling Iran’s decision-makers as “mad mullahs”—that it can restrain itself. From all the available options the Islamic Republic decided to attack an Iraqi military base with US and foreign personnel, but at the same time the Iranians avoided causing any casualties. Tehran therefore achieved two vital goals: it showed its willingness and military capabilities, but at the same time did not caused any real harm to US soldiers which would most likely trigger an armed reaction from the White House. Who knows, maybe the Iranians even deliberately revealed the position of their launchers before the attack in order to give the United States time to take precautions. It might sound ridiculous, but if we assume that Tehran wanted to avoid US casualties—and at least for now that has been Iran’s policy— then it seems a plausible explanation. According to some credible sources, the Iraqis were warned by the Iranians about an imminent attack.

Combining a clear demonstration of power without any real damages was rational. Without a doubt Iran has capabilities to strike painfully—if there are no US casualties, it most likely means that Tehran intended it that way. If the Islamic Republic wanted to harm the US forces, they would have attacked the US troops in Bahrain or the US Embassy in Baghdad.

It seems that we are still witnessing a theatre play, in which actors are demonstrating their courage and capabilities, an unwavering willingness to face their enemies. If they are rational—and usually high-ranking decision makers are—they must be aware that a manageable crisis is one thing and an open war is something much different. A full-scale confrontation would not be beneficial to anyone. The Islamic Republic wants to act without triggering a war, since most likely it would be the end of the regime. It cannot sustain a long-term open war with the United States. At the same time Donald Trump must be fully aware that his “Twitter wars” cannot be compared to the negative effects of an open war with the Islamic Republic, which on top of the material and human costs, would bury his chances for re-election. Unfortunately, this hypothesis is based on assumption that both in Tehran and Washington decision makers are fully rational and aware of the potential consequences. We need to hope that they are, and their real intentions and plans are different from their statements and tactical moves.

Although the current situation is very serious, there is a glimmer of hope that now we will witness a modest de-escalation. Both sides demonstrated their military might and the courage to use it when their interests are threatened. Both sides undoubtedly proved their points. Iran saved its reputation, while the United States has still several options—other than war—to pursue. Now both sides must show even bigger courage—the courage to take one step back before it is too late. The stakes of this “poker game” cannot be increased indefinitely. A de-escalation would be the best scenario for everybody—not only the Iranians and the Americans, but also for all people in the Middle East, particularly in Iraq, which has become the arena for conflict between Washington and Tehran. In this conflict we tend to forget about ordinary Iraqis who suffer the most and nobody seems to care about their interests and well-being.

After Soleimani’s death Tehran had to react somehow. Now, after the night missile raid, Trump’s reaction has been relatively balanced and less hawkish than many had expected. The fact that no US soldiers were killed or even injured and that it was an Iraqi military base, not American, helped cool the response. Trump harshly and unsurprisingly criticized the Islamic Republic, accusing it of malicious policy, and announced new sanctions “until Iran changes it’s behavior.”

But despite these criticisms, we can feel relief.  The White House decided not to militarily respond and backed down—at least for now. However, it does not mean that a risk of escalation has been neutralized. The United States still has two major options. If it retaliates at any point, then the Islamic Republic would respond again and in a way that the United States would have to respond. This would trigger a vicious cycle and very soon we would cross a point of no return. The best option for both governments would be not to further increase pressure but to give a diplomacy a chance. Even if it is slow and frustrating, this would be still a better option than a war. In other words, after Trump’s press conference, there are some good reasons to be optimistic and believe that both sides will remain restrained. However, on the other hand, in the Middle East restraint is very often seen not as a virtue, but as a sign of weakness which has to be exploited by one’s enemies.

Even if this crisis does not suddenly escalate into a major conflict, we will be still very far from peace. Iran does not hide that its ultimate goal is to remove all US troops from the Middle East and now it has a great opportunity to achieve that at least in Iraq. Most likely it will use its proxy militias to increase a pressure on US troops and force the US administration to pull out at some point.