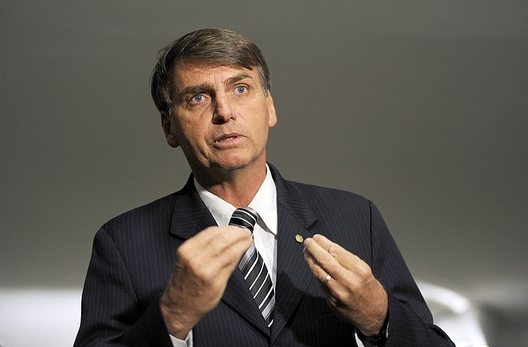 The trade and economic partnership between Iran and Brazil has expanded in recent years and was slated to grow even further after the completion of the Iran nuclear dealin 2015. But questions are being raised about this relationship after the victory of President-elect Jair Bolsonaro.

Brazil is Iran’s seventh-largest trade partner and by far its most important economic interlocutor in South America. On November 15, a Brazilian vessel arrived at Chabahar, Iran’s only ocean port, carrying 72,000 tons of bulk corn from Brazil.  A year ago, a Brazilian ship, the Living, carried 66,000 tons of sugar into Chabahar.

According to Behrouz Aghaie, director of the Sistan-Baluchestan Ports and Maritime Organization, the latest shipment was the largest to dock at this strategic southern Iranian port.The port, which was developed by India, has been exempted from USsanctions, primarily because of its importance to Afghanistan as an outlet for trade.

On November 10, Fernando Collor de Mello, a senator and Brazil’s former president, told Iranian Parliament Speaker Ali Larijani in Tehran that Brazil and the other BRICS states—Russia, India, China and South Africa—would stand with Iran in the face of US sanctions. Currently the head of the Committee of Foreign Affairs and National Defense at Brazil’s Federal Senate, de Mello referred to US sanctions against other Latin American countries such as Cuba and Venezuela and stated that such measures would never resolve problems.

TheBrazilian ambassador to Iran, Rodrigo de Azeredo Santos, announced in September 2018 that his country plans to allocate a $1.2 billion loan to Brazilian companies doing business with Iran. This is even more generous than a European Union plan to boost European commerce with Iran through an €18 million aid package. But the fate of the Brazilian credit line, which was to be opened by the Brazilian Development Bank, is not assured under the incoming Bolsonaro administration.

The Iranian government congratulated Bolsonaro on his victory in October, expressing hope that relations between Tehran and Brasilia “will continue to expand and flourish in all economic and political fields.” But how could Bolsonaro’s administration change the course of this relationship?

Brazil exported more than $2 billion worth of products to Iran in 2017. That put Brazil after only China, India and Russia as a top trading partner in the last Iranian fiscal year.

In the second half of 2018, Iran began negotiating with a number of countries, including Brazil, over the importation of raw materials for pharmaceuticals. In addition, there were talks about possible Brazilian investment in Iran’s oil industry.

During the 2011 – 2014 term of former President Dilma Rousseff, the Iran-Brazil economic partnership waned due to international sanctions imposed on Iran. Internal changes in Brazil and human rights abuses in Iran were also cited as reasons for the decline. The relationship changed dramatically, however, after the Iranian nuclear deal in 2015, and trade reached $2.2 billion in 2016.

Politically, Brazil has attempted to play a constructive role in Iran’s nuclear dispute by negotiating the “Tehran Nuclear Declaration” in 2010 that sought to address concerns about Iran’s nuclear program by sending out much of Iran’s stockpile of low-enriched uranium to Turkey in return for fuel for a reactor that produces medical isotopes. The 2010 proposal, however, was rejected by the Obama administration, which had initially encouraged the Turkish-Brazilian effort but regarded the result as too little, too late.

With the election of Bolsonaro, it seems likely that Brazil will revert to a position of hostility toward Iran. The new Brazilian president is a “likeminded” leader with the Trump administration, White House national security advisor John Bolton said recently. Bolsanaro’s choice forforeign minister, Ernesto Araújo, described Iran’s regime as “horrible Islamic fundamentalism that has come to contaminate the Middle East.”

Eduardo Bolsonaro, the president-elect’s son, stated before the election that his father’s win would mean an end to friendly Iranian-Brazilian ties.

The new administration is not only alienating Tehran. By announcing plans to move Brazil’s embassy in Israel to Jerusalem from Tel Aviv, Bolsonaro could also anger many of Brazil’s traditional Arab friends and undermine multibillion-dollar sales of poultry and halal meat to Muslim countries. Brazil’s exports to the Middle East alone amount to $16 billion annually of which only 3 percent goes to Israel. The embassy move, which probably was intended to win the support of the growing Evangelical population in Brazil, may not actually take place as the new administration cannot afford losing the backing of Brazil’s agricultural sector. Such a shift would also anger Brazil’s Muslim community, the largest Muslim population in Latin America.

So far, Brazil’s largest trading partner, Egypt, has expressed dismay at the move. A planned visit by a large Brazilian delegation to Egypt, which included a meeting with Egyptian president Abdel Fattah al-Sisi, was cancelled last month, probably in response to the announced embassy transfer.

Bolsonaro’s victory was partly due to the support he received from the business community, but it is not completely clear how he can retain this backing. According to World Bank data, Brazil could fall into crisis again if it doesn’t cut its budget deficit. No wonder Brazil’s economy has been the center of attention of many governments over the last three decades.

Bolton said at a November 27 press briefing that he thinks Bolsonaro and Trump have developed a personal relationship“even if remotely.” This may not be sufficient to resolve the issue of the tariffs that the Trump administration recently levied on Brazilian aluminum and steel.

Populist leaders sometimes change their positions once in power. If improving the Brazilian economy requires staying the course with Iran, Bolsanaro may also alter his views—especially if Brazil can take advantage of Iran’s current difficult situation.

One possible scenario is that the new Brazilian administration would limit political relations with Iran but continue its current level of trade.

Rubens Ricupero, a former finance and environment minister, claimed recently that Bolsonaro could backtrack on his most radical foreign policy positions. “If Bolsonaro does what he says,” Ricupero noted, “Brazil will quickly become a pariah in the global community.”

Brazil’s incoming deputy president, General Hamilton Mourao, stated recently that “Sometimes [Bolsonaro] has rhetoric that does not go along with reality.”Mourao added, “Brazilian foreign policy has traditionally been pragmatic.We have to keep it in balance.”

In response to concerns over the planned embassy move and possible backlash, Bolsonaro said he would keep Brazil’s relations with the Middle East in good shape. It is not clear, however, whether he considers Iran to be part of the Middle East.

Sam Aman, a communications consultant at Media Theory specializing in Latin America, contributed to this piece.