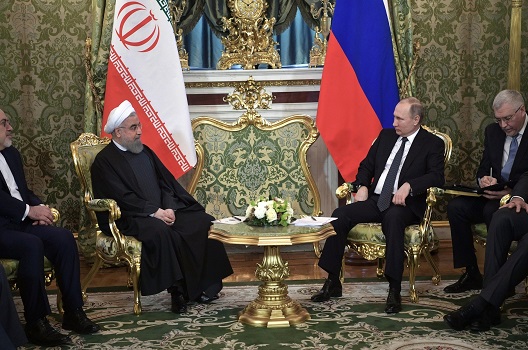 As the Syrian government increasingly consolidates control over its territory after seven years of civil strife, cracks are widening between its key external supporters, Iran and Russia.

The issue of Syria’s future has generated a heated debate among political elites in Tehran and in Farsi media over Iran’s continued military presence and how it can leverage its expenditure of blood and treasure to preserve its strategic and economic interests.

Sazandegi newspaper, a reformist outlet, has raised concerns that Syrian dictator Bashar al-Assad is double-crossing Iran and giving Israel, through Russia, a green light to diminish Iran’s military presence in Syria, especially near the Israeli border.

According to Israeli sources, Russian President Vladimir Putin decided to call for the withdrawal of Iranian forces, including proxy Shia militias, after a meeting May 9 in the Kremlin with Israeli Prime Minister Benjamin Netanyahu. Russia announced at the time that it would not provide a promised S-300 advanced defense missile system to Syria. The system could limit Israel’s ability to continue to attack Iranian targets in Syria with relative impunity.

Other media have speculated that a supposed secret agreement between Russia and Israel also entails billions of dollars of reconstruction aid to Damascus from Saudi Arabia and Iran’s other foes across the Persian Gulf.

Sharq, a newspaper close to the government of President Hassan Rouhani, has sharply criticized what it called Russia’s “deception” and written that Moscow is determined to resolve the Syria crisis by siding with the West and Israel at Iran’s expense. Iran Diplomacy, another moderate outlet, predicted that Moscow would lean toward the West at upcoming negotiations in Geneva over a new Syrian constitution. According to an editorial in the publication, Russia is preparing to push Iran to leave Syria in exchange for the withdrawal of US and Turkish troops.

Other outlets have been more measured. IRNA, the government’s official news agency, wrote that “realistically speaking, Moscow has always been making decisions based on Russia’s own national interest, and it is unreasonable to think that Moscow should always stand with Tehran on all matters [just] because of close political and security ties between the two countries.”

According to IRNA, Iran should recognize that interests between Tehran and Moscow have diverged as the Syria conflict transitions from a military to a diplomatic phase. While it did not spell it out, the article appeared to suggest that the Iran-Russia partnership in Syria did not extend to confrontation with Israel.

The debate in Tehran is playing out in the context of the US withdrawal from the nuclear deal and a long-standing tension between political camps that favor stronger ties with Russia and China and those that still hold out hopes for better relations with the West. Those close to the Rouhani government have always contended that Iran should not lean too much on Russia but try to maintain a balance. Iran Diplomacy argued that the nature of Russian foreign policy in the Middle East is to not make a strategic alliance with any one country but to seek “financial benefits” from bilateral relations. “Therefore,” the article said, “a country which pays more, will receive Moscow’s deeper and warmer relations.”

Seen from a different perspective, the moderate Entekhab.ir wrote that Russia’s new strategy is actually a victory for Iran because it will bring back the monopoly of the Syrian army over the southern border. According to the editorial, this is a bitter option for Israel because “it presents Israel with two choices: to accept the Syrian army’s control over southern borders or to face Iran and Hezbollah. In any case, it’s a victory for Iran.” Similarly, a statement issued by Ali Shamkhani, secretary of the Supreme National Security Council, that Iran maintains no military presence in southern Syria, was interpreted as implicit recognition that Iran has already withdrawn from the area. However, there are also reports that pro-Iranian forces have simply put on Syrian uniforms.

In hardline circles, there is a difference of opinion over Russia’s latest moves. 19-Day, a newspaper close to the hardliners of the conservative Haqqani school, wrote that “the obvious contradictions on the part of Russians show that their diplomacy, as always, is blackmailing Iran.”

However, Supreme Leader Ayatollah Ali Khamenei’s foreign policy representative, former Foreign Minister Ali Akbar Velayati, noted that Russia is Iran’s only trusted regional ally. According to Velayati, “Russia can neither force nor intend to force Iran. We are cooperating with this country on defensive issues, and Russians have given us more or less everything we wanted so far.”

Iran, which has had strong ties with Syria since the Iran-Iraq war of the 1980s, seeks to keep Syria as a large new base for a so-called “resistance axis” against Israel and the United States. It also seeks reconstruction contracts for its military industries. How large a military presence Iran requires, however, remains to be seen.

It is unlikely that Iran will entirely leave Syria, given its heavy investment in the Assad regime. In Iran’s security doctrine, Syria serves as strategic depth to deter attacks from Israel or a Saudi-led Sunni Muslim alliance.

Yet, it is highly possible that Iran can reach an agreement with Russia (and indirectly with Israel) to stay far from Israel’s borders and to refrain from building large military bases or rocket factories in Syria. If such an agreement is not reached, Iran would be left with the option of escalating the Syria war in such a way that both Assad and Russia would deem it necessary to maintain Iran’s military presence in Syria. Iran could do this by boosting an existing or new Sunni terror group, something Iran has done in the past by allowing Sunnis to attack Americans in Iraq and Afghanistan and Salafi Kurds to attack ethnic separatists in Iran. As a matter of fact, one conservative Iranian strategist advised the government to move in that direction in case Russia and Syria insist on kicking out Iran.


Farhad Rezaei is an Iran analyst and the author of Iran’s Foreign Policy After the Nuclear Agreement: Politics of Normalizers and Traditionalists, Palgrave MacMillan. He tweets at @Farhadrezaeii