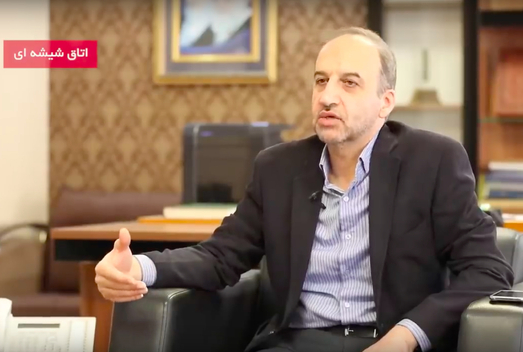 While growing US-led pressure on Iran is helping unify the Iranian polity around the flag of nationalism, it is also exposing fault lines among the ruling elite as they search for the key causes of the Islamic Republic’s failures forty years after its birth.

In a rare hour-long interview on May 1, the former head of Iran’s state broadcaster Mohammad Sarafraz spoke publicly about his time at the Islamic Republic of Iran Broadcasting (IRIB). He was appointed director general of IRIB by Supreme Leader Ayatollah Ali Khamenei in 2014, after serving as the head of its 24-hour English-language network PressTV for several years, until he was prematurely replaced in 2016. Sarafraz’s short-lived tenure at IRIB contrasts sharply with that of his predecessor who directed the state broadcaster for a decade.

What makes the interview significant is the deviation of a hardline insider from the conventional trend of conformity that establishment figures usually follow once they retire or fall out of grace. It also contains insightful revelations, or more precisely allegations, that heavily implicate the Islamic Revolutionary Guards Corps (IRGC) and its intelligence arm in corruption schemes, coercive measures, and arbitrary imprisonment of citizens—all in the name of national security.

Notably, the interview was conducted by Abdolreza Davari, press advisor to former hardline President Mahmoud Ahmadinejad, who notoriously turned against powerful elements within the Revolutionary Guards during his second term in office (2009 – 2013) and at some point went as far as to label the group as “our smuggler brothers.” Today, two key members of Ahmadinejad’s inner circle are in prison on charges of corruption.

The program is part of a series called Glass Chamber—within which, figuratively speaking, nothing can be hidden from sight—and starts with Sarafraz offering a general picture of where the Islamic Republic stands today and how the general public views the government.

“My understanding is that the majority of people are unhappy with how the country is run and believe the authorities are either incompetent or corrupt, or simply indifferent.” Sarafraz then adds that under these circumstances, the United States is preparing to find an excuse for military action against Iran “after Ramadan,” which ends on June 4. Interestingly, a few days after the interview aired, on May 6, US National Security Advisor John Bolton issued a statement that Washington was deploying the USS Abraham Lincoln Carrier Strike Group and a bomber task force to the Middle East in response to “troubling and escalatory indications and warnings” from Iran.

Much of Sarafraz’s focus is on internal issues. He continues to elaborate how his crackdown on corruption and push for efficacy within IRIB—such as “removing 800 managerial posts”—elicited IRGC-led “sabotage” against Sarafraz and his close associates, including Shahrzad Mirgholikhan, an Iranian national who served a five-year jail sentence in the US on charges of smuggling military hardware to Iran, as well as 3,000 night vision goggles.

Soon Sarafraz made Mirgholikhan his “special inspector” in an effort to clamp down on corruption within the organization. As a consequence, Sarafraz suggests, IRGC intelligence agents tried to intimidate or eliminate her by various means such as “tweaking her car brake” and staging a deliberate car accident.

Mirgholikhan also participates in the interview by phone and recalls a meeting with the Supreme Leader’s son, who has close ties with the IRGC intelligence apparatus. She reportedly asked for his support out of fear of being taken out “by bullet.”

Reza Golpour is another name that comes up in the interview, providing clues to the security failures of the Revolutionary Guards in recent years. This includes a suspicious explosion at a missile base near Tehran during 2011, which killed a key architect of Iran’s ballistic missile program, and Israeli Mossad’s scandalous theft of nuclear archives in 2018.

Golpour authored a controversial book in 2002, titled, Eavesdropping on Phantoms, which takes a critical look at the performance of the intelligence ministry under former reformist President Mohammad Khatami. Sarafraz suggests that the author had been tasked by the IRGC intelligence apparatus with a “sabotage mission” and his book was written “on [their] orders.” Notably, according to state media reports, Golpour was later arrested on charges of espionage for Israel and still remains behind bars.

Lastly, Sarafraz takes aim at the IRGC attempts to marginalize critics and dissidents through what this author has dubbed “manufacturing spies,” a systematic effort to cover up intelligence leakages and justify security failures by scapegoating innocent citizens such as prominent academics and civil society activists. Sarafraz cites the Revolutionary Guard’s detention and trial of several Iranian environmentalists as a prime instance of this securitization “project.”

Some of the current and former PressTV journalists this author interviewed describeSarafraz’s years at the helm of the channel as its “golden era,” partly because of the “new thinking” he tried to bring in and the “lavish salaries” it paid at some point. Yet, it was during that very era that PressTV aired forced confessions of protesters from the rigged 2009 presidential elections and several journalists, including dual national Maziar Bahari. Not surprisingly, the European Union added Sarafraz to its blacklist of human rights violators in 2013 and adopted punitive measures against him that are in place to date.

It is not entirely clear why Sarafraz has broken away from a long track record of close collaboration with the IRGC, which eventually led to his promotion from the management of PressTV to the directorship of IRIB in its entirety. If anything, however, it does speak volumes about the fluidity and heterogeneity of Iranian politics beyond the conventional reformist-hardliner distinction.

Notably, though the revelations might land Sarafraz in hot water, they also suggest an intensifying struggle for power between key state institutions and an urgent need for structural changes within the Islamic Republic.

Maysam Behravesh is a senior political analyst at Persis Media and a PhD candidate in the Department of Political Science at Lund University, Sweden. Follow him on Twitter: @behmash.

Image: Former head of Iran’s state broadcaster in an interview on May 1 (Iranian state media)