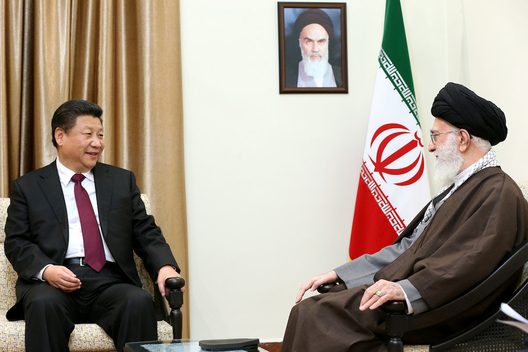 US President Donald Trump’s decision to abandon the Iran nuclear deal, and thus re-impose broad sanctions against the Islamic Republic, sends a clear signal that Washington has reverted to a full containment policy against Tehran. But, lacking a clear overarching Middle East strategy, US policymakers do not appear to be weighing the merits of this pursuit in the context of the United States’ long-term rivalries with China and Russia. While Tehran’s contentious relations with its neighbors to the west are the subject of intense focus, inadequate attention is being paid to the geostrategic implications of transformations to Iran’s east. A new “Great Game” for political and economic dominance is being waged in Eurasia that will impact the lives of almost two-thirds of the world’s population, and could lead to a further weakening of Western influence over the international system. China and India are currently in the lead, with Russia following closely in the hopes of shaping any outcome to its advantage. The Europeans lag behind, and Trump’s Iran containment strategy risks further holding them back.

China is in the driver’s seat of this geopolitical shift with its $1 trillion Belt and Road Initiative (BRI), which seeks to connect sixty-five countries from East Asia to Europe through a network of railways, roads, ports, natural gas pipelines, and telecommunications infrastructure. Dubbed as a New Silk Road, BRI is an umbrella for a wide array of bilateral and regional agreements aimed at furthering Beijing’s ultimate objective to become the world’s leading superpower by 2049. Critically, the network will allow China to bypass the Strait of Malacca, a vulnerable chokepoint through which the vast majority of its oil and other imports pass, which China fears the US Navy could exploit in the event of a conflict. China is expanding a set of pipelines that pump Central Asian and Caspian Sea gas to its underdeveloped western region, with the ultimate goal of connecting Persian Gulf gas to the network.

The Chinese also are likely to gain diplomatic leverage over countries along the BRI through the massive loan packages they are providing to fund associated infrastructure projects. And there is concern among security analysts that, in addition to drastically cutting down the time it takes to deliver goods across the continent, the modernized rail links eventually could serve as a means of deploying the Chinese military to Europe’s doorstep.

The BRI has an important soft power component as well. According to Sahra Joharchi, Senior Lecturer in International Relations at Trent Nottingham University, “China wants to be the standard bearer for developing states.” Its model of economic development coupled with authoritarian governance poses a challenge to Western norms. As the BRI expands, a narrative incorporating the various peoples into a new Silk Road community could pull more nations into China’s orbit.

Iranians may be one such nation. If Tehran becomes more economically and politically isolated, it will come to rely on Beijing to a greater extent. Iran needs $140 billion in foreign direct investment to bring its oil and gas production to full scale, and the government estimates that it needs $14.5 billion per year over the next decade to modernize its transport infrastructure, including railroads, roads, airports, and ports.

Due to years of previous sanctions and the slow return of European companies following implementation of the Joint Comprehensive Plan of Action (JCPOA), China already maintains an outsized presence in the Iranian economy. As of the beginning of 2018, the Export-Import Bank of China had provided $8.5 billion in loans for twenty-six projects in Iran, including highway construction, mining, and steel production. Meanwhile, China has provided a $1.6 billion loan to electrify the Mashhad-Tehran rail line, which will vastly increase the speed by which goods can be transported along that portion of the China-Central Asia-West Asia Corridor, the branch of the BRI that avoids Russia. A Chinese company also is providing $22 billion in financing for the construction of a high-speed railway from Tehran to Isfahan. The firm will be responsible for 40 percent of the project’s construction.

The BRI is not the only so-called Silk Road project, however. Concerned over China’s expansion, India is pursuing its own transnational network, referred to as the International North South Transport Corridor (INSTC). A main thrust of this project is a 7,000 km ship and rail route connecting Mumbai to Moscow. The INSTC also is intended to provide India with access to Central Asian energy and mineral resources, which currently must pass through rival Pakistan. As such, an INSTC branch will travel through Iran to Afghanistan and Turkmenistan, with an undersea Iran-Oman-India gas pipeline comprising another important component of the project.

India also has invested heavily in Iran, albeit to a lesser extent than China, due to past American pressure on India to distance itself from Iran and current investor concerns about the future of the nuclear deal. Despite these challenges, Indian investments in Iran increased following implementation of the JCPOA. New Delhi has committed $500 million to develop Iran’s Chabahar port, half of which it has already invested to bring the port’s first phase online. This year, Iran provided India with an eighteen-month lease to manage a portion of the port’s facilities. India also is planning a rail route from Chabahar to Afghanistan, though the return of US secondary sanctions will hinder India’s efforts to expand the INSTC.

Iran, the only country situated along both the China-to-Europe corridor and the axis connecting Central Asia and the Caspian to the Arabian Sea, is a linchpin in the Chinese and Indian initiatives. Holding the world’s second largest reserves of natural gas, the future orientation of Iran’s pipelines will help shape the overall configuration of Eurasia’s emerging energy architecture, thus impacting the balance of power between Europe, Russia, and China. If its gas industry is fully developed, Iran will have the production capacity to pump gas to two of the following three markets: India (through the Oman pipeline), China (through either Turkmenistan or Pakistan), or Europe (through the Southern Gas Corridor). The addition of Iranian gas to the last corridor would help the Europeans escape the monopoly Russia currently holds over their energy market. For this reason, Moscow’s objective is to direct Iranian energy exports away from Europe in order to maintain its leverage over the continent.

Undoubtedly, pulling out of the nuclear deal and re-imposing sanctions will slow down the development of Iran’s energy and transportation infrastructure. This would fit within Washington’s efforts to stem Tehran’s expansion in the Middle East, depriving Iran of much-needed energy and tax revenues, as well as employment opportunities for a restless population. But regardless of US pressure, Iran faces mass discontent due to drastic income inequality, corruption, government repression, and severe water shortages. These fundamental issues threaten the long-term survival of the Islamic Republic and cannot be resolved without drastic changes to the Iranian governing system.

Meanwhile, China likely will pursue a more muscular Middle East strategy. As the BRI progresses, China likely will become less susceptible to pressure from Arab governments wanting to distance it from Iran. Beijing “may be forced to throw its principles of non-interference overboard” with regards to the dispute between Iran and Saudi Arabia, says James Dorsey, a Senior Fellow at the S. Rajaratnam School of International Studies. If push came to shove, China likely would side with Iran due to its superior geostrategic position. And with the BRI a central component of Beijing’s long-term security strategy, China likely will be more willing to risk American ire than in the past. Chinese-backed business will be the least-impacted by US sanctions, with funding coming through non-Western institutions such as the Asian Infrastructure Investment Bank. On the other hand, India’s INSTC and the Southern Gas Corridor to Europe would not fare well in the face of US pressure, ceding advantages to China and Russia, respectively.

At a time of momentous transformations in Eurasia and the Asia-Pacific, the United States must develop an overarching Middle East strategy that complements a grand strategy designed to soften China’s global rise and lessen Russia’s ability to threaten Europe. Lacking such a strategy makes it impossible to weigh the impact that various efforts to push back against Iran’s troubling regional behavior could have on US global objectives. For instance, a policy aimed at fully containing the Islamic Republic could have the unintended consequence of directing Eurasian energy flows east, thus limiting Europe’s capacity to maneuver away from Russia. Hampering India’s efforts to expand the export of its goods to Europe and undermining its access to Central Asian energy resources could weaken its potential as a necessary counterbalance against China. As the new Great Game unfolds, disarray in Washington’s foreign policies risks a future in which the US finds itself running blind-folded, down its own separate track, all alone.

Ali G. Scotten is a Security Fellow with the Truman National Security Project and the founder of Scotten Consulting, a firm specializing in the geopolitics of the Middle East. Views expressed are his own. Follow him on Twitter: @ScottenConsult