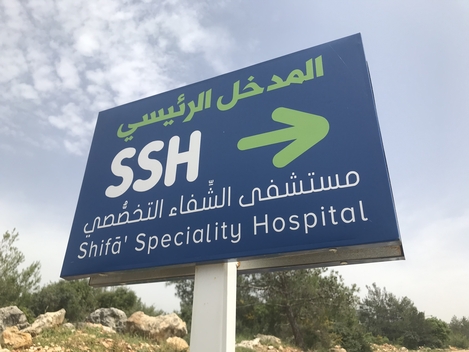 The new hospital opened officially on May 1 and is managed by Hezbollah’s Islamic Health Unit, a social service provider falling under the group’s Executive Council—one of five branches into which Hezbollah’s political, social and military activities are divided. There are few signs of the Iran-backed Lebanese group at the opening event: no yellow flags and no portraits of Secretary-General Hassan Nasrallah. Its upbeat anthem is absent. But journalists receive their press invitations via Hezbollah’s media relations office, and the white and red roses that adorn the building are typical of the party’s events. It’s Hezbollah—it’s just more subtle.

The 10,000-square-metre private SSH—complete with gym and landscaped gardens—provides rehabilitation services for up to 115 inpatients suffering from drug and alcohol addiction, and mental disorders such as schizophrenia. According to a Hezbollah media officer, it has been funded by donations to the Islamic Health Unit, at a rough cost of $10-15 million.

Its opening might seem unusual, at a time when Hezbollah and its main financier Iran have admitted to feeling the effects of the Trump administration’s “maximum pressure” campaign aiming to curb the Islamic Republic and its proxies. In March, Nasrallah encouraged Hezbollah supporters to participate in “jihad through money,” adding that “the resistance is in need of its popular support and embrace.”

The Trump administration estimates that Iran supplies the “Party of God” with $700 million annually, but US officials have been congratulating themselves on the effectiveness of the strategy to counter Tehran and its funding of groups like Lebanese Hezbollah.

Yet the SSH is a symbol of Hezbollah’s long-game approach, and the party’s ability to use service provision and business activities to ingratiate itself with the Lebanese population. The unit has been in the planning for seven years, according to Hassan Ammar, a Ministry of Health office director. That precedes the current US administration’s Iran policies. The hospital—and Hezbollah’s other service offerings—will probably outlast them, too.

Tehran and its proxy in Beirut may be under some financial strain as a result of US sanctions, but they are not broke—in part thanks to other financing sources including black market trade and cash donations. In the face of a weak Lebanese state, Hezbollah’s service provision allows it to maintain and strengthen its domestic appeal. That is particularly true when it targets underserved areas like mental health care.

Lebanon’s Ministry of Public Health only launched a dedicated national mental health program in 2015, and just 5 percent of the government’s health budget is allocated for psychological care. That leaves significant room for private hospitals, such as the SSH. While a delegation from the Imam al-Mahdi scouts, one of Hezbollah’s youth groups, has already paid a visit, staff are keen to emphasize that they will treat Lebanese citizens and foreign patients regardless of sect or politics. Without the party propaganda, or the religious and political insignia normally present in Hezbollah’s institutions, the SSH offers a subtle way of garnering support outside the group’s ideological base.

Hospital director Hussein Nahle confirmed that services will not be provided free of charge, but will be at “very moderate prices that any citizen can pay,” without going into details. That indicates how the SSH appears to be geared towards catering for some of Lebanon’s poorest communities, feeding into narratives from Hezbollah and the late Islamic Republic’s founder Ayatollah Ruhollah Khomeini claiming to represent “the oppressed.”

Wissam, a 39-year-old inpatient from Ein al-Hilweh Palestinian refugee camp, received treatment for tramadol addiction at what he said was a “discount” and a “reasonable price.” The refugee camp suffers from chronic poverty, with resultant social and health issues.

With uncertainty over the future ability of UNRWA, the United Nations agency for Palestinian refugees, to provide social services, the Islamic Health Unit may see ripe fruit in the needs of such a community. There may be no overt political coercion at the hospital, but when the Islamic Health Unit treats alcoholics, drug addicts and people suffering from poor mental health, it allows Hezbollah to ingratiate itself with communities frustrated at the lack of decent care provision in state hospitals, or affected by uncertain aid budgets—as in the case of Palestinians.

Policy makers in the US and Europe have been alerted to Hezbollah’s control over Lebanon’s healthcare in recent months. The party won control of the Ministry of Health in the coalition government formed in January. The SSH is slightly separate from this; it’s a private hospital and management says it doesn’t receive Ministry of Health funding. Yet foreign governments risk missing Hezbollah’s continued use of private health services to win support.

If the Party of God provides much-needed mental health and rehab services where the Lebanese state fails to, it will win points and favor. The SSH is evidence that it can continue to do this, despite the Trump administration’s current “maximum pressure” campaign.