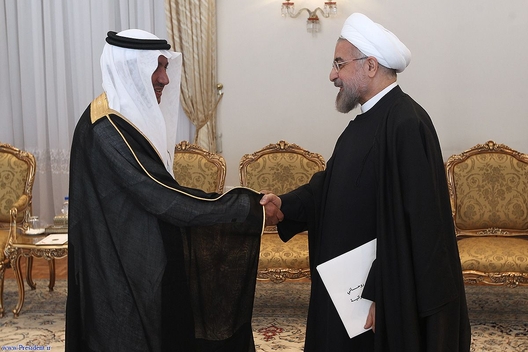 It’s hard to overstate the regional impact of the rivalry between Iran and several Gulf Arab states—most notably Saudi Arabia and the United Arab Emirates—bordering in recent years on enmity.

While these countries haven’t come close to direct warfare, tensions have impacted many regional conflicts in the Middle East including in Syria, Yemen, and Iraq, and festering instability in countries like Lebanon, Bahrain, and even among the Palestinians.

More even than the struggle against terrorist groups like al-Qaeda or Islamic State of Iraq and al-Sham (ISIS), the Arab-Israeli conflict, and Turkish-Kurdish struggles, the confrontation between Iran and Gulf Arab countries has provided an ideological framework that generated proxy conflicts and greatly exacerbated existing ones. As a result, this has caused Iran and Gulf Arab countries to search for every opportunity to bedevil each other, and expand their own influence while limiting the other side.

These contradictions boiled over with the execution of the Saudi Shia dissident and secessionist cleric Nimr al-Nimr in January 2016, and the subsequent mob attacks on Saudi diplomatic missions in Iran, which led Riyadh to end its ties with Tehran. But tensions have been a constant feature of the relationship since the 1979 Iranian revolution, and particularly following the 2003 US invasion and occupation of Iraq.

From a Gulf Arab perspective, since the ouster of Iraqi President Saddam Hussein, Iran hasn’t only gone from strength to strength in the Middle East, but has been systematically encroaching into the Arab world through a campaign of destabilizing Arab countries and utilizing proxies and militias to exploit or create chaos in Arab societies in order to expand its influence. Iran sees itself surrounded by enemies and casts its role in Arab countries like Syria and Iraq as combating terrorism in order to enhance stability and security.

Two recent conflicts have brought them closer than ever before. In Syria, Iranian forces and Iran-backed militias engaged in direct combat against Gulf Arab-sponsored rebel groups. And in Yemen, Gulf Arab forces have battled Iran-sponsored Houthi rebel fighters. In each case, one side has been directly confronting clients or proxies of the other.

Conventional wisdom suggests that relations are presently as bad as ever, if not worse. Tehran has blamed the United States and Gulf Arab countries for terrorist attacks inside Iran. Riyadh and Washington blame Iran for a series of missile attacks by Houthi rebels in Yemen against Saudi cities.

Both countries are reacting to a new campaign of maximum pressure against Iran unleashed by the Trump administration following its withdrawal from the 2015 nuclear agreement. The Iranian leadership feels angry and alarmed, particularly since sanctions have helped greatly exacerbate a serious economic crisis in Iran which, in turn, intensified a range of social and political tensions within the country.

Saudi Arabia and its allies, by contrast, feel that Washington is once again fully on their side, which will lead to a reversal of strategic victories for Iran in the Arab world since 2003.

Yet few believe there is a military solution to the tensions between Iran and Gulf Arab countries. Tehran may wish to become a revolutionary regional superpower, but its leaders understand that its appeal is limited to certain, largely majority Shia or Shia-dominated areas.

Therefore, it’s not surprising that Iran has been more open to dialogue in recent years, believing it’s entering any such discourse from a position of strength.

Riyadh and Abu Dhabi, by contrast, are resistant to a direct dialogue under the current circumstances, believing Iran would be shaking with one hand and sticking the knife in with the other. And, of course, they hope that Washington’s newly aggressive posture towards Iran will lead to strategic setbacks that allow them to negotiate with Tehran on more equitable terms, if not from a position of relative advantage.

So, eventually, dialogue will be necessary. But it’s impossible to imagine a leap from the current estrangement and widespread proxy confrontation to a new norm of cooperation and comity. To put it plainly, any rapprochement will have to be realized in stages, and the creation of a functional dialogue itself would be a major accomplishment.

Efforts by Kuwait and others to engineer that have failed spectacularly. The key may be to develop a sequential process, in which successfully dealing with one issue leads logically to the next, until the most damaging regional problems are dealt with and the basis for greater stability is restored.

Such a framework for progress could form by demonstrating the mutual gains, building confidence, and laying the groundwork for the next constructive step, as well as reducing the chances of additional irritants and sources of tension.

Ending the war in Yemen is an obvious first step in the process, given its centrality to Saudi concerns and Iran’s limited interests in the country. It’s hard to imagine a working dialogue going forward until this conflict is contained and possibly resolved.

Second, both sides can and should agree on the political independence, territorial integrity, and need for stability in Syria and Iraq. This would reflect a generalized understanding of spheres of influence and a balance of power in the region that is mutually acceptable, sustainable and reflective of the actual conditions in the countries in question. In effect, Saudi Arabia and its allies will have to tolerate a more powerful and influential Iran than they would like, but Tehran cannot continue to impose its will by force on parts of the Arab world in which it currently operates as a hegemonic power.

Finally, it’s essential that Hezbollah return to serving its constituency in Lebanon and stop acting as an international revolutionary vanguard supporting a range of militias and proxies throughout the region. Ending Iran’s support for militias and strategy of promoting and exploiting state weakness in much of the Arab world will have to be a central theme, and of any successful process. This third stage would represent, in effect, Iran agreeing to move away from its reliance on proxies to pursue its interests at the expense of its Arab neighbors while others recognize its legitimate regional role and interests.

Such a sequential framework is potentially realistic and practicable, and it’s hard to imagine a more ambitious approach succeeding under the current circumstances. And it may be that such a dialogue cannot be entertained now. However, sooner rather than later the limitations of what all sides can achieve in the era following the US withdrawal from the nuclear agreement will become evident. Regime change in Iran is highly unlikely, but Tehran won’t be able to isolate Washington and its allies or keep the nuclear deal afloat for long.

When the dust settles, Iran and Gulf Arab countries—as well as United States—will have to confront the limitations of what can be achieved under these circumstances and once again look for a plausible modus vivendi. Then a constructive dialogue should become possible, particularly if Iran suffers strategic setbacks in the Arab world where it has overreached.

That could help ensure Iran’s negotiating positions are more realistic and that Gulf Arab countries can enter such a dialogue with more confidence and, therefore, realism. That would help set up the long-term compromise described above where both sides get less than they want, but as much as they need, from each other.

Hussein Ibish is a senior resident scholar at the Arab Gulf States Institute (AGSIW) in Washington, DC. Follow him on Twitter: @Ibishblog.