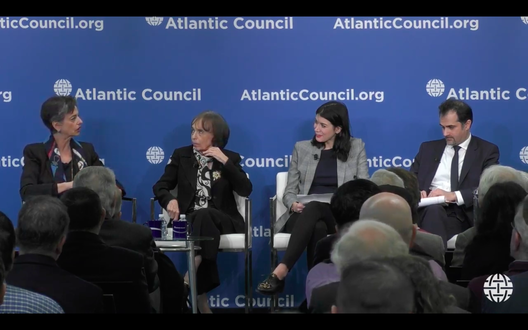 Iran forty years after its Islamic revolution is facing a grave economic crisis and growing popular discontent. It continues to commit acts that deepen its isolation even as it benefits from the mistakes of its adversaries. US sanctions are more punishing than anticipated but will probably not cause Iran to alter policies of greatest concern to Washington, such as regional interventions and ballistic missile development, and are instead strengthening hardline elements as Iran approaches a key political transition. Meanwhile, society has already undergone a cultural counter-revolution that aging ayatollahs cannot reverse.

These were among the insights gleaned from a day-long conference at the Atlantic Council on February 12. Organized in conjunction with the Center for Strategic & Diplomatic Studies at the University of South Florida, it brought together veteran scholars and up and coming experts with recent field experience in Iran. Many of the speakers also wrote blog posts, which were collected on our IranSource site.

Humility is always in order when trying to predict the future of a country as large and complex as Iran. Lulled by the personality of Shah Mohammad Reza Pahlavi and his role during the Cold War, which included a huge appetite for US weapons, US policymakers missed the coming of the revolution in the late 1970s. But unlike then, Iranians now lack “clear, identifiable [opposition] leadership” with a large “social base” inside the country, in the words of Mohsen Milani, who directs the Center for Strategic & Diplomatic Studies. US policymakers, he warned, “should not confuse discontent with a willingness to launch a revolution” especially when Iranians remember how the last one turned out and see the meager results of US-induced regime change in Afghanistan and Iraq.

Nazila Fathi, a former New York Times correspondent in Iran, was asked by moderator and Washington Post columnist David Ignatius if a “counter-revolution” had not already taken place in light of the liberal social mores of many young Iranians. She noted that Iranians had been continually protesting the excesses and restrictions of the revolution, despite occasional severe crackdowns, and had forced the regime to permit more personal freedom, such as looser hijab and public concerts. Even if the political system is largely unchanged, “getting these little freedoms matter,” she said. “Iran has evolved and so have Iranian leaders.”

Haleh Esfandiari, the former and founding director of the Middle East program at the Woodrow Wilson Center, said women have been in the forefront of pushing back against reactionary policies and will continue to be “the real instrument of change” in Iran. Holly Dagres, who edits the IranSource blog and lived in Iran as a teenager, noted the communications revolution that has made Iran the most wired country in the Middle East, with 56 million Internet users. Blocked from easy travel to the West, “Iranians are not virtually isolated,” she said. Music from the rapper Cardi B wafts from coffee shops while Iranians are eagerly anticipating the final season of Game of Thrones. Government efforts to impose an “electronic curtain” on Iranians invariably collapse in the face of circumvention tools, she said.

A number of speakers addressed growing Persian nationalism, which they said has supplanted Islam as the main motivation for Iran’s adventurist foreign policies.

Ariane Tabatabai of the RAND Corporation said that “ideology is not the key driver behind Iran’s policy today” and that its foreign interventions are “much more interest driven.” Where once Iran was primarily focused on weakening the central governments of neighboring states so that they could not attack Iran in the devastating way Saddam Hussein’s Iraq did in 1980, she said Iran has developed a “hedging strategy” since the rise of Islamic State of Iraq and al-Sham (ISIS) in 2014. It seeks neighbors too weak to threaten Iran but not so weak that they cannot maintain their territorial integrity and fend off Sunni terrorist groups.

Randa Slim of the Middle East Institute suggested that Iran had probably reached the “ceiling” of its external influence for a variety of reasons, including its Shia faith and lack of appeal to young Arabs as a political and social model. But she also argued that it would be very difficult to roll back Iranian advances because of Iran’s success at grooming and deploying non-state actors, the mistakes of its adversaries and the divisions within the Arab world.

Mohammad Ayatollahi Tabaar of Texas A & M University said it was ironic that the Islamic Revolutionary Guards Corps (IRGC), which was despised by Iranians after it cracked down on protestors after the fraudulent 2009 president elections, was now being seen as the savior of Iran against hostile forces such as ISIS. Policy is “less about protecting Shia brothers and more about Iranian national interest,” he said. He predicted growing influence for the IRGC in domestic politics, particularly the eventual succession of Supreme Leader Ayatollah Ali Khamenei.

The role of Israel was also discussed. Natan Sachs of the Brookings Institution said that while there were some divisions within Israel over the wisdom of the US unilaterally quitting the Iran nuclear deal, there was a broad consensus that Iran poses a significant threat. Hezbollah, Iran’s primary partner, “is a formidable force, considerably more powerful than the Lebanese state,” he said. Referring to Iran’s harsh rhetoric against Israel, he added, that “it’s easier to cause ‘death to Israel’ than ‘death to America,’” given Israel’s proximity to Iran and small size.

Milani called such slogans both counterproductive and “beneath the dignity of an old civilization.” John Limbert, a veteran former US diplomat and one of the fifty-two Americans held hostage in Iran from 1979-81, remarked on Ayatollah Khamenei’s recent modification of the slogan to suggest it only applied to President Donald Trump and other top US leaders, not the American people. “When you have to put footnotes on your slogans, you are in serious trouble,” Limbert said.

In a final panel on Iran’s economy, speakers said that resumed US secondary sanctions were much more punishing than many had anticipated. Sara Vakhshouri, an expert on the oil industry, said Iran’s exports had dropped by a million barrels a day since April 2018, to 1.1 million barrels and would likely decrease to 600-800,000 barrels by May, when waivers issued by the Trump administration to eight countries expire. Iran is also having difficulty selling condensates, which are not sanctioned, and is not getting foreign investment in its energy sector, even from China. Despite the crisis in Venezuela, the world probably has enough crude to maintain harsh restrictions on Iran without a price spike, she said.

Adnan Mazarei, former deputy director of the International Monetary Fund, predicted a 6 percent contraction in Iran’s GDP in the next Persian year and identified “unsustainable trends” in terms of a currency crisis, public debt and undercapitalized banks saddled with nonperforming loans. At the same time, he said, Iran is a “large medium-income country” that is not about to “collapse tomorrow.”

Kevan Harris, a sociologist from UCLA who has done extensive field work in Iran, said sanctions would stymie needed reforms and reinforce a system of “arbitrage” in which those close to the regime would be able to buy staple goods at low fixed prices or at lower exchange rates and sell them at higher prices. Since the revolution, Iranians “have never been able to get what they wanted from the world economy,” he remarked. He said Iran would cope with reduced oil income in part by reducing the percentage of oil revenues going to the National Development Fund from a third to 20 percent. The Central Bank would continue loaning to other banks to keep them solvent, contributing to already high inflation. And Iran’s social safety net, while frayed, would diminish the pain for the poor.

Speakers questioned what these economic hardships would achieve. Limbert, who as a deputy assistant secretary of State in the Obama administration, oversaw sanctions aimed at convincing Iran to negotiate over its nuclear program, said, “to achieve a goal, you have to have a goal… I don’t see a coherent vision for what we want.”

New negotiations between the US and Iran are inevitable but will probably not happen until after 2020 US elections, the panelists said. Asked by Limbert if Iranian policy was “regime change in Washington,” Milani replied, “They have as much chance of succeeding as Washington does in Iran.”