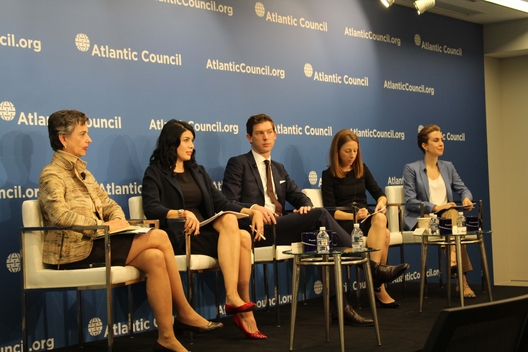 The Trump Administration’s second wave of sanctions against Iran went into effect earlier this month, directed against Iran’s vital oil and petrochemical sector, its Central Bank, and other financial institutions. However, Washington’s diplomatic isolation as a result of its unilateral withdrawal from the Joint Comprehensive Plan of Action (JCPOA) and its desire to mitigate oil prices softened some of the intended negative impact on Iran, which is already employing a variety of coping mechanisms.

The Atlantic Council’s Future of Iran Initiative detailed these mechanisms in a new issue brief, How Iran Will Cope with US Sanctions, co-authored by Holly Dagres, a nonresident fellow at the Atlantic Council’s Scowcroft Center, and Barbara Slavin, director of the Future of Iran Initiative. The report highlights a number of ways Iran has used in the past to circumvent previous sanctions and is using again. Among them are relying on neighboring countries such as Afghanistan, Iraq and Turkey, putting oil on tankers that mask their national identity, creating front companies and using barter trade. Iran is also looking forward to the European Union (EU) creating a Special Purpose Vehicle (SPV) to facilitate commerce with the EU and other nations.

Dagres and Slavin, along with experts David Mortlock, Elizabeth Rosenberg and Meredith Sumpter, analyzed Iran’s approach to the new sanctions and the international response during a panel discussion on November 7 at the Atlantic Council in Washington.

Dagres began by noting that Iran has had more than year to prepare for the sanctions given President Donald Trump’s clearly expressed desire to leave the JCPOA. Dagres pointed to the role Afghanistan has played in allowing Iran to convert its currency into US dollars. Slavin mentioned that two million Iranians recently visited Iraq as religious pilgrims and also had an opportunity to change rials into dollars.

In its oil sector, Iran incentivizes customers by offering free shipping and using its own tankers and insurance.

Mortlock, a nonresident senior fellow at the Atlantic Council’s Global Energy Center, noted that unlike the situation in 2012, when sanctions had wide international support, European countries as well as China and Russia now oppose the sanctions.

Rosenberg, director of the Energy, Economics, and Security Program at the Center for a New American Security, said the Trump administration’s decision to grant waivers to eight countries to continue to purchase Iranian oil reflected the administration’s need to take into account the impact higher oil prices could have on US voters prior to the midterm elections.

Sumpter, head of research strategy and operations at the Eurasia Group, focused on the likely responses of China and India. Sumpter said it is unlikely that New Delhi will reduce Iranian oil imports to zero since any price spikes could hurt Prime Minister Narendra Modi’s chances of re-election in 2019. Moreover, India has longstanding strategic ties with Iran and does not want to drive Iran closer to China. Beijing has insisted that it will not accept Washington’s demands but has stopped for now trade with Iran through Kunlun bank, perhaps awaiting creation of the European SPV or seeking concessions on other trade disputes with Washington.

The speakers also addressed the humanitarian problems exacerbated by these sanctions. Despite the fact that food, medicine and medical devices are supposed to be exempt from sanctions, the Trump administration has yet to give guidance on payment channels. Dagres said the sanctions would hurt the Iranian people far more than the Iranian government. Iranians who previously relied on Western medicine now struggle to access cancer drugs, she said. Iranians are reluctant to rely on supplies from China, she added, saying a pharmacist told her that syringes imported from China in 2012 had dried blood on them. Dagres said sanctions are a form of warfare resulting in declining GDP, increased unemployment and rising corruption, and promoting an exodus of Iranians from their homeland.

The panelists called into question the purpose of the sanctions and doubted they would cause Iran to change its regional policies. Dagres and Slavin concluded that pulling out of the JCPOA was a mistake for Washington, and that the agreement should have been used as a foundation for further negotiations.

A webcast of the event can be watched here.