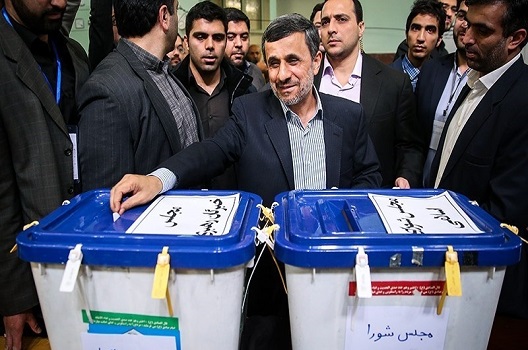 Until recently, few observers inside or outside Iran gave much weight to the notion of a comeback for discredited former president Mahmoud Ahmadinejad.

The disqualification of Ahmadinejad and his former top aide, Esfandiyar Rahim Mashaei, for the presidency in 2017, followed by the arrests of Mashaei and former vice president Hamid Baghaei on charges of corruption and misuse of public funds, seemed to signal the complete defeat of Ahmadinejad’s  “deviant current” (Jaryan-e enhefari), the label that conservative factions had given to his group.

Yet the challenge to the political system from this current appears not only to have persisted but to have grown in light of widespread protests that erupted late last year in provincial towns and cities. The protests, over the high cost of living, corruption and unemployment, have echoes in Ahmadinejad’s political propaganda and his perceived role as the champion of the “dispossessed” (mostazafan), the urban and rural poor.

While Ahmadinejad did not start these protests, they reflected a shift in the composition of the leadership of Iranian opposition movements from intellectuals, the middle class and the urban bourgeoisie to low-wage workers and unemployed youth. For this reason, it is possible to argue that Ahmadinejad could still play a role in Iranian politics despite memories of his fraud-tainted 2009 re-election.

Ahmadinejad is now leading what he calls the “dowlat-e bahar” (the government of spring) movement, which has continued to battle the “strong circles of power” of Iranian institutions. Beyond harsh criticism of the head of the judiciary, Sadeq Larijani, and the rest of the Larijani family, which Ahmadinejad has long accused of corruption, the former president has also charged his successor, Hassan Rouhani, with bad governance.

Recently, Ahmadinejad gave a speech entitled, “Barjam, present, past and future,” on the failure of the Rouhani government to develop the national economy. The point of the speech was that “Barjam” – the Farsi acronym for the Joint Comprehensive Plan of Action (JCPOA) or the now-endangered Iran nuclear deal – had failed to promote local industries and adequately employ Iran’s substantial human capital. Of course, critics of Ahmadinejad can point to the draconian sanctions Iran experienced under his presidency – brought on by a rapidly accelerating nuclear program – as well as protectionist and populist measures that devalued the national currency and depressed the living standards of many Iranians.

Nevertheless, Ahmadinejad’s group has continued to present itself as the most important opposition voice within the system. It has relied on social media, alternating between Twitter and Telegram – which often have been blocked – rather than on national television channels, newspapers or radio, which have been employed by reformists and more orthodox conservatives. In an effort to court sympathy, the group recently publicized emaciated photos of jailed former vice president Baghaei, who has gone on a hunger strike. Still, the “government of spring” is confined to its self-discourse, while trying to identify with the discontent of sectors of the population.

The Ahmadinejad current may also be at a disadvantage in a climate of renewed sanctions. Supreme Leader Ayatollah Ali Khamenei has called for unity between hardliners and reformists against the “common enemy” of the United States and the Trump administration to diminish the appearance of cracks within the Iranian system.

But Ahmadinejad’s potential challenge to that system could increase in the aftermath of the Khamenei leadership. The former president’s political decline dates to clashes with Khamenei in 2011 when Ahmadinejad tried to fire a minister of intelligence who was a close associate of the supreme leader. In his public speeches, Ahmadinejad frequently refers to the popular legitimacy he supposedly enjoyed as president, compared to those who “command without the vote of the people.”

The succession to Khamenei will be a decisive moment for the Islamic Republic. Although it would be difficult for Ahmadinejad to come back without the support of the Revolutionary Guards, which turned against the former president because of his disrespectful attitude toward Khamenei, Ahmadinejad’s focus on pre-Islamic nationalism, economic populism and Shi’ite traditionalism could still resonate with large constituencies in the country.

Putting forward new leaders of his current could help keep the movement alive and re-establish it as a legitimate political force. It may be necessary to choose outsiders (gheyr-e khodi, as Ahmadinejad presented himself in 2005) that lack a negative reputation and can offer the prospect of a non-clerical but still Islamic system based on the imminent return of the twelfth imam as a cathartic moment of justice on earth.