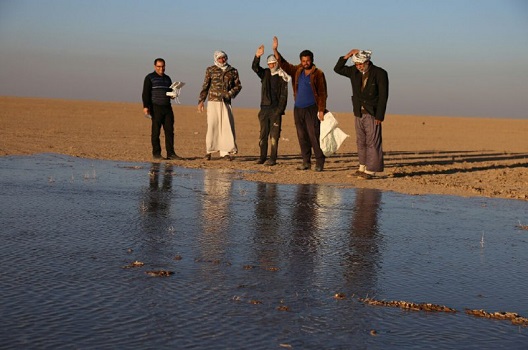 In January I wrote a piece for this blog after widespread protests in Iran and outlined actions that should be taken by the government to enhance the lives of Iranians. In that piece I talked about the water crisis in Iran very briefly and was told by a reader on Twitter that the water section needed more attention. This piece is my response.

Iran has been facing a crisis regarding water for many years and it’s far more existential than the nuclear program or the fate of the Syrian regime of Bashar al-Assad. Almost every day in Iran, there are protests by farmers regarding water shortages and the diversion of this precious resource from one area to the other. The effects of a warming climate and lower precipitation over the years have exacerabated the problem but it cannot be fully blamed on meager or inconsistent rainfall. The human factor – especially mismanagement — is the strongest cause for what Iran is facing now.

Iran is a dry country with around 250mm of rain annually. One would think, when it comes to locating key industries, and especially water-hungry ones such as steel or ceramic tiles, the availability of water would be taken into account, but unfortunately that has not occurred.

For many years, candidates for parliament have managed to get elected by promising to bring factories to their cities. Bigger cities with more members of parliament tend to have more clout. So it’s no surprise that many factories are located around major metropolises such as Isfahan.

For example, the Mobarake Steel Company in Isfahan consumes around 27 million cubic meters of water, which amounts to six percent of the city’s total consumption. Mobarakeh is not the only industrial complex around the city; there are other water-hungry ones such as the Isfahan Petrochemicals Plant and the Esfehan Steel Company.

But industry is not the major consumer of water around Isfahan and in the country at large. Agriculture accounts for around 90 percent of total water usage in Iran. Because the country is mostly arid, the agricultural sector relies on underground water resources to continue production.

Unfortunately, this sector has been poorly managed for many years. Using traditional methods that date back centuries, farmers still rely on flooding irrigation, which wastes around 65 percent of the water used. Transportation of water from wells to farms is another factor that increases water wastage by 12 percent. Every year, farmers must dig deeper and deeper wells.

When Iran’s population was smaller, farmers could get away with using such inefficient methods. But with some 85 million people, this will no longer work.

In greenhouse farming, for example, 90 percent less water is used compared to traditional methods and if done correctly, production can increase ten-fold.

My own university in New Zealand, Massey University, has helped maintain  New Zealand’s edge in agriculture, which is an important part of the economy. Unfortunately, in Iran, the scientific agricultural community is usually disconnected from farmers. Rigorous studies on using newer and genetically modified seeds, or modifying plants to be more resistant to salination in the soil, are being carried out in academia but farmers never hear of them.

Another factor in the malfunction of the agriculture sector is the ineffectiveness of the Agriculture Ministry. The ministry, which provides fertilizers, bank loans and seeds, should be the connecting cord between academia and farmers. The ministry should be helping farmers move away from high water usage crops such as wheat and rice to crops more suited to Iran’s climate such as rapeseed, canola and medicinal herbs.

Recently, the ministry announced that it was banning planting rice anywhere other than the northern provinces. This is a wise move but it comes very late. Rice has been profitable to grow in water-scarce places around Isfahan, and this change should have occurred a long time ago.

Similarly, watermelon plantations should not be located in the province of Sistan and Balochistan. For every kilo of watermelon, 170 liters of water is consumed. Is there no other product that suits the quality of soil, climate and water levels in this province?

Given the extent of the crisis, the agriculture ministry and Department of the Environment should be going into emergency mode to regulate water usage. But instead of encouraging change, the country’s security services are jailing environmentalists and frightening experienced dual nationals to flee.

The agriculture sector in Iran is a major employer as well as a source of food for the population. Drastic action is required to revolutionize Iran’s agriculture. Otherwise with current water usage levels, the sector will die and many areas of the country will become uninhabitable.