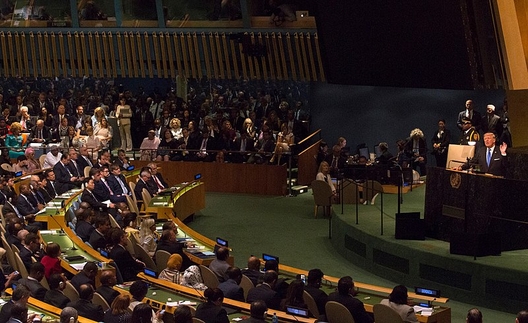 To say that the US-Iran relationship is at new low would be an understatement.

Whatever slim opening existed as a result of the 2015 Joint Comprehensive Plan of Action (JCPOA) has been closed shut, replaced by a cacophony of mutual threats, personal insults, financial sanctions and the absence of even basic communication between Washington and Tehran.

Donald Trump, who won the presidency partly because of his vow to make better deals for the American people, has instead ushered in a period of intense uncertainty with Iran. This could very well produce a dangerous miscalculation if communication channels between the two capitals are not re-opened on a full-time basis.

The Barack Obama administration’s Iran policy could be described as a principled realism—engaging with Tehran when possible and opposing Iranian policies when appropriate. However, the Trump administration has dropped engagement from the picture. The administration has crafted a “maximum pressure” strategy that focuses on waging an economic war against the Iranian economy. The withdrawal from the JCPOA and the reimposition of the secondary sanctions lifted by the agreement are designed to squeeze the Iran to such an extent that Supreme Leader Ayatollah Ali Khamenei will have no option but to return to the negotiating table in a weakened position. Washington is operating on the assumption that, sooner or later, the Iranian government will prioritize its wallet over its anti-Western principles.

In the words of Brian Hook, the State Department’s Iran policy coordinator, the “goal of aggressive sanctions is to force Iran into simple but hard choices of whether to cease or persist in the policies that trigger the sanctions.”

Secretary of State Mike Pompeo in May laid out twelve demands for fundamental changes in Iran’s policies, including an end to uranium enrichment and to the development of ballistic missiles, to stopping military support for the Assad regime in Syria and the Houthis in Yemen. But to Iran, Washington’s strategy appears aimed not at a change in policies but the Islamic Republic’s total collapse. At a minimum, Tehran sees an American-led campaign to contain Iranian power in the Middle East and keep Iran perpetually weak for the benefit of Israel, Saudi Arabia and the United Arab Emirates.

The lack of trust and mutual understanding between Iranian and American leaders is compounded by the absence of any dialogue mechanism. The communication channel utilized by former Secretary of State John Kerry and Iranian Foreign Minister Mohammad Javad Zarif is for all practical purposes shut down. Having withdrawn from the JCPOA, the US is not even entitled to a seat at the Joint Commission that meets every three months to review implementation of the deal.

Nobody is on the other end of the phone line.

The Trump White House appears to be asking for nothing short of full, unconditional capitulation from an Iranian government that prides itself on resisting foreign dictates.

Notwithstanding Iran’s currency problems and the relative turmoil within its political system—President Hassan Rouhani was rebuked for his government’s economic performance, weeks after the Iranian Majlis voted to remove two of his cabinet ministers—Trump’s gamble on Iran is not coercing Tehran into new negotiations.

Supreme Leader Ayatollah Ali Khamenei is as opposed to renewed talks with the United States as he has ever been, and unless he changes his mind, even exploratory discussions with the Americans on substantive issues will be unlikely.

A key test will come this month.

On September 26, Trump is scheduled to chair a UN Security Council meeting on what US Ambassador Nikki Haley has described as “Iran’s violations of international law.” Under Security Council procedure, the country that is the subject of the meeting is invited to participate. This means there is a possibility that Rouhani—or more likely Zarif—could be in the room while Trump speaks.

On the other hand, Iran could boycott the meeting in protest—allowing other members of the Security Council to voice opposition to the US singling out Iran for criticism when it is the United States that has violated the UN Security Council resolution that codified the JCPOA. Even if Iran attends the session, Trump may well have departed before Iran gets to speak, since UN procedure requires giving all fifteen members of the Council the opportunity to address the body before a non-member.

Trump has indicated repeatedly that he is ready to meet with his Iranian counterpart at the UN. According to Iranian officials, Trump expressed his interest in talking with Rouhani at last year’s UN General Assembly.  While the Iranians rebuffed the request, it was at least an overture; all Obama managed was a brief phone call with Rouhani despite the years-long negotiations that led to the JCPOA.

Of course, the reality of Washington and Tehran signing an accord on anything in the current environment is slim to none. Iran has stressed that negotiations with the US are unacceptable as long as Washington is “bullying” the other parties to the nuclear deal to terminate business ties with Tehran.

Also, Trump faces opposition from within his own administration among hawks such as national security adviser John Bolton who regard negotiations with Iran as a gift to an “evil” regime whose economy is now on the ropes.

Still, diplomacy can accomplish seeming miracles in the right circumstances. The annual UN meeting offers the possibility for contacts with adversaries, perhaps at a lower level and in a multilateral setting. It would be a blunder of significant proportions if Iran and the US were to not take advantage of this opportunity

Daniel R. DePetris is a foreign policy analyst based in New York City and a columnist for the American Conservative and the Spectator. Follow him on Twitter: @DanDePetris.