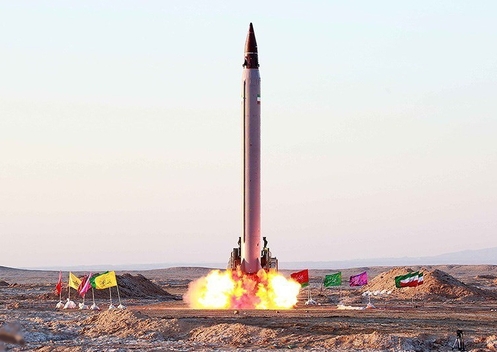 In the aftermath of the US unilateral withdrawal from the nuclear deal codified by UNSC resolution 2231, Iranian diplomats are embracing this element of international legality to accuse the Trump administration of wrongdoing.

During more than a decade in which Iran was at odds with world powers over its nuclear program, the country was confronted by several UN resolutions, including six that were accompanied by sanctions. Those resolutions provided the foundation for international sanctions that fostered a previous maximum pressure campaign against Tehran and helped convince Iran to negotiate more seriously in 2013 and eventually reach a deal in 2015.

The Trump administration, however, has inaccurately accused Iran of violating the resolution by continuing to test missiles.

On December 1, Secretary of State Mike Pompeo tweeted that Iran “just test-fired a medium range ballistic missile” which he concluded is a violation of the UN resolution. The announcement came a few days after Brian Hook, the State Department’s special representative for Iran, displayed rockets he accused Iran of providing to Yemen’s Houthi rebels that have been fired into Saudi Arabia.

France and Britain, which support the JCPOA, have joined with the Trump administration to criticize the missile tests. Their support resulted in a Security Council meeting on December 4, which gave a platform to outgoing US envoy Nikki Haley to again criticize Iran. Haley said: “If the Security Council is serious about holding Iran accountable and enforcing our resolutions, then at a minimum we should be able to deliver a unanimous condemnation of this provocative missile test.”

In response, Iran did not remain silent. While the meeting was going on in New York, Foreign Minister Mohammad Javad Zarif tweeted: “Making a mockery of the UNSC won’t obscure failure to fulfill obligations and to hold US to account over non-compliance” adding, “Rather than undermining 2231, better to work towards its adherence by all.”

In the wake of the US unilateral exit from the JCPOA, other countries are keen to stick to the agreement and its restraints on Iran’s nuclear program. According to the International Atomic Energy Agency (IAEA), the global nuclear watchdog, Iran is adhering to its commitments under the nuclear deal. Although Tehran has recently voiced dissatisfaction over the lack of action by Britain, France and Germany—the so-called E-3—to help Iran benefit from the sanctions relief it was promised in 2015, the Islamic Republic clearly relishes the rare feeling of holding the geopolitical high ground.

After high-level meetings in Brussels, Iran’s deputy Foreign Minister Abbas Araghchi told the Islamic Republic of Iran News Agency that “benefits from the JCPOA are not only economic. We have political benefits among other things too.” He added, “as long as we benefit from this combination, we will stay in the deal.”

The E-3 is trying hard to create a Special Purpose Vehicle (SPV) by early next year that will facilitate Iran-European trade. Details of the plan have not emerged, although it is believed to be a sort of ledger for barter transactions that will initially be used to facilitate commerce in food, medicine, and other non-sanctioned goods. European sources have said nothing substantial has been put on the table so far.

The Trump administration knows well that there are not going to be significant economic benefits for Iran from the SPV. That’s why there seems to be an unspoken agreement between Brussels and Washington that the Europeans can move forward with their attempt to keep Iran in the deal while siding with the US when it comes to other activities by Tehran such as its missile program.

As for Iran, it clearly understands that there is not much to gain from the SPV but, as Araghchi acknowledged, there are other benefits in remaining within the JCPOA at least for the time being.

By sticking to the deal, Iran is performing a delicate dance to avoid getting stuck again in a web of UN sanctions. It knows that Russia and China—which also have veto power on the Security Council—will not permit Iran to be sanctioned by the council again so long as it complies with the JCPOA.

In the meantime, Tehran will be trying to survive US secondary sanctions and hoping that President Donald Trump is a one-term president succeeded by a US leader willing to negotiate with Iran on more realistic terms.