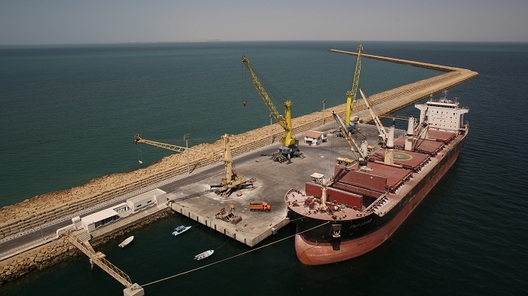 The Trump administration has exempted the Chabahar port from US sanctions as a gesture toward India, which sees the outpost as a means of facilitating trade with Afghanistan. However, its true potential requires more integration between Iran and among Central Asian states.

Muddassir Quamar, associate fellow at the Institute for Defence Studies and Analyses, a New Delhi think tank, told this author that trade with any country—not just Afghanistan—through Chabahar port is not under sanctions.

However, Erich Ferrari, a leading sanctions lawyer in Washington, disagreed. He said, “According to my understanding, the waiver for Chabahar port was issued by the State Department for the purpose of reconstruction and development of Afghanistan and operation of Iran’s Chabahar port by India for these ends. Based on the reporting in the media, it doesn’t appear that the waiver would cover trade with other countries.”

The author spoke to Omid Rahimi, an Iranian researcher on Central Asia, on the potential of Chabahar for Iran and the economies of Iran’s Central Asian neighbors:

Kazakhstan
Kazakhstan, as the biggest economy of the region, stands to benefit more from Chabahar than other Central Asian states. The Kazakh ambassador to Iran Askhat Orazbai emphasized that his country is ready to invest in Chabahar. The Incheboron Railway connects Kazakhstan to Chabahar via Turkmenistan and Gorgan, a city in Iran. Kazakhstan already has a consulate in Bandar Abbas on the Persian Gulf and Iran has allocated land for Kazakh logistical terminals in Chabahar. One possibility is that Kazakhstan could enter into an oil swap deal with Iran and export its oil from Chabahar. Kazakhstan has also joined the new corridor of Uzbekistan-Turkmenistan-Iran-Oman which includes Chabahar.

Kyrgyzstan
Kyrgyzstan has signed an agreement with the Chabahar Free Zone about logistics and transit. But the economy of Kyrgyzstan is very small. Worker remittances and export of minerals form the major part of its GDP. If Iran were to reach a free trade agreement with the Eurasian Economic Union (EEU)—which also includes Russia, Belarus, Kazakhstan and Armenia—it could lead to greater trade via Chabahar.

Tajikistan
Iran-Tajik relations are complicated. During a recent visit to Iran by the Tajik foreign minister, Behrooz Aghaei, the director general of ports in Sistan and Baluchistan province, said, “Chabahar is the best option for Tajikistan compared to other Iranian ports due to its exemption from US sanctions.”

However, Tajikistan has the poorest economy of former Soviet republics and remittances by Tajik workers in Russia provide a major part of Tajikistan’s GDP. The country’s main trading partners are Russia, China, Kazakhstan and Turkey. According to data from the  Observatory of Economic Complexity of the MIT Media Lab, 60.5 percent of exports and 86 percent of Tajik imports go to these four countries. Another issue is the poor state of Tajikistan – Turkmenistan relations. Recently, cargo from Tajikistan faced problems passing through Turkmenistan. Without stating any reasons, Turkmenistan stopped trucks bound for Tajikistan from entering from Iran. At the border with Uzbekistan, trucks destined to and from Tajikistan were also stopped. Trucks transporting goods to other countries, including Uzbekistan and Kyrgyzstan, were allowed to cross the Turkmen border unrestrained last August and in February this year. Turkmen authorities said that the trucks that were stopped were because of security purposes and to combat “drug trafficking.”

Until transit issues are resolved, there is no available route from Tajikistan to Iran apart from though Afghanistan. Russia has repeatedly asked Tajikistan to join the EEU, but Tajikistan has refused.

Turkmenistan
According to Rahimi, a member of Turkmenistan’s Chamber of Commerce visited Chabahar and expressed interest in exporting via the port. Turkmenistan can play an important role in the International North South Transport Corridor (INSTC), an agreement which was signed between India, Iran, and Russia in 2000 but is only now being completed. The INSTC is to connect India, Iran and Russia via the railway routes of Sarakhs and Incheboron. However, Turkmenistan’s behavior regarding this corridor has been unpredictable.

Uzbekistan
President Shavkat Mirziyoyev of Uzbekistan needs new transit routes. But there are political problems. Iran and Uzbekistan did not have good relations during the presidency of Mirziyoyev’s predecessor, Islam Karimov. Mirziyoyev has shown interest in improving ties but does not want to antagonize the US. A scheduled visit to Uzbekistan last year by Iranian President Hassan Rouhani was cancelled. Recently, Kamal Kharazi, a former Iranian foreign minister and senior adviser to Supreme Leader Ali Khamenei, visited Uzbekistan to discuss the transit corridor. The deputy prime minister of Uzbekistan visited Chabahar last year. The special representative of the Uzbek president in Afghanistan has also talked about connecting Uzbekistan to Chabahar via Afghanistan.

Azerbaijan
In addition to trade with Central Asian nations, there is great potential for Iranian trade with its neighbor in the Caucausus, Azerbaijan. Azerbaijan last year allocated $500 million to Iran to facilitate completion of the Rasht-Astara railway. A trilateral meeting of the leaders of Russia, Azerbaijan and Iran will be held in Sochi soon. The main agenda is the INSTC. If everything goes according to plan, the route from India through Iran, Azerbaijan and then Russia andon to Europe will be launched next year.

Daniel Khazeni-Rád, a journalist covering Eurasia, told this author that the INSTC is a potential game changer for the countries along the multi-modal transport system. Farhad Ibragimov, a Moscow-based expert on the INSTC, added that the project could make countries along the route more attractive to foreign investors. Beyond Russia and India, the developed countries of Southeast Asia are ready to join.

In its initial stage, the North-South corridor is planned to transport 6 million tons of cargo per year, rising to 20 million tons.

In 2017, 27,000 tons of cargo were transported via the INSTC corridor; in 2018, 287,000 tons.The figures for the first two months of this year suggest that the volume of freight will be at least 600,000 tons this year. In other words, the project is gaining momentum and will eventually turn into one of the largest trade routes in the world.

Chabahar port also has great potential. The question is whether it can be realized despite US sanctions.

Aveek Sen is an independent journalist working on cybersecurity and the geopolitics of India’s neighborhood, focusing on Pakistan, Afghanistan, Iran, and Bangladesh. Follow him on Twitter:@aveeksen.