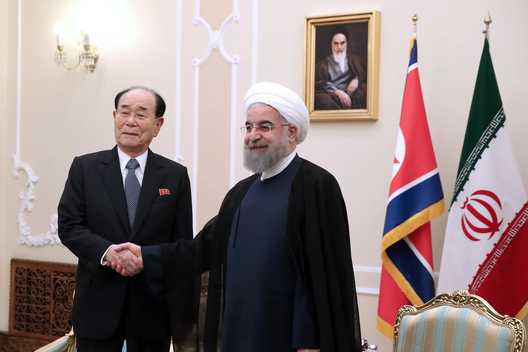 Before he was Iran’s Supreme Leader, then-President Ayatollah Ali Khamenei visited North Korea in 1989—a trip that included a ride on the Pyongyang subway and a motorcade ride past throngs of cheering North Koreans. It was intended to send a strong message: North Korea and Iran, driven by mutual enmity toward the United States, were becoming close friends.

A casual observer could be forgiven for concluding that in the years since, Iran and North Korea have provided plenty of reason to believe that Khamenei’s words back then weren’t just empty talk. Tehran and Pyongyang maintain high-level contact, with Iranian President Hassan Rouhani receiving North Korean Foreign Minister Ri Yong Ho in Tehran in August 2018 shortly after the first US-North Korea summit in Singapore. Both have been, to put it mildly, at odds with the United States over their respective nuclear and ballistic missile programs. Both have sought to overcome intense US sanctions and pressure, and aim to increase their military capabilities. And earlier this month, a UN panel of experts indicated two North Korean arms-dealing organizations are now “extremely active in Iran.”

The truth is more complicated. Despite a shared outlook on some geopolitical issues and similar challenges, North Korea and Iran have maintained a largely transactional partnership centered on mutually beneficial arms sales rather than a comprehensive and strategic alliance based on a broad foundation of cooperation. The latest news about North Korean arms organizations operating in Iran reflects this longstanding transactional partnership. But the inability of Washington to put a stop to these activities reflects failed US policies toward Iran and North Korea that are not giving Washington much leverage over either country, while reducing the risks of angering the United States and increasing the incentives for cooperation between the two countries.

Friendly North Korea-Iran ties first emerged after the 1979 revolution and quickly became distinctly transactional as Iran needed arms to fight the Iran-Iraq War. North Korea, with its close proximity and relationships with the Communist bloc, was a natural source for these weapons. “By the end of the war in 1988, some 300 North Korean military advisers were on the ground in Iran,” wrote Bruce Bechtol in Foreign Affairs. “Pyongyang had reportedly sold Tehran more than $1 billion in conventional arms, training, and military assistance.”

This policy was by no means driven by any special North Korean affinity for Iran, but rather Pyongyang’s desire to secure much-needed foreign hard currency through these sales. During these years and afterward, North Korea sold weapons not only to Iran but to Syria, Myanmar, and others. And despite the warm words and high-level engagement between the two countries, North Korea also sought quietly to develop its relationship with Baghdad even as the Iran-Iraq War continued.

In the 1990s and 2000s, the North Korea-Iran arms relationship shifted toward missiles and related military assets as both countries eyed nuclear programs. The extent of North Korea-Iran cooperation on their nuclear programs is unclear. Some argue there is a full-fledged exchange of technical expertise and even fissionable nuclear material. But what the evidence strongly suggests is that Iran has acquired, copied, and used North Korean missile technologies. The Shahab-3 medium-range ballistic missile is Iran’s version of North Korea’s Nodong-1 missile, and the Iranian Ghadir-class submarine appears to be effectively a copy of the North Korean Yono-class midget submarine. According to a 2017 report by the Office of Naval Intelligence, Iran has fourteen North Korean midget submarines and has also purchased North Korean torpedo/missile boats that allow for rapid attacks at sea. Taken together, it’s clear North Korea has made a significant contribution over the years to Iran’s navy and missile program.

The transactional value of this military relationship is even more compelling than it was in the 1980s. Missiles are central to Iran’s deterrence and power projection strategy in the region, while North Korea benefits from heightening the global threats to the United States and faces even more pressure to generate sources of currency as international sanctions bite.

The news earlier this month that two North Korean arms organizations, KOMID and Green Pine, are increasingly active in Iran and recently sent their top leaders to visit, then, represents more of a continuation of this longstanding transactional status quo and less of a clear sign that Iran-North Korea ties are becoming substantively stronger. For North Korea, its transactional interest in this relationship may be getting more urgent. Despite on-again, off-again talks with the United States, sanctions on North Korea remain largely in place, and media reports suggested Pyongyang’s foreign currency reserves came perilously close to depletion last year to finance a record trade deficit with North Korea’s key trading partner, China. Arms sales to Iran would help North Korea shore up the cash flow it needs to back its military spending and maintain the lifestyle and support of its elites.

But if the continued North Korean arms activities in Iran don’t necessarily represent a major upgrade in the relationship, they do clearly demonstrate the inefficacy of current US policies toward both countries. Washington has been unable to generate sufficient leverage over Iran or North Korea to make these arms activities too costly or risky for either country. On the North Korea side, the United States has bumbled through the current diplomatic process. Given overly high and inflexible US expectations for results on North Korean denuclearization, there seems to be little prospect of the economic gains or sanctions relief Washington can provide Pyongyang to reduce its incentives to sell arms overseas and heighten the risks if it is caught doing so. Similarly, when it comes to Iran, the US withdrawal from the Joint Comprehensive Plan of Action with Iran minimizes Washington’s leverage over Tehran, reducing the likelihood that the country will incur a significant cost for cooperating with North Korea.

If Washington is concerned about the Iran-North Korea military relationship, then, it needs to take a hard look at its own policies. For now, the key consequence of these US policies that limit its leverage may simply be US inability to stop the North Korea-Iran military relationship. But if Washington continues to isolate both countries and deprive them of other ways to get economic relief, they may well come closer together.

Mintaro Oba is a former US diplomat who worked on Korean Peninsula policy at the State Department. His commentary on North Korea has appeared in The New York Times, The Washington Post, BBC, and other media. He is currently a director at West Wing Writers. Follow him on Twitter: @MintaroOba.

Image: Iran's president meets with Kim Yong Nam, president of the Presidium of the Supreme People's Assembly of North Korea in August 2018 (president.ir)