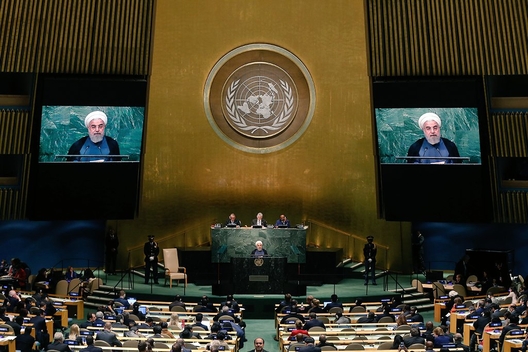 For a country that has so often been isolated in multinational forums, Iran is wrapping itself in international legitimacy and approbation not only from much of the United Nations General Assembly but four of the five permanent members of the Security Council plus the European Union.

The night before US President Donald Trump excoriated the Islamic Republic as “brutal,” “corrupt” and “dictatorial” in a heavily nationalistic and bombastic speech at the General Assembly, the P4+1—Britain, France, Germany, China, Russia and Germany—affirmed their support for the 2015 nuclear accord with Iran and promised a special payment mechanism to allow foreign companies to circumvent sanctions re-instated by the Trump administration.

The step may be largely symbolic. The Iranian currency, the rial, continues its dizzying plunge and most large multinational companies have already fled Iran, panicked by the secondary sanctions that fully go back into force on November 5. But the symbolism of the joint announcement in English and Farsi—and the video clips of Iranian Foreign Minister Mohammad Javad Zarif in friendly and animated conversation with his P4+1 counterparts—conveyed the message that for once, Tehran is the responsible stakeholder and the US, the outlier, when it comes to nuclear non-proliferation.

Iranian President Hassan Rouhani, in meetings with American think tankers and journalists, also put a positive spin on US withdrawal from the Joint Comprehensive Plan of Action (JCPOA), calling the US the loser and asserting Iran’s ability to survive what it regards as unjust punishment.

Speaking to the General Assembly just a few hours after Trump, Rouhani took a swipe at what he called “photo op diplomacy”—an apparent reference to Trump’s summitry with North Korea, which has yet to yield denuclearization—and invited the US to return to UN Security Council resolution 2231, which codified the JCPOA: “We invite you to come back to the negotiating table you left,” he said.

Rouhani added, “We appreciate the efforts of the international community, the European Union, Russia, and China in supporting the implementation of the JCPOA and consider the full realization of the commitments stipulated in it a precondition for the survival of this significant accomplishment of diplomacy.”

As a charter member of the State Department’s list of sponsors of terrorism and a country that was referred to the Security Council for its nuclear program in 2006, Iran is loathe to leave the JCPOA despite receiving almost none of the economic benefits it was promised. The Security Council resolution that codified the accord also lifted UN-endorsed sanctions against Iran. The last thing Tehran wants is to give that body an excuse to snap them back.

Indeed in an interview with NBC News, Rouhani accused the US of “trampling upon” the UN resolution in hopes that its withdrawal from the JCPOA would convince Iran to also exit the agreement so “the case would be referred to the UN Security Council and Iran could be brought under sanctions again.” Even if US sanctions bite hard, Iran can say it holds the high ground and try to wait out the Trump presidency.

Trump, who has boasted of his personal diplomacy with North Korea’s Kim Jong-un, has suggested several times that he would be happy to meet with Rouhani in New York. In a tweet on Tuesday, shortly before he addressed the General Assembly, Trump went so far as to call Rouhani “a lovely man.”

Yet in the sort of head-snapping schizophrenia one has come to expect from Trump, he unloaded on the Islamic Republic in his speech like a jilted suitor. While not mentioning any Iranian leaders by name, he described them as “brutal” and “corrupt” and said they “sow chaos, death and disruption” in the region and have “embezzled billions of dollars” belonging to the Iranian people. Channeling George W. Bush before the 2003 US invasion of Iraq, Trump said, “We cannot allow the world’s leading sponsor of terrorism to possess the planet’s most dangerous weapons.”

Of course, Iran has foresworn nuclear weapons and accepted limitations that make it virtually impossible for it to build one for another decade or more. And while it is true as Trump said that “many countries in the Middle East”—namely Israel, Saudi Arabia and the United Arab Emirates—supported his decision to withdraw from the JCPOA, the vast majority of countries are sticking by the deal.

It has not escaped Iran’s attention that while Trump was fulminating at the UN, his administration remains embroiled in a variety of controversies, from chaos within the Justice Department to a contentious confirmation of a Supreme Court justice accused of abusing girls and women. Iran is also well aware that the US electorate will be voting in a few weeks in midterm elections that are likely to end Republican control of one if not both houses of Congress.

A political shift on Capitol Hill by itself will not change US policy on Iran—although one senator, Democrat Tom Udall of New Mexico, has introduced legislation to bar a US attack on Iran without Congressional authorization.

There is much that Iran could do to win genuine bipartisan support in Washington—and shore up its ragged domestic popularity. It could stop using bellicose and counterproductive slogans such as “Death to America” and “Death to Israel” at government rallies and try harder to end regional conflicts in which its Islamic Revolutionary Guards Corps and proxies are playing prominent roles. It could release dual nationals and other prisoners unjustly jailed on bogus charges and stop its repression of women and civil society.

But in accepting the JCPOA, Iran addressed a major issue of concern for its region and the entire world. It should be encouraged to stay within the agreement as long as possible. Washington should return to the deal and use it as a foundation to press legitimate concerns about other issues. The time for yelling as a substitute for diplomacy—on both sides—should be over.

Barbara Slavin directs the Future of Iran Initiative at the Atlantic Council. Follow her on Twitter: @barbaraslavin1.