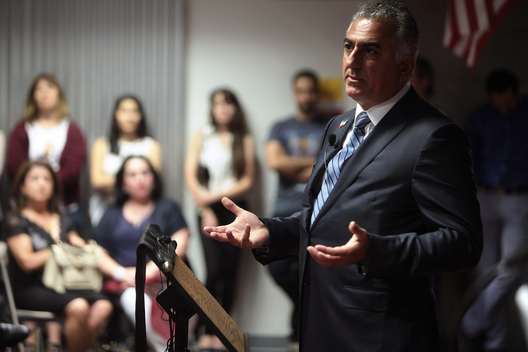 Iran has faced widespread demonstrations and acts of civil disobedience for more than one year. Even members of the elite, including the grandson of Ayatollah Ruhollah Khomeini and daughter of Hashemi Rafsanjani, have said that the collapse of the regime is an increasing possibility. The regime’s vulnerability has not only motivated existing opposition groups, but has sparked the creation of new organizations led by younger Iranians.

One such group is Iran Revival, or farashgard. (In Zoroastrianism, Iran’s ancient pre-Islamic religion, farashgard is the period of the world’s rebirth after the defeat of Ahriman, the God of Darkness.) A loosely organized network of political activists spread across the US, Canada, Europe and Iran, the group, which describes itself as a “political action network,” seeks the overthrow of the Islamic Republic through a campaign of peaceful civil disobedience mimicking past successful revolutions in Eastern Europe and the former Soviet Union. In particular, Iran Revival has called for “Million Man” demonstrations and gatherings across Iranian cities to overwhelm the security forces and shut down the regime.

Iran Revival represents a new phenomenon in Iranian politics. Disillusioned by the siren song of “reformism,” many young Iranians have found inspiration in forces antithetical to the Islamic Republic and outside its narrow circle of permitted political factions. Secular, pluralist, and nationalist, Iran Revival has rallied around Prince Reza Pahlavi, the son of the late Shah and heir apparent to the Pahlavi throne. From his exile in America, Pahlavi has long urged Iranians to overthrow the regime through peaceful protests and civil disobedience. Pahlavi has also stated that Iran’s post-Islamic Republic political system must be established through a popular referendum monitored by international observers.

But it would be wrong to call Iran Revival a strictly monarchist group. Many of its supporters are either disillusioned reformists or supporters of a republic, although many members appear to support a constitutional monarchy with the Shah serving as a unifying national figure, a king who reigns but does not rule, much like the British monarch.

One of the most visible and influential members of Iran Revival is Amir Etemadi, a former student activist and political organizer during Iran’s contested 2009 presidential election and ensuing Green Movement. Etemadi paid a heavy price for his activities; he was arrested and jailed for two months in Iran’s notorious Evin prison and sentenced to a further term of two years. Etemadi was lucky to escape Iran and make his way to the US, where he currently serves as the editor in chief of Taghato, an online magazine advocating for a free and democratic Iran.

When asked by this author why he supports Pahlavi, Etemadi said, “I have two reasons for supporting Reza Pahlavi. First, he has persistently fought against the regime and consistently advocated for a secular and democratic Iran for the past forty years. Second, I believe the Pahlavis did a lot to develop Iran. These characteristics and the growing popularity of the Pahlavis among Iranians today make the prince an outstanding partner for us.”

Calling himself a barandaz or overthrower, Etemadi believes that Iran Revival’s appeal to younger Iranians could prove a powerful force for bringing change to Iran. Many if not most of the country’s young population view pre-revolutionary Iran with nostalgia, a view reinforced by Pahlavi’s secular and nationalist credentials and widespread popular dissatisfaction if not revulsion with the current regime’s disastrous economic, social, and environmental policies.

Unable to openly organize within Iran due to severe regime repression, Iran Revival uses social media and foreign Persian language television and radio broadcasts to spread its message far and wide across Iran. Its supporters inside Iran have launched a nationwide campaign of civil disobedience featuring calls for “million man” demonstrations and the slogan “long live the Shah” written on buildings, storefronts and street signs all over the country.

It has even picked the color turquoise, long a symbol of ancient Iran and the monarchy, as its representative color. The color has also been adopted by multiple other groups and people within Iran as a symbol of freedom from the Islamic Republic.

It’s impossible to measure the extent of Iran Revival and Pahlavi’s appeal. The regime does not permit fair and free elections and public opinion surveys are completely unreliable in the current climate of terror and repression.

But nostalgia for Pahlavi rule, along with secularism, nationalism and a deep hatred for the Islamic Republic are a powerful social and political force.

The 2017 Iranian uprising and the ensuing nationwide civil disobedience movement led by women, laborers, teachers, students and many other Iranians has also featured dozens of demonstrations calling for the return of the Shah.

“Reza Shah, blessed be your spirit,” has been a popular slogan among the demonstrators, with thousands of sports fans shouting the slogan during soccer matches in Tehran and Esfahan.

Iran Revival is one of many opposition groups scattered among the Iranian diaspora, estimated to number between five and seven million people. But it is one of the few groups almost entirely composed of younger Iranians.

Dena Zairi, a young architectural lecturer, is one of them. She calls London, where she was born, home. But she has an intense attachment to Iran and strongly believes in its potential after the Islamic Republic. Zairi believes that the 2017 uprising is an entirely different phenomenon than past demonstrations, as Iranians have finally given up on the hope that the regime can be reformed. For her, the 2017 uprising was a “call to duty” to save Iran from the Islamic Republic.

She believes that her political inclinations are not as important as “core values that tie monarchists, republic seekers, and others together: a secular, democratic, and representative political system.” Nevertheless, Zairi favors a constitutional monarchy like the British one for Iran, which she sees as a politically “neutral” symbol of unification given the country’s ethnic and religious diversity.

Iran Revival’s goals are in no way easy to achieve. The regime still commands a hardcore group of adherents willing to kill to save it.

But Iran Revival may possess a weapon no longer available to the regime: hope. Iranians long for the rebirth and revival of Iran as a respected and responsible member of the international community. The Islamic Republic, celebrating its fortieth anniversary this year, has offered nothing but impoverishment, repression, and misery. For millions of Iranians like Etemadi, Zairi, and Pahlavi, only a total rebirth of Iran can lead to its ultimate salvation.

Alireza Nader is founder and CEO of New Iran, a nonpartisan and nonprofit research and advocacy organization based in Washington, DC. Follow him on Twitter: @AlirezaNader.