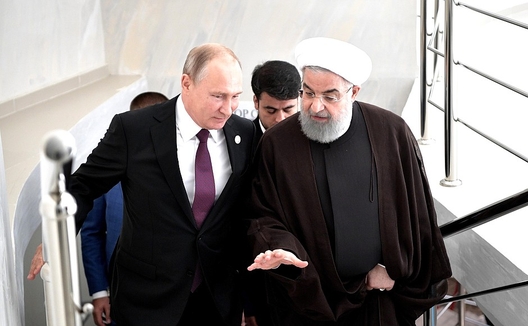 Russia’s alliance with Iran to buttress embattled Syrian President Bashar Al-Assad is approaching a critical phase, as pro-government forces consider how to retake Idlib province, the last major stronghold of Syrian rebels. While this alliance has successfully shifted the balance of power in favor of the Syrian government, it will likely not lead to a long-term strategic partnership between Iran and Russia, as their strategic goals in Syria and the region at large are quite divergent.

Iranians historically have been wary of their giant neighbor to the north. In the nineteenth century, the Persian Empire was forced to sign a series of humiliating treaties relinquishing claims over territories in the South Caucasus to Tsarist Russia. Even today, Iranians are concerned that after sacrificing millions of dollars and thousands of lives in Syria, Russia will throw Iran under the bus for its own benefit. Recently, an Iranian lawmaker, Behrooz Bonyadi warned of “Syrian-Russian rapprochement at Iran’s expense.”

Iran’s skepticism about Russian intentions is not unfounded. In recent months, Russia has given the Israeli military a green light to pound Iranian positions close to the Israeli border. Reports further indicate that Russia has accepted Israel’s demands to push Iranian troops away from the border. Russia even reacted with relative calm when Syrian forces shot down a Russian fighter jet, mistaking it for an Israeli military plane.

In fact, the issue of Israel’s security is one of the main sources of disagreement between Iran and Russia. Russia is the stronger state in the alliance and is a balancing power that seeks to maintain good relations with all parties to the Syrian conflict. Unlike Iran, Russia does not aim to undermine Israel’s security; rather, it seeks to establish itself as a major player in the Middle East, and preferably, undermine the US presence in the region.

Syria is Iran’s land bridge to Lebanon and serves as Hezbollah’s lifeline. Ever since the Islamic Republic was established, Iran and Syria under the Assad family have maintained close relations. In fact, Syria was the only major Arab country that openly supported Iran during its bloody conflict with Iraq in the 1980s. Both Syria and Iran see Israel’s military might as a serious security threat.

Israel’s failure to defeat Hezbollah in a month-long 2006 war proved that the Iran-backed militant group could withstand Israel’s superior conventional and unconventional power. From Iran’s perspective, the fall of Assad would threaten the future of Hezbollah, which serves as Iran’s asymmetric deterrent against a potential Israeli attack.

The fall of Assad’s regime could further threaten Tehran by triggering a domino effect on pro-Iran forces elsewhere in the Middle East, especially in Iraq. A weakened Iraq would have tilted the balance of power in favor Iran’s Sunni rival, Saudi Arabia, which has long supported extremist forces in Syria and Iraq. In essence, one can argue that Syria is a primary theater for the cold war between Iran and Saudi Arabia.

Russia’s strategic goals in Syria are different. President Vladimir Putin has always resented the role of the US in the collapse of Soviet Union, and has sought to reclaim Russia’s status as a global power. He views the US presence in the Middle East as an obstacle to his ambitions.

By establishing itself as the dominant player in the Syrian conflict, Russia can use Syria as a bargaining chip with the US over the sanctions it imposed on Russia after it moved into Crimea.

Further, Russia’s decision to intervene in Syria marks the first military campaign outside former Soviet territory; its success will not only be a great political victory for Putin but will buttress Russia’s scarred sense of national pride.

The presence of thousands of radical Islamic extremists among the Syrian rebels is also a serious threat to Russia’s internal security. The civil war in Syria has been a de-facto training ground for Northern Caucasus extremists that might eventually return home to attempt to establish an Islamic Caliphate at Russia’s predominantly Muslim southern doorstep. The experience of two bloody conflicts in Chechnya in the late 1990s has convinced Russia to nip any new jihadist threat in its bud.

Incorporating Turkey into the Russian-Iranian coalition to defend Assad’s regime has created a rift among Assad’s opponents, primarily the United States and Saudi Arabia. Following trilateral meetings in the Kazakh capital of Astana in March, the three countries met again in Tehran on September 7 to coordinate operations in Idlib province. One can argue that if Assad is able to recapture Idlib, the military phase of the Syrian conflict will essentially be over and he will have an upper hand in any political process.

The likelihood that Idlib will fall will give Iran and Russia a “mission accomplished” banner in the Syrian campaign. By now, Iran can be certain that Hezbollah is not in immediate danger. However, this does not mean that the Syrian civil war has reached its end-point. Iran has spent considerable blood and treasure in Syria but it is the political process, and the fate of Assad, that will determine Iran’s overall success.

Iranian officials have publicly announced their intention to stay in the post-civil war era which Israel and US consider a serious threat to Israel’s security. However, US economic sanctions and growing public dissent in Iran against the intervention in Syria have put Iran in a predicament. Iran could use the opportunity provided by the fall of Idlib to quickly wrap up its campaign, declare victory and honorably withdraw.

It is at this stage that Iran and Russia’s strategic goals diverge. As was mentioned, Russia seeks to balance its relations with Iran and Israel. As a global power, the Syrian civil war is a transformative stage for Russia’s grand strategy in the international system. Russia could easily use Iran as a bargaining chip to seek concessions from the US over the expansion of NATO as well as economic sanctions. One could argue that Iran’s cooperation with Russia is a temporary alliance with limited common goals, not a long-term strategic partnership. As Lord Palmerston famously put it, “We have no eternal allies and we have no perpetual enemies. Our interests are eternal and perpetual.”

Sina Azodi is a PhD student in political science at the University of South Florida, and a research consultant at Princeton University’s Program on Science and Global Security. He received his Bachelor‘s and Master’s degree from the Elliott School of International Affairs, George Washington University. He focuses on Iran’s foreign policy and US-Iran relations. Follow him on Twitter @azodiac83.

Image: Russian President Vladimir Putin and Iranian President Hassan Rouhani on the sidelines of the Caspian Summit on August 12, 2018 (The Kremlin)