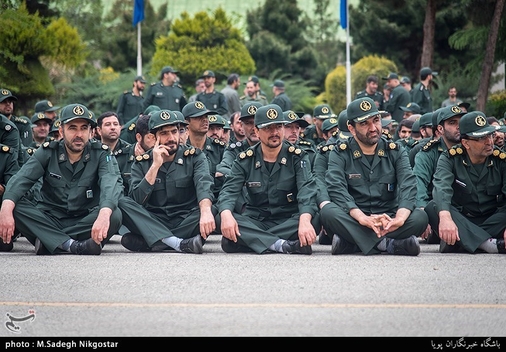 The Trump administration on April 8 designated Iran’s Islamic Revolutionary Guard Corps (IRGC) a foreign terrorist organization—the first time a country’s military has received such a status.US President Donald Trump said in a statement that the designation “sends a clear message to Tehran that its support for terrorism has serious consequences.” The statement added that the Trump administration “will continue to increase financial pressure and raise the costs on the Iranian regime for its support of terrorist activity until it abandons its malign and outlaw behavior.”

US Secretary of State Mike Pompeo tweeted that the action is “an important step to counter the Iranian regime’s terrorism” and that it “will help starve the regime of the means to execute this destructive policy.”

He added, “We must help the people of Iran get back their freedom,” though it’s unclear how this designation will impact the Iranian people.

US National Security Advisor John Bolton tweeted that the designation “demonstrates our commitment to maximize pressure on the Iranian regime until it ceases using terrorism as tool of statecraft. The corrupt IRGC invests in terrorism, while Iran’s people suffer.”

On April 7, IRGC commander Major General Mohammad Ali Jafari had threatened “reciprocal measures” and said the region would lose “will lose peace and quiet” if the United States went ahead with designating the IRGC as a foreign terrorist organization.

We asked Atlantic Council experts for their analysis on this development. This is what they had to say:*

“In a post-ISIS Middle East, the IRGC and extremist Shia groups under its command are now the biggest threat to the stability of the region and to US interests and those of its allies. The post-ISIS era in the region will be marked by a sharp increase in tensions between the United States and the Islamic Republic.”

“As Special Representative for Iran Brian Hook said, ‘this is just another chapter’ in the Trump administration’s policy of ‘maximum pressure’ on Iran.

Unfortunately, it is unlikely to alter Iranian policies in the region or domestically and will make it even harder to conduct needed diplomacy with Iran to resolve regional conflicts.

Given that the IRGC is already sanctioned by the US Treasury, this step is both gratuitous and provocative. It will also put countries such as Iraq and Lebanon in even more difficult situations as they have no alternative but to deal with the IRGC. It will strengthen calls by pro-Iran groups in Iraq to expel US troops.”

“It’s a provocative escalation. The IRGC has been sanctioned by numerous US authorities over the last decade. Multinationals from Europe and Asia have avoided doing business with them for some time now. This latest round of sanctions does little to move the needle. It just escalates the potential for a showdown between US and Iranian forces in the region which are at times in very close proximity to each other.”

William Wechsler, director of the Atlantic Council’s Middle East Programs:
“Both the positive and negative impacts of this action are generally overstated. This act will offer modest opportunities for the strengthening of US sanctions, and the potential negative repercussions to US national security interests are likely also to be similarly minimal. The only real material impacts are likely to be on domestic politics in the US, Iraq and possibly Israel.”

“The designation is bad news for ongoing peace talks between the Afghan government and the Taliban. In fact, both the IRGC and the government of President Hassan Rouhani have been trying to bring the Afghan government and the Taliban together in peace talks, to protect their own investments in Afghanistan and secure the border between the countries. An IRGC-US confrontation in Afghanistan would be damaging to all sides.

Internally, this ill-timed designation could also bring Iran and the United States a step closer to war. The IRGC has been under pressure for having been behind many misdeeds, including being involved in lucrative dam building businesses, which turned out to be deadly as seen in recent floods. However, the new US move may increase the legitimacy of the IRGC as ‘forces of resistance’ in case of a confrontation with the US and Israel.”

* This is a breaking news story, check back for more analysis.

Image: Members of the IRGC sitting at a military event (Tasnim News Agency)