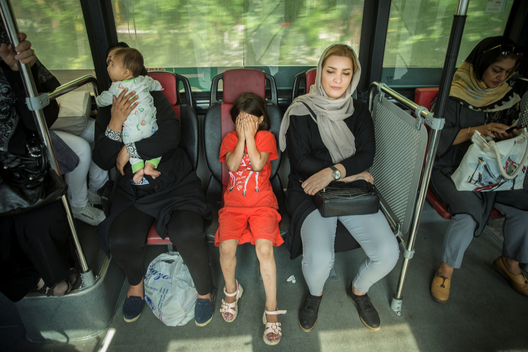 Girl and women ride on a bus in Tehran (Reuters)

A long-awaited bill that would allow the children of Iranian women married to foreign spouses to obtain citizenship for the first time hangs in the balance. Iran’s elected executive and legislative branches have advanced this bill, which would change the lives of thousands of Iranians. But its potential protections have been eroded by appointed bodies, revealing the increasingly steep path for reforms via legislative action in Iran.

Iran’s Civil Code provides that children and spouses of Iranian men are granted nationality automatically, but Iranian women married to a foreign spouse cannot pass their nationality to their husband and children.

Activists and policymakers have campaigned to change this discriminatory status quo in the nationality law for over a decade, with the most recent attempt put forth by the Rouhani administration. First Vice President Eshagh Jahangiri said the draft was inspired by Maryam Mirzakhani, a world-renowned Iranian mathematician and Fields Medal recipient who passed away from cancer in 2017. Because her husband is not Iranian, her daughter cannot obtain Iranian nationality.

On May 13, parliament initially passed the draft law submitted by the Rouhani administration that would allow Iranian women married to men with foreign nationality to request Iranian citizenship for their children who are under age 18. A child with an Iranian mother who has already turned 18, can also request Iranian citizenship if they do not have a “security problem,” according to the draft bill.

Yet, as has often happened, a rights-improving legislative change is being stymied by one of Iran’s unelected bodies. On June 15, the powerful conservative-leaning Guardian Council rejected the bill, apparently due to a “fear of security problems.” To appease the council, a month later on July 15, parliament amended the bill to condition granting citizenship to children who have been found to “not possess a security problem.” Under the new draft law, the Intelligence Ministry would determine whether there was any problem which would open the door to arbitrary disqualification of these children and a lack of due process for challenging those decisions.

The law does not define what constitutes a security problem—does one have to be convicted of a crime or simply to have been accused? Furthermore, there is a well-established pattern of authorities prosecuting people for peaceful activism on national security charges. This only raises further serious concerns about the grounds that the authorities will use to interpret and apply the law, particularly in eastern and western border areas where cross-border marriages are more common and authorities assert an even tighter grip over peaceful activism.

Among its powers is “approbatory supervision,” which it has used to disqualify an unlimited number of candidates for public offices who express what the council members consider to be dissent. The Guardian Council can also veto parliamentary bills or send them back for revisions. It has used this power to reduce the protection of rights in new laws—for example by opposing the elimination of executions for drug-related offenses. In 2017, it even tried to retroactively reinterpret a law that had already come into force to try to bar non-Muslims from running for city councils.

As a result, many people who want to reform abusive laws will not run for office as they are certain they will not make it past the council’s scrutiny. Likewise, parliament members often avoid pushing for bills that have no chance of getting the Guardian Council’s approval.

The result is that there have been only a few recent successful legislative attempts to protect human rights, and those have come as a result of consensus building among political factions. There is still hope that some positive reform of the nationality law will ultimately succeed and benefit many children. But it is clear that it will only come despite the best efforts to block it by a regressive, unaccountable Guardian Council that prioritizes the interests of an abusive security establishment over the protection of human rights in Iran.