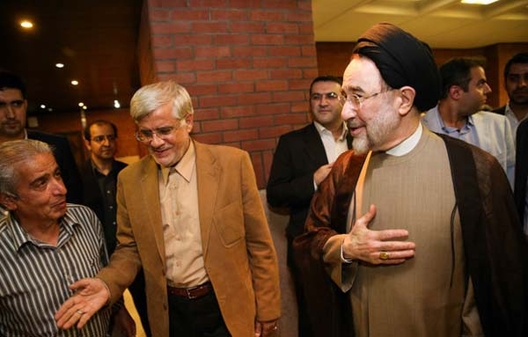 The Iranian president, Hassan Rouhani, can hardly be billed as a reformist. For that reason, he maintained his position as Iran’s Supreme Leader’s confidante while acting as his representative in the Iranian Supreme National Security Council for twenty-three years, from its inception until his first term election as president in 2013.

Rouhani also escaped unscathed from the 2009 controversy-marred re-election of his predecessor, Mahmoud Ahmadinejad. While that election and the mass protests that followed produced numerous political casualties in the reform camp, Rouhani not only emerged intact but was in a good position to run as a consensus reformist-pragmatist candidate down the road.

During the 2013 presidential elections and again in his 2017 campaign, Rouhani took a radical, reformist stance against hardliners in order to mobilize the social base of Iranian reformers. Since 2017, however, Rouhani has gradually—though assuredly—distanced himself from the reformist camp. He has adopted a policy of silence and compromise in his interactions with the conservatives, which has sparked intensifying criticism from influential reformists.

On January 7, Mahmoud Vaezi, presidential chief of staff and one of three people with constant access to Rouhani—the others being Mohammad Nahavandian and Mohammad Bagher Nobakht—confronted the reformists who criticize Rouhani and his administration. “As I have repeatedly said,” explained Vaezi, “those who think that criticizing the administration will lead to advantages in future elections are simply wrong.”

A day later, Abdullah Naseri, a prominent reformist and adviser to the former reformist president Mohammad Khatami said, “Unfortunately, Mr. Rouhani´s second term has been extremely ignorant [about the demands] of the twenty-four million people who make up Iranian civil society. Most of the reformists believe that he no longer wants to interact [with the reform movement].” Naseri added, “All that concerns him is to emerge from the remaining two years [of his second term] undamaged, and thus maintain his privileged spot in the pyramid of power.”

Four years ago, in clear reference to the Islamic Revolutionary Guard Corps, Rouhani said, “Wherever guns, money, newspapers and propaganda are joined, one can be confident that corruption will arise. Even Abuzar and Salman [allies of Prophet Mohammad] would have become corrupt under an organization that accumulated different aspects of power.”

The days of such radical statements from Rouhani have long since passed.

Rouhani is not alone in disappointing old guard reformists. The “Hope Fraction” in the Iranian parliament was supposed to represent the reform movement. During the past three years, however, this group has been almost completely passive.

Sadegh Zibakalam, a prominent reformer and political activist, says that during the last year Rouhani has been a “giant disaster” for the 24 million Iranians who voted for him. He added that the Hope Fraction also has had an unremarkable political performance. Zibakalam goes on to argue that one cannot simply assume that voters will be as motivated to go to the ballot box in the next parliamentary elections in 2020 and presidential elections in 2021 as they were in the past.

Zibakalam predicts that of the 56 to 60 million eligible voters, most of those who participate in the future elections will come from the 16 million who voted for Rouhani’s conservative rival, Ebrahim Raisi, in 2017.

Against this backdrop, intellectual leaders of the reform movement argue that if the current trend continues, the movement stands to completely lose relevance. From their perspective, the crisis began when they surrendered to the vetting of candidates by the ultra-conservative Guardian Council. Out of fear of being rejected by the Guardian Council, they argue, reformists relinquished their right to introduce genuine candidates, and instead were forced into forging alliances with others such as Rouhani and a large portion of the current members of parliament who only nominally represent them.

Mohammad Reza Khatami, the younger brother of former president Khatami and one of the leaders of the reform movement, says, “I’m not supposed to sign on to whatever decision that these [hardline] gentlemen make.” When asked if he worried that a potential boycott of the upcoming elections could lead to the emergence of another Ahmadinejad, he replied, “I have no doubt that pressure on the reformists and activists will increase. But today we are not living in a world where suppressing the press or throwing people in jail will lead to an extinction [of the reform camp].”

Abbas Abdi, one of Iran’s most influential reformists, similarly says, “If today we were going to have an election under the same rules [i.e. the Guardian Council vetting candidates under the concept of “beneficent oversight”], reformists will introduce no candidate. I have no doubt about that.”

Saeed Hajjarian, who is often credited as the theorist who introduced the reform movement in Iran, also recently said, “[To reformists], the way elections are currently run is comparable to begging for charity or begging for power.” He argues that “the currency of the political bazaar is power” and “if you don’t have that money, it is best to not enter that market until you gain it… If you do, begging will be your only choice… If power never changes hands as an outcome of elections, then what is the point of holding them?”

Although the voices of those who support a boycott have become louder, not all reform activists embrace this idea. Zibakalam, for instance, says that he would vote despite the limitations imposed by the system. Mohsen Armin, a senior member of the reform movement and former deputy speaker of parliament, argues that reformists should not abandon the ballot box as this would pave the way for a sweeping victory by hardliners. Instead, he argues, pressure should be applied on the Guardian Council to accept the movement’s own candidates.

As Iran’s economy continues its downward spiral as a result of a sweeping US sanctions, mismanagement and rampant corruption, the mounting poverty and stress that Iranians experience has led people to vent their anger at the system as a whole as seen in social media outbursts, strikes, and scattered street protests. Under the circumstances, were influential reform leaders to boycott future elections, it would be reasonable to expect that a wide-scale consensus could emerge through social media and potentially paralyze the vote. While this could seriously damage the legitimacy of the political system, it could also lead to other consequences such as negatively affecting Iran’s relations with Europe.

A large portion of society seems to be losing the hope for change. According to former reformist president Khatami, “if the nezam (establishment) insists on its mistakes… [and] reform fails, the society will move toward overthrowing the system.”