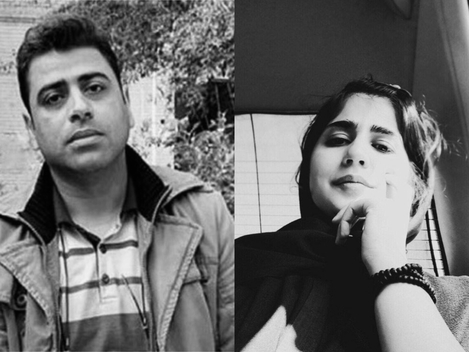 There’s not much good news to share in Iran as Nowruz, the Iranian new year, approaches. The economic situation that played a role in nationwide protests during December 2017 and January 2018 is still difficult as millions of Iranians struggle to live a decent life. Inflation and perceptions of widespread corruption further fuel popular frustration, prompting dozens of labor groups—including truck drivers, steel workers, and teachers—to lead protests against the Iranian government’s economic policies over the past year.

Iran’s security agencies have relied on their usual authoritarian tactics to respond to protesters, holding some of the country’s most prominent labor rights activists behind bars for their roles in organizing peaceful demonstrations. Ismail Bakhshi and Sepideh Gholian, from Khuzestan province, are just two of these brave activists. They were re-arrested on January 20 after claiming that they had been tortured in detention.

Bakhshi and Gholian have now been detained for almost two months. Their families have not been given any information on their conditions or the charges against them. Relatives and friends have continued to gather daily in front of the Khuzestan prosecutor’s office demanding clarity on their situation. Family members have told the media that they are concerned authorities will coerce the two activists to retract their statements about torture.

The authorities first arrested Bakhshi, who had emerged as a prominent representative of Haft Tappeh Sugar Cane Workers Union, and Gholian, a local journalist covering the labor protests, in November 2018, during the month-long strike of sugar cane workers over unpaid wages and the privatization of the company. Weeks before his arrest, videos of Bakhshi’s speeches articulating worker demands were shared widely on Persian language social media and among activists and independent groups across Iran.

After being released from a 25-day detention in December 2018, Bakhshi posted on Instagram that Intelligence Ministry agents in Khuzestan province had severely tortured him, and Gholian said she had witnessed authorities severely beating him as he was arrested.

These torture allegations caused outrage on social media, and several members of parliament demanded clarification from the Intelligence Ministry. The Rouhani administration, parliament, and judiciary subsequently announced a committee to investigate Bakhshi’s torture allegations. But within a few days they concluded that no torture had occurred. Instead, on January 19, the Islamic Republic of Iran Broadcasting (IRIB) Channel 2 broadcasted a program that aired confessions of Bakhshi and Gholian in detention during November 2018. The video also accused the activists of being linked to the Tudeh Party, Iran’s banned Communist party. Authorities arrested the duo again on January 20.

The teachers’ union is another group also becoming an increasingly vocal element in criticizing the government’s mismanagement of the economy and its effects on their pay and work. Since September 2018, the beginning of the school year, the Iran teachers’ association has orchestrated three nationwide strikes to protest low wages and government privatization schemes for Iran’s schools. The authorities have arrested and prosecuted several protest organizers and summoned dozens more for interrogations, yet protests have continued.

Several of these sentences appear to have been particularly harsh. On April 21, 2018, during Iran’s teacher appreciation week, the authorities arrested Mohammad Habibi, a Teachers’ Union member, during a peaceful demonstration against government budget educational policies. The authorities sentenced Habibi to seven and a half years in prison on charges of “assembly and collusion to act against national security,” “disrupting public order,” and “propaganda against the state.”

During the previous rounds of teacher protests in 2015 and after a peaceful protest in front of Iran’s parliament in May 2015, the authorities arrested and prosecuted Ismael Abdi, the teachers’ association secretary-general, and Mahmoud Beheshti Langroudi, its spokesman. Courts sentenced Abdi to six years in prison and Beheshti Langroudi to five years for their role in planning the demonstration in front of parliament. In 2017, the authorities arrested them again after both had been released on bail, to serve their full sentences.

While Iran tramples over citizens’ fundamental right to peaceful assembly, labor protests are not uncommon. In fact, some research suggests that there has been a growing rate of labor protests across the country, and as the economic situation gets more difficult under US sanctions for millions of Iranians, they are likely to continue.

Authorities might think that the best way to maintain their tight grip on dissent is to keep arresting labor leaders, but it could also lead to an explosion of civil unrest. Activists, union leaders, and labor associations are in fact the very people who can channel and mediate popular grievances toward political solutions. If allowed to operate freely, they could act as a safety valve for a broader population that has recently taken to the streets in frustration and anger.

Unfortunately, however, Iran seems to be on the path not only to more repression of labor activists, but also to greater popular frustration and labor protests.