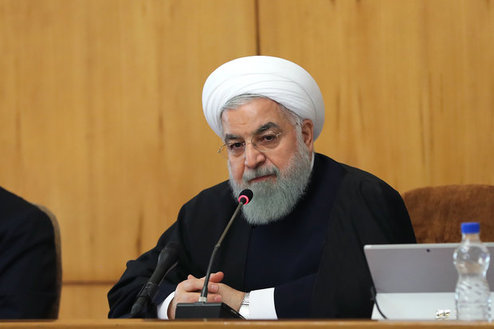 A year after the United States withdrew from the Joint Comprehensive Plan of Action (JCPOA) and six months after it re-imposed sanctions, Iran has said it would reduce its compliance with the 2015 nuclear agreement in sixty days unless the remaining parties take concrete steps to continue trade with Iran. The decision was announced by President Hassan Rouhani in a televised speech on May 8. Rouhani said, “We felt that the nuclear deal needs a surgery and the painkiller pills of the last year have been ineffective … This surgery is for saving the deal, not destroying it.”

The Iranian president warned that Europe has sixty days to prevent US sanctions from impacting Iran’s banking and oil sectors. The news was formally relayed to the remaining signatories of JCPOA: Britain, China, France, Russia, and Germany. Iranian Foreign Minister Mohammad Javad Zarif confirmed the news in a tweet: “On May 8 2018, US withdrew from #JCPOA, violated #UNSCR 2231 & pressured others—incl[uding] #E3—to do the same after a year of patience, Iran stops measures that US has made impossible to continue Our action is within the terms of JCPOA. EU/E3+2 has a narrowing window to reverse this.”

Rouhani also said that Tehran would grow its stockpiles of heavy water and low enriched uranium. He added that if Europe is unable to compensate for sanctions, Tehran will resume constructing the Arak nuclear reactor, which was shut down per the JCPOA.

A French source told The Guardian that Europe would sanction Tehran if it violates the JCPOA. China urged restraint and blamed the United States for the escalation by withdrawing from a multilateral agreement a year ago. Russia’s Foreign Minister Sergey Lavrov, who was at a meeting in Moscow with his Iranian counterpart, called the situation “unacceptable” and created by the “irresponsible behavior of the United States.” The United States is expected to react to the news later today.

We asked Atlantic Council experts for their analysis on this development. This is what they had to say:*

“Iran is doing what the administration of President Donald Trump should have done if it really wanted to apply maximum pressure on Tehran. Instead of dramatically announcing it would renounce the entire JCPOA, it is insisting that it continues to abide by the terms of the deal, while slowly nibbling at its edges. That way it continues to have access to the mechanisms and advantages of nuclear deal while creating new facts on the ground that prompt confusion and discord on the other side.”

“These steps are relatively modest and entirely predictable after the Trump administration announcement that it would seek to force Iran’s oil exports to zero. For example, Iran will not reduce access for the International Atomic Energy Agency, immediately begin to enrich to higher levels or restart enrichment at the underground site at Fordow. It is also not quitting the Nuclear Non-Proliferation Treaty as Foreign Minister Zarif threatened last month in New York.

It is now up to the other parties to the JCPOA to operationalize a means of trading with Iran and soon. Otherwise the 2015 deal will rapidly become history and the Trump administration will have another nuclear crisis—entirely of its own making—on its hands.”

“This action by Iran is as predictable as it is unfortunate. Even more unfortunate is that Iran feels that it is in a position to partially withdraw and at the same time present itself as a victim. The ball is now clearly in Europe’s court and the open question is whether they will accept Iran’s argument or direct as much criticism toward Iran as they have toward the US in response to violations of the previous nuclear agreements.

More significantly, this decision comes at a time when the US intelligence community has reportedly issued a warning of an Iranian attack on US interests, when the Iranian foreign minister has warned of the likelihood of an “accident” in the region, when the US has accelerated the deployment of an aircraft carrier strike group to the Gulf, and when both Iran and the US are openly discussing the potential for a military confrontation. If there was a doomsday clock for a potential US-Iran war, it would have just ticked one minute closer to midnight.”

“Iran’s move, which is still within the JCPOA, may not be satisfying to hardliners, who insist on a complete departure from the agreement. However, it could be welcomed by ordinary Iranians who, despite dissatisfaction with the regime, expect a response to US pressure.

Iran hoped that Europe and its major economic partners, such as India and China, would resist the US sanctions. The new move is also aimed at showing the Europeans that Iran’s patience has a limit. As Heshmatollah Falahatpisheh, a conservative member of parliament and chairman of the National Security and Foreign Policy Commission, stated, ‘The ball is now in the European’s court.’”

“This was expected at some point following the US withdrawal and it does not change the basic US strategy. The US and its allies and partners should deter Iranian nuclear breakout and continue to increase the economic pressure with the goal of bringing Iran to the table to negotiate a better deal.”

* This is a breaking news story, check back for more analysis.

Image: President Hassan Rouhani in a televised speech on May 8, 2019 (Iranian state media)