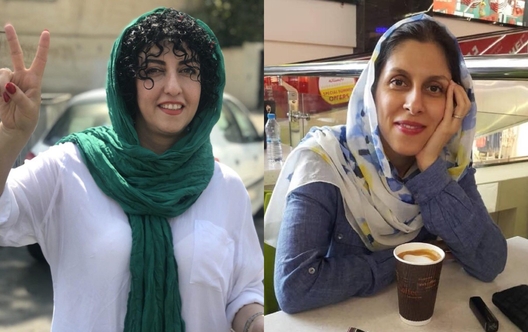 This week, two well-known political prisoners in Tehran’s Evin prison went on a three-day hunger strike to protest their inability to get urgent medical treatment.

Narges Mohammadi, a prominent human rights defender serving a ten-year sentence for her peaceful activism, suffers from a serious neurological disease that causes muscular paralysis. Nazanin Zaghari-Ratcliffe is a British-Iranian dual national serving a five-year prison term on vague national security charges in connection with her past work at the BBC Media Action. She urgently needs an examination for “lumps in her breast” and neurological care for her recurring neck pain and numbness in her arms and legs.

Prison doctors had determined that they both urgently need outside medical care, according to a letter published on January 3. But prison authorities have refused to transfer Mohammadi and Zaghari-Ratcliffe to outside facilities for treatment.

Family members say that both women’s health has deteriorated severely in detention. On January 14, the Thomas Reuters Foundation—Zaghari-Ratcliffe’s current employer—issued a statement noting among other things that her “health is already at its poorest.” In 2013, when Mohammadi—vice president of the banned Defenders of Human Rights Center (DHRC)—was serving a six-year sentence, the authorities released her because of her serious medical condition. But they arrested and prosecuted Mohammadi again after she met with Catherine Ashton, who was the EU foreign policy chief at the time.

International laws on treatment of prisoners state that those who require specialized treatment or surgery not available in detention facilities should be transferred to appropriate institutions or civilian hospitals. Iran’s own prison regulations stipulate similar standards. Unfortunately, Iranian authorities routinelyignore these rights protections that ensure medical care for prisoners. Mohammadi and Zaghari-Ratcliffe are only the latest victims.

Prison and judicial authorities regularly risk prisoners’ health by delaying or preventing their transfer to outside medical facilities. In some cases, these delays have caused severe and irreversible harm. Two years ago, Ali Reza Rajaee, a prominent Iranian journalist, lost an eye and part of his face to a sinus cancer that was left untreated while he was in jail for spurious charges related to his journalism.

Ever since human rights activist Arash Sadeghi was diagnosedwith a cancerous bone tumor in August 2018, prison authorities have seriously interfered withhis right to receiveessential medical care.In September 2018, prison authorities transferred Sadeghi back to prison only three days after surgery to remove the tumordespite explicit medical advice that he should spend more post-operative time at the hospital.

It appears that the judicial and prison authorities are shamelessly leveraging prisoners’ urgent medical care needs to put even furtherpressure on them and their families. This unjustified and arbitrary behavior is all the more odious because many of the prisoners should never have been imprisoned in the first place.

With Iran’s judiciary ignoring domestic safeguards to protect detainees’ rights every day, several prisoners have embarked on hunger strikes to demand that their basic rights as a last resort. On December 23, 2018, Farhad Meysami, a human rights defender who is behind bars for protesting Iran’s compulsory hijab laws, and Nasrin Sotoudeh, one of the country’s best-known human rights defenders, ended their hunger strike after the court agreed to release Reza Khandan, Sotoudeh’s husband, on bail after he had been detained for over three months. Meysami’s other demand was simply to be represented by a lawyer of his choice, as opposed to one from the judiciary’s approved list, which conveniently does not include any human rights lawyers or women.

Earlier in December 2018, activists reported that Vahid Sayadi Nasiri, a political dissident, had died in a Qom prison during a hunger strike. After his death, authorities quickly tried to deflect their responsibility, saying that Sayadi Nasiri was already suffering from “liver issues,” that “his condition deteriorated in detention,” and that he died at the hospital.At least six people died in detention during 2018 in suspicious circumstances with no independent or transparent investigation into their deaths. Sadly, abuse rather than protection is the norm in an arbitrary prison system where detainees are regularly denied fundamental rights.

What our experience tells us is that when asked about the situation of human rights defenders and other political prisoners, Iranian government officials often invoke issues of sovereignty and judicial independence to deflect responsibility. But that doesn’t change the fact that authorities are responsible for detainees’ safety and lives and that no domestic or international law allows officials to unduly delay a prisoner’s access to urgent and essential medical treatment.