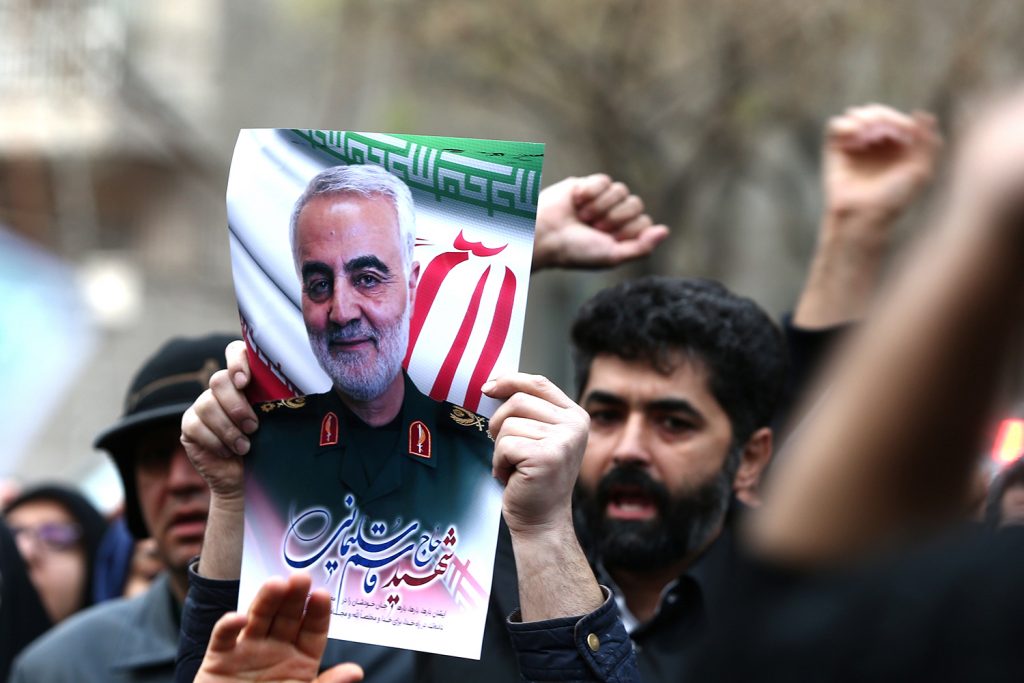 To understand Iran’s capacity to absorb the shock of losing Quds Force commander Qasem Soleimani, it’s important to understand the psychology of Iranian leaders who have gone through many difficult times. Martyrdom and assassination of revolutionary leaders are part of the historical memory and cultural fundamentals of the Islamic Republic.

Iranian officials—especially at such high levels—are ready to be killed at any time. One of Soleimani’s nicknames was “living martyr.”

Soleimani and Iranian officials very well knew that he long passed being “a shadow commander” and was a large fish and perennial target. On several occasions, he told the United States: “Don’t threaten to kill me; I am thirsty for my own blood.”

Soleimani had a habit of going to a famous religious shrine—Hazrat Masoumeh—in Qom before taking any trip outside Iran. This mentality tells us that he had groomed a replacement. Indeed, in the aftermath of his death, Iran announced that Brigadier General Esmail Ghaani had succeeded him.

While Ghaani may not be the mastermind and strategist of Iran’s asymmetric war in the region, he will grow into the role or others will fill the gap. Also, when it comes to retaliation, Iran will use its maximum capacity with resources far beyond those available to non-state actors such as al-Qaeda and ISIS.

One way in which the world will pay a price for the US action is uncertainty in the oil markets.

Oil prices surged sharply late January 2, right after the Pentagon announced the strike, and the long-term impacts could potentially be much greater than the strikes on Saudi Arabia’s main oil producing and processing facilities in Abqaiq and Khurais.

The immediate market reaction and price surge of 4 percent, even before Iranian officials called Soleimani’s assassination an act of war against Iran and called for a “harsh retaliation,” indicates that the common sense about this incident is that the US operation did not make the world and the Middle East region—which is responsible for significant volumes of global oil and gas production—a safer place but rather increased the instability and insecurity in the region.

To have a better understanding of the “Qasem Soleimani risk premium” on oil pricing, we should realize the magnitude of the effect his assassination has on the security of the Middle East region and the flow of oil. The “Qasem Soleimani risk premium” on the oil market and prices could potentially be higher than the Aramco attack and could affect prices for longer. Ambiguity over Iran’s retaliatory actions create a huge uncertainty and risk factor for oil prices and the market. Unlike the Aramco attack where the magnitude of the damage and disruption was clear, there is no evidence or clear understanding of what the short-term and long-term impacts of Soleimani’s assassination on the oil market will be.

Obviously if the region remains calm and the market doesn’t see any harsh retaliations, prices will adjust and balance themselves toward the dominant market narrative of oversupply and lower demand growth. However, the assassination of Soleimani has added a huge uncertainty to the market as it’s not easy to calculate Iran’s retaliatory actions.  Just consider the scenario that the Iranian government vows to remove US forces from Iraq through its proxies in this country. The goal of removing US forces from Iraq is not an easy game but rather a complex series of destructions and conflicts in this country. A scenario like this  not only could damage energy facilities but could ultimately hurt Iraqi production if international companies start evacuating their staff due to security alerts.

After the September 14 Aramco attack, the Saudi government was able to give an exact estimate of the physical destruction of the facilities and the cut in production. Saudi Energy Minister Prince Abdulaziz also gave the market an idea of how long it would take the Kingdom to restore its production. This helped give the market a better understanding of the scale of the incident and its durability, reducing the “uncertainty risk factor” on prices. Hence market reaction toward the Aramco attack remained skeptically positive, which helped the prices to adjust and balance within few days after the attack. Market worries and the placed-in risk factor due to uncertainties over a possible immediate retaliation against Iran and escalation of the conflicts in the region was also reduced.

The Qasem Soleimani incident is of a different nature. The ambiguity and uncertainty factor with regard to Iran’s retaliation and different potential scenarios of conflict in the region that could disrupt the oil production and supply flow both in the short-term and long-term increases the weight and durability of “Qasem Soleimani risk premium” on the oil prices and market.

Despite the fact that Iranian officials viewed the Soleimani assassination as an act of war, we should not expect a direct conflict between the United States and Iran, but rather retaliation through third parties and Iran’s proxies and non-state allies in the region. Iran likes to surprise its adversaries and has a habit of attacking from unexpected angles, making it not easy to clearly expect what Tehran will do. Soleimani himself many times mentioned that: “we are closer to the United States than it thinks and we can surprise the United States from an area that it [has] never expected.”

While we could anticipate Iraq as the center of a potential conflict, Iran’s acts of retaliation could have a broader radius and could expand further inside and outside of the region. This could include new tanker attacks, destruction of oil facilities, attacks against US interests and military bases in the region, and cyber or physical attacks against the electricity grids of Iran’s neighboring countries—which are highly dependent on electricity to not only survive the hot temperatures but also for food and water security.

Iraq could be the center of conflict

This incident will provoke non-state Iraqi organizations that were part of the insurgency prior to 2011 and could mobilize them in terms of putting pressures on the Iraqi government to formally call for US troops to leave Iraq.  This could also lead to retaliatory reactions in Iraq that could lead to a massive destruction and instability.

This also poses a significant threat against the safety of Americans (from businessmen to travelers) in Iraq. The US embassy in Iraq has ordered its citizens to leave Iraq immediately as “Iraq will not be safe for American for an extended period from now.”

But in terms of new uncertainties over the security of energy supply flow from the Middle East and the global energy security calculus in general, as the tensions rise and risks from this region increase, most energy consumers, including China, will put prefer to have access to secure US energy sources versus insecure and vulnerable supplies in the Middle East.

Dr. Sara Vakhshouri is the founder and president of SVB Energy International.

Image: Iranian demonstrators chant slogans during a protest against the assassination of the Iranian Major-General Qassem Soleimani, head of the elite Quds Force, and Iraqi militia commander Abu Mahdi al-Muhandis, who were killed in an air strike at Baghdad airport, in front of United Nation office in Tehran, Iran January 3, 2020. WANA (West Asia News Agency)/Nazanin Tabatabaee via REUTERS