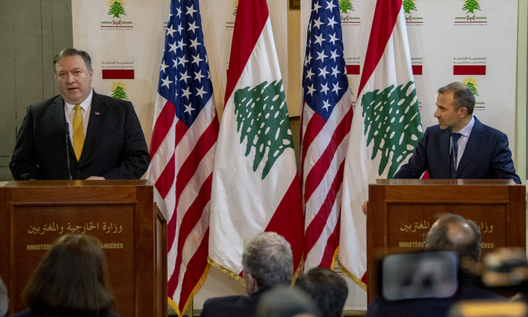 Designating Iran’s Islamic Revolutionary Guard Corps (IRGC) as a foreign terrorist organization (FTO) stirred panic in Lebanon. Hezbollah’s allies in the Lebanese government—such as the Free Patriotic Movement (FPM) and Amal—worried they too would soon bear the brunt of American sanctions. But US officials reassured a hastily dispatched delegation of the group’s allies last week that despite the more aggressive stance on Iran, they would suffer no consequences for empowering its primary proxy. In doing so, the United States lost an opportunity to weaken Hezbollah through deterring its allies.Because Hezbollah has enmeshed itself in almost every level of Lebanese government and society, countering its growing strength without harming the integrity of the Lebanese state remains a challenge. Differing but insufficient solutions to this dilemma exist. Israel, for example, prefers collectively punishing Hezbollah and the Lebanese state without distinction, while France opts for virtual inertia against the group to preserve Lebanon’s fragile stability. In the end, either option would only strengthen Hezbollah.

By contrast, the United States has adopted the theoretically preferable approach of robustly sanctioning Hezbollah while simultaneously strengthening Lebanon. This too, however, has borne little practical fruit because it has focused almost exclusively on the group’s finances, without targeting its vulnerabilities.

Hezbollah’s governmental power should be easiest to erode. Unlike its social influence or military power, it’s not a reflection of its own efforts, or numbers in parliament or the cabinet. Hezbollah holds only twelve out of 128 parliamentary seats, and three of 30 cabinet ministries. Instead, its alliances with larger parties—namely FPM and Amal—allow the group to punch above its weight in Beirut.

Despite the longevity of Hezbollah’s alliances with these groups, their partnership is fragile. Amal might also be Shia, but it is a secular party loyal to Lebanon. Though Amal and Hezbollah now form the Lebanese political arena’s “Shia duo,” they fought a mini inter-sectarian war in the late 1980s, and their enmity periodically resurfaces in clashes between their respective supporters. Parliament Speaker Nabih Berri, Amal’s leader, maintains a pragmatic alliance with Hezbollah because challenging the group head-on risks costing him the support of Shias and his political power.

Hezbollah’s alliance with FPM is even more tenuous, lacking the sectarian “glue” that uncomfortably binds it with Amal. FPM is also Lebanese nationalist, but with a Christian—predominantly Maronite—base, espousing a version of the same “Political Maronitism” ideology condemned by Hezbollah in its 1985 Open Letter.

FPM’s founder, Michel Aoun, once ranked among the Shia group’s staunchest political opponents. He only allied with it in 2006 because he correctly calculated that it would serve as the vehicle of his ascendancy to the presidency. Foreign Minister Gebran Bassil—Aoun’s son-in-law and FPM’s current leader who also has presidential aspirations—is betting on Hezbollah for the same reason.

In short, these parties are bound to Hezbollah not by conviction or shared ideology, but by self-interest. Hezbollah possesses advantages—like a committed foreign backer, a robust military arsenal, and the social support of an ever-expanding number of Shias, by all estimates Lebanon’s fastest-growing sect—that its opponents lack. This comparative advantage allows Hezbollah to reward its allies with tangible political gains, like securing Aoun’s decades-long ambition of becoming president. With no price to pay as a counterweight, FPM and Amal have little reason to abandon this otherwise beneficial alliance.

The IRGC designation could have changed that calculus, potentially signaling Washington’s readiness to hold Lebanese entities and individuals criminally liable for providing material support to the IRGC and Hezbollah, and to even style additional Lebanese political parties themselves as FTOs in the future to counter Tehran’s hegemonic ambitions. In short, the designation created fear that US patience with Hezbollah’s political enablers was at an end.

The designation’s timing increased this initial impression. It followed shortly after US Secretary of State Mike Pompeo’s recent tense stopover in Lebanon, during which Hezbollah’s main allies—Aoun, Bassil, and Berri—defended the group, its “resistance,” and place in Lebanon’s political and social pantheon. Pompeo left them with a warning: Lebanon could choose to confront Hezbollah, or face “unprecedented” American pressure on Tehran, its proxy, and their allies.

Heightening the designation’s impact, it also overlapped with reports that Washington was already mulling separate sanctions against Lebanese officials—including Berri and his inner circle—for facilitating Hezbollah’s power. Lebanese media claimed Aoun could be next, and that the United States warned Bassil to distance himself from the Shia group. Pompeo also declined to dispel these reports, stressing he’d “made very clear” to Lebanese officials that Washington would “evaluate sanctions for all those that were connected” to Hezbollah.

Berri appeared unperturbed, even sanguinely defending Hezbollah’s “resistance” at the 140th Inter-Parliamentary Union Assembly in Doha. But he and Aoun quickly dispatched their three-man delegation to the United States—which included Berri’s personal spokesman and FPM’s Ibrahim Kanaan—to lobby against sanctions.

Washington didn’t actually have to sanction FPM or Amal. It merely needed to maintain the impression that it intended to do so, to achieve its desired effect of distancing those two parties from Hezbollah. But by promptly reassuring them, however, the United States negated its ability to leverage the fear aroused by the IRGC designation to distance them from Hezbollah.

Curtailing Iran’s regional expansionism will fail without weakening Hezbollah. Designating the IRGC as an FTO—and the fear of what comes next from the label—would have provided Washington with a deterrent effect as it relates to FPM and Amal. Instead, the United States assuaged their fears and ensured that such future measures will be received with Lebanese indifference. Hezbollah’s allies will continue reaping the benefits of the partnership, as the group and Tehran continue to grow their power in Lebanon and the region unchecked.