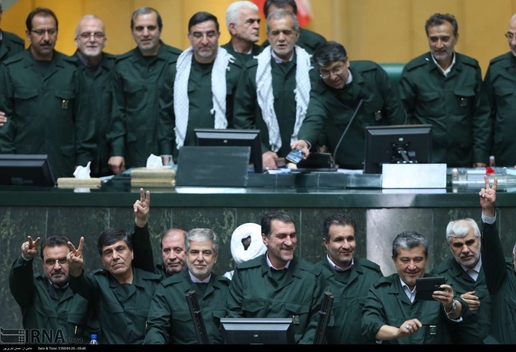 The administration of President Donald Trump finally on April 8—countering the advice of the United States’ own military and intelligence mandarins—named Iran’s Islamic Revolutionary Guard Corps (IRGC) a terrorist organization.

As the White House bragged in its statement, it was the first time that an entire branch of another government was named a foreign terrorist organization. Iran’s Supreme National Security Council (SNSC), chaired by President Hassan Rouhani, quickly countered by naming US Central Command (CENTCOM), which oversees American forces in the greater Middle East, a terrorist organization.

Beyond the obvious risk of escalating military tensions between Iranian and US forces throughout the region, and increasing the chances of an unplanned direct military conflict, the Trump administration’s designation only confuses and complicates a Middle East already mired in proxy wars, treachery, and widespread misery.

From the Trump administration’s point of view, it might seem like a win-win, part of the “maximum pressure” campaign touted by the White House and its Iran hawks. Naming the IRGC a terrorist organization looks tough. It’s an idea that’s been batted around since at least the time of the George W. Bush administration, but always rejected by the military brass.

The designation gives the impression of “doing something” without deploying troops or battleship groups. The usual suspects were overjoyed.

“Today’s unprecedented move to designate the IRGC as a Foreign Terrorist Organization demonstrates our commitment to maximize pressure on the Iranian regime until it ceases using terrorism as tool of statecraft.” National Security Adviser John Bolton, a longtime advocate of regime change, declared on Twitter. “The corrupt IRGC invests in terrorism, while Iran’s people suffer.”

The IRGC is an integral part of that corruption and brutality. But it’s also an integral part of both the mundane and extraordinary aspects of Iran’s domestic and foreign policy. Naming it a terrorist organization will yield few, if any, advantages for the US, but very likely further alienate Washington from allies and potential ones who consider the Trump administration toxic.

In 1979, Ayatollah Ruhollah Khomeini ordered the formation of the IRGC as an ideologically-motivated bulwark against the deposed Shah Mohammad Reza Pahlavi’s army, which he mistrusted, and to protect Iran from what it deemed to be inside and outside threats. Over the decades it has increased its role in cracking down on dissent, even pushing aside the Ministry of Intelligence from its role, dominating aspects of the economy, and taking part in foreign military adventures.

But over the years the IRGC has become as integral to Iranian society as the regular army. The 125,000-man “Sepah,” as Iranians call it, is where many ordinary Iranians do their military service. It sometimes acts as a kind of US Army Corps of Engineers, playing a key role in helping mitigating the damage disasters, like the floods now afflicting several provinces. There are IRGC veterans who run internet startups and even work as political scientists critical of the regime.

Akbar Ganji, an outspoken dissident against the regime who spent years in prison for writing about a series of murders of opposition figures, served in the IRGC during the Iran-Iraq War. Mohsen Sazegara, now a prominent dissident speaking out against the regime from Washington and a former fellow at a think tank, was among the founders of the IRGC.

Hundreds of thousands of law-abiding Iranians who have served in the IRGC in various capacities now will be smeared as “terrorists,” regardless of their political views, or, more relevantly, their actions.

The IRGC has also long dominated policy in Iran’s near abroad—everywhere from Afghanistan, Syria, Iraq, and Lebanon—also in places like Azerbaijan and Armenia. Even the diplomats serving in these countries are often former IRGC stalwarts.

Speak to American allies in Iraqi Kurdistan or Baghdad, and they’ll tell you how they must do business with the IRGC, which regulates commercial border traffic, coordinates security cooperation, and serves as the primary interlocutor for authorities in Tehran.

Labeling the IRGC as a terrorist organization will likely only push potential American allies into an uncomfortable situation where they may be forced to betray the United States.

After all, Iran is what it is and cannot be divorced from the region. Meanwhile, the US has proven itself at best a fickle friend that has repeatedly abandoned allies. The Trump administration has repeatedly threatened to toss Syrian, Iraqi, and Afghan allies aside.

Why would the People’s Protection Units (YPG) fighters in northern Syria or Afghanistan’s Ministry of Defense stop talking to the IRGC, which has been around for 40 years and may be around for another forty, to appease a White House that might change hands in less than two years?

More than anything, the terrorism designation just risks making such designations more meaningless than they already are, in a region where the term is bandied about too readily.

Russia, Syria, and Iran regularly smear rebels fighting the regime of Bashar al-Assad as “terrorists.” Saudi Arabia, the United Arab Emirates, and Bahrain call everyone from Muslim Brotherhood activists, to Houthi rebels, to Shia clergy, and even secular dissidents “terrorists.”

After a while the word loses its meaning. It becomes a smear by policymakers who lack the imagination, political flexibility or even the real desire to make changes to improve the lives of people in their own countries or elsewhere, and instead spend their time settling domestic scores with predecessors and critics.

The United States rolled out its designation of the entire IRGC as a terrorist organization with great fanfare. Both US Secretary of State Mike Pompeo and Special Representative for Iran Brian Hook spoke at length to the press.

Hook and Ambassador Nathan Sales, who oversees counter-terrorism, refused repeatedly to answer any questions of what a policy that a puts a branch of another government on the same list as Islamic State of Iraq and al-Sham (ISIS) might mean when it goes into effect.

“The law provides that it is a federal criminal offense punishable by up to 20 years in prison for any person who provides material support to a designated foreign terrorist organization,” said Sales. “Now, the application of that law to particular cases, it’s impossible to predict in advance what that’s going to look like.”

But such details are essential to know. Would a one-time IRGC conscript—now working as an engineer—transiting through New York to visit relatives in Toronto be plucked out of JFK and put in prison? Would a German optician who once sold lenses to a retired IRGC officer now be regarded as doing business with terrorists? Is a man who pays rent to a former IRGC commander turned real estate developer funding terrorism?

To justify the designation, Pompeo cited Iran’s alleged involvement in the 1996 Khobar attack in Saudi Arabia, foiled plots in the US, Turkey, Kenya, Germany, as well as Tehran’s support for Palestinian militant groups, Lebanese Hezbollah, and the Syrian regime.

Iran countered by describing US involvement in the 1988 downing of a passenger jet, the killing of Yemeni civilians by the Saudi-led coalition, and other “terrorist policies” in west Asia. It could have also mentioned the assassination of Iranian nuclear scientists, likely at the hands of US allies.

Certainly both countries engage in dangerous clandestine and overt military and paramilitary operations abroad. Both support militant groups, proxies, and states they see as representing their interests.

Geopolitical name-calling may feel good. But it does little to resolve the considerable differences between the two countries, and only makes the decades of grievances between Iran and the United States more difficult to unravel.