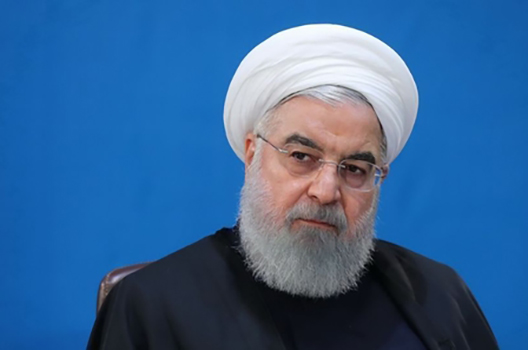 According to the latest official reports, overall prices have increased by 48 percent compared to this time a year ago and food items have become 72 percent more expensive. A recently announced survey, conducted by the Iranian Student Polling Agency, found that Iranians’ degree of satisfaction in their lives is 3.6—on a scale in which zero equals total dissatisfaction and ten total happiness—down from 6.3 in 2018.

Against this gloomy backdrop, Rouhani has tried to excuse his government’s poor performance by telling Iranians, “When you question the administration for the shortcomings, you should consider how much the administration has had authority.” He then asked for additional special powers to deal with the current crisis and said that the country needs “centralization of power and decision making.” Delicately but implicitly, he was underlining the dilemma caused by the fact that Iran has a bifurcated political system in which ultimate power is held by the Supreme Leader Ayatollah Ali Khamenei, but the elected government is held accountable for the results of the leader’s decisions.

Iran’s reformist movement has chafed at this duality for decades but complaints are getting louder as the economy falters and tensions rise in the Persian Gulf.

In May, Saeed Hajjarian, the renowned reformist strategist, argued in an article entitled ‘Which Reformism? Which Survival?’ that the “dual ruling system” does not work. He was referring to the constant tension between the administration and the deep state, led by Khamenei, that has paralyzed the country. Hajjarian suggested that the solution is to form a “uniform ruling system.” To make this possible, he argued that Rouhani should resign, and that simultaneous presidential and parliamentary elections should be held in February 2020. Hajjarian implicitly suggested that that no reformist/moderate should participate so that conservatives could win both contests.

Alireza Alavi Tabar, another prominent reform activist and analyst, maintainedthat the Kargozaran-Sazandegi (Executives of Construction) party founded by the late President Akbar Hashemi Rafsanjani “pushes the issue of Rouhani’s resignation behind the scenes.” Alavi Tabar added that the group, which sits on the right of the current governing coalition, believes that “the current situation where power is in the hands of one person [Khamenei] but another person [Rouhani] is held accountable is not sustainable. Power and responsibility should be in one pair of hands. Under the current circumstances the administration is completely paralyzed.” This faction, however, does not want to completely abandon the current system of governance and power.

Alavi Tabar also emphasizes that the more radical reform faction supported by, among others, Ahmad Zaidabadi, one of the notable figures of the reform movement, also believes that the current dual system of power is not sustainable. This group advocates leaving the political system altogether until conditions permit the reformists’ return.

Interestingly it is the hardliners—Rouhani’s ostensible opponents—who oppose his resignation. Their calculus goes like this: Let the economic situation worsen until the 2021 presidential elections in hopes that the moderates/reformists crumble under abysmal economic conditions and completely lose their chance of winning. Ayatollah Khamenei also would be happy with this outcome. In the last 30 years, since he assumed Iran’s leadership, no formidable candidate has run on a pure, hardline conservative platform, not even former President Mahmoud Ahmadinejad who was more of a populist.

The daily Kayhan, the mouthpiece of the hardliners’ camp, nervously reacted: “What resignation?… How can you in the middle of the match put the whole team completely aside and replace it with a new team?” On another occasion it wrote that the reformists, by bringing up the issue of Rouhani’s resignation, are using “this populist tactic to escape answering people about their failures to improve the economy. They claim that [our opponents create obstacles and] do not let us work. If they believe that the administration and parliament do not have enough authorization to get the job done, they should not participate in the elections and make promises.”

Ahmad Bakhshayesh Ardestani, a university professor close to the hardline conservatives, said, “Mr. Hajjarian [the notable reformist figure] talks about his wishes. Resignation [of Rouhani] cannot happen. Rouhani should stay in his position until 2021… Rouhani’s government has become a liability for the reformists. Hajjarian, by suggesting that Rouhani should resign, seeks to get rid of this liability.” Ardestani added that in 2021, it would be the conservatives’ “turn to shape the administration.”

Although many observers inside Iran, reformists and the conservatives alike, maintain that the reformists and moderates have no chance of winning the 2021 presidential elections, primarily due to worsening economic conditions, it is unlikely that Rouhani will resign.

Rouhani has never been a reformist. He represented Khamenei in the Supreme National Security Council (SNSC) for 23 years, from its inception until his first term election as president in 2013. He was Secretary of SNSC for 16 years, a position for which Khamenei has never endorsed a reformist. And, in the most glaring example, Rouhani abstained from supporting the massive 2009 upheavals led by the reformists that followed the fraud-marred re-election of Ahmadinejad. That enabled him to run to replace Ahmadinejad without being disqualified by the Khamenei-run Guardian Council.

On June 22, a moderate-leaning website close to Rouhani reported that Iran’s president had had a loud argument with his reformist vice-president, Eshaq Jahangiri. Reportedly, Rouhani said to Jahangiri, “You and the reformists are seeking to bring this administration down.” The report was not denied by the government.

Meanwhile, Rouhani, despite having a tense relationship with the radical faction of the conservatives, has a good relationship with the more moderate conservative faction led by the influential Speaker of the Parliament, Ali Larijani, who replaced Rouhani as secretary of the SNSC in 2005 until he stepped down over disagreements with Ahmadinejad. Although a Rouhani resignation under the immense pressure caused by economic woes and the hardliners’ constant attacks on him remains a possibility, it is unlikely. Rouhani, relative to the system and unlike the reformists, is still considered an insider rather than an outsider in the Islamic Republic’s complex politics and intends to stay that way.