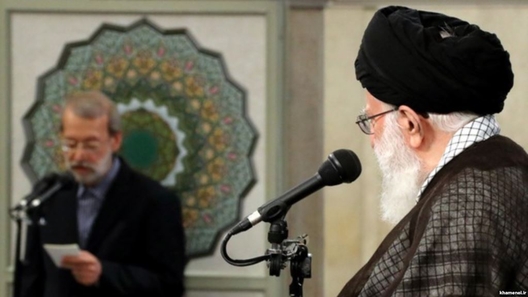 President Donald Trump’s policy towards Iran is imposing “maximum pressure” purportedly aimed at bringing Iranians back to the negotiating table. Trump demands renegotiating the Iran nuclear deal which, according to him, has “terrible flaws.” He also wants restrictions on Iran’s ballistic missile program and a change in the Iran’s aggressive policies in the region. Trump has said that he would start talks without pre-conditions.

Iranian leaders have rejected the offer. The demands, many observers maintain, are non-starters. Meanwhile, they argue, by abandoning the multilateral nuclear agreement between Iran and six major powers, Trump and his administration have lost their trustworthiness. Talks, therefore, would be pointless.

However, it should not be forgotten that during the forty-year life of the Islamic Republic we have witnessed unexpected, 180-degree twists and spectacular turns in Iranian foreign policy. Such a reverse, which we will come to, was announced on September 10.

Acceptance of United Nations Security Council resolution 598 by Ayatollah Ruhollah Khomeini, the founder of the Islamic Republic of Iran, is a key example of Iranian flexibility and pragmatism. Khomeini metaphorically referred to the move that brought an end to the 1980-1988 Iran-Iraq War, as “drinking a chalice of poison.” Previously, he had insisted that the war would continue until the Iraqi ruler, Saddam Hussein, was overthrown.

Another example is of Khomeini’s successor, Ayatollah Ali Khamenei, adopting a “heroic flexibility” approach in 2013 towards the United States. This stunned many inside and outside of Iran. After years during which acknowledged direct talks with Americans were prohibited, the new approach opened doors to dialogue at the highest levels and eventually led to the 2015 Joint Comprehensive Plan of Action (JCPOA).

Notably, the JCPOA crossed the red lines drawn by Khamenei almost in its entirety by trading significant limitations on Iran’s nuclear program for only partial sanctions relief. However, Iran accepted and signed it.

The starkest example is Iran’s decision to remain in the JCPOA so far despite Trump’s violation in withdrawing from the deal. This has happened despite Iranian senior officials—from the leader down—threatening repeatedly that Iran would abandon the agreement if the US withdrew and re-imposed economic sanctions that had been lifted under the accord.

The philosophy behind all these actions and inactions is clear: The survival of the nezam (establishment) is the number one priority. So at critical junctures, the leadership reverses course if necessary to avoid the system’s collapse. The approach has ideological roots, at least for Khamenei and the deep state, dominated by conservatives, which follow Khomeini’s declarations as religious laws. “This is a divine responsibility for everybody which is above all our duties to God: Keeping the Islamic Republic [of Iran] in place …” Khomeini had remarked.

Economists in Iran almost unanimously assert that the country is moving toward an economic crisis that can jeopardize political and social stability. The steep devaluation of Iran’s national currency, the rial, has emerged as the largest challenge. Ali Motahari, a deputy speaker of the Iranian parliament, explains the root cause of the situation: “We cannot transfer the dollar into the country. We cannot transfer foreign currencies into the country. America is blocking it.”

In other words, the Iranian banking system cannot bring in enough US dollars and other foreign currencies to meet the extremely high demand. The middle and the upper middle class are hoarding dollars and gold as a safeguard against a collapsing rial as a result of sanctions. A massive volume of money in the hands of the wealthy and uber wealthy, as a result of astronomical money supply in previous years, is flooding into the Forex market primarily demanding US dollars. Masoud Nili, the economic advisor to President Hassan Rouhani, says that on average the money volume increased by 27 percent each year, or 260 percent over four years.

As a November 4 deadline for renewed US sanctions on Iran’s oil and banking sector nears, oil revenue will continue to decrease while transferring foreign currency into Iran will become even harder. This will likely intensify the rush to convert rial savings into dollars or gold, thus pushing the currency into a further spiral. The rial has already lost 75 percent of its value compared to a year ago. Iran’s oil exports fell by 600,000 barrels per day in August compared to July. This represents one fourth of July exports. And this happened ahead of the November deadline.

Another development that could seriously affect Iran’s economy is the country being blacklisted by the inter-governmental, Paris-based Financial Action Task Force (FATF) that monitors money laundering worldwide. Iran, which has been on a gray list for several years in which sanctions have been suspended, has until October to complete reforms required by FATF or face counter-measures. “Counter-measures range from specific elements of enhanced due diligence and systematic reporting of transactions involving the jurisdiction, to a limitation or prohibition of financial transactions with the jurisdiction” according to FATF. Blacklisting Iran could lead to a near total isolation of the country from the international banking system, further stressing the economy and speeding the fall of the rial.

To meet the nine FATF requirements, the Rouhani administration has proposed four bills for approval by parliament. On June 20, Khamenei harshly attacked the bill that would make possible joining the UN Convention against Transnational Organized Crime (the Palermo Convention), saying, “These conventions are cooked up in the think tanks of the great powers securing their interests and for the sake of their benefits.” He added that parliament is “mature and wise” and lawmakers “must independently make legislation on issues such as terrorism or combating money laundering.”

Many thought that his position had put an end to the idea of joining the convention, let alone addressing other FATF required measures. However, in another unexpected, U-turn on September 10, the chairman of parliament’s National Security and Foreign Policy Commission, Heshmatollah Falahat-Pisheh, announced that Khamenei had authorized the “administration and the parliament” to decide about dealing with FATF. Since parliament is controlled by moderate conservatives and reformists, Khamenei’s move means that hardliners are marginalized on an issue that has been a policy battlefield. This reversal was unimaginable just a month ago.

This development shows again that, despite all the rhetoric, when the survival of the system is in jeopardy, dramatic policy changes at the highest levels of power in Iran can occur. The currency crisis, Iranian economists’ predictions about the likely explosion of inflation and unemployment, the dramatic reduction of the country’s oil exports caused by US sanctions, and simmering discontent over corruption and other issues, combine to opening the door to speculation that direct or indirect talks with the Trump administration are not the impossibility that has been assumed.