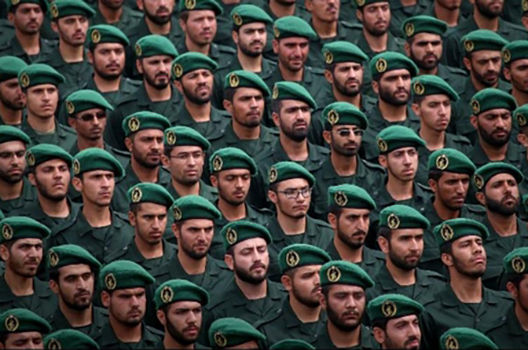 The Trump administration’s unilateral withdrawal from the Joint Comprehensive Plan of Action (JCPOA) and full re-imposition of sanctions against Iran have fueled the nationalist and anti-imperialist ideology that has become central to the mission of the Islamic Revolutionary Guards Corps (IRGC).

At least since fraud-marred 2009 presidential election protests in Iran, the IRGC has been aware that religious ideology can no longer rally nation-wide support among young Iranians. An IRGC captain and media producer admitted: “The youngest generation in our country doesn’t understand our religious language anymore.” The Revolutionary Guards responded by focusing its propaganda efforts on nationalism, as socio-cultural anthropologist Narges Bajoghli has argued.

A prime example of the IRGC’s revamped rhetoric is a regime-backed video by Amir Tataloo, an Iranian rapper. Tataloo, a heavily tattooed singer who campaigned in 2017 for unsuccessful hardline presidential candidate Ebrahim Raisi, raps about nationalism and militarism, as he alludes to the necessity of having a strong Iranian regime to protect the country. Lyrics include:

“This is our absolute right to have an armed Persian Gulf… If there were no lightning they would destroy the sky… There needs to be a protection for a bad day.”

President Trump’s ‘maximum pressure’ campaign seems aimed at bringing about this bad day. In 2018, the Trump administration backed out of the JCPOA and ordered the toughest sanctions the US had ever imposed on Iran despite Iranian compliance with the nuclear agreement. Since the re-imposition of US sanctions in 2018, Iranian inflation has rocketed, reaching 52 percent in April. It has become easy for Iranian hardliners to label the United States an untrustworthy, imperialist aggressor. In turn, the IRGC can present itself as a force that will protect Iranians and defy the US superpower.

Iran’s foreign minister Mohammad Javad Zarif recently emphasized that US pressure is not new to the country. On July 3, Zarif tweeted that “US aggression against Iran did not begin with @realdonaldtrump,” referring to the US downing of an Iranian passenger jet which killed all 290 people on board. The incident, which the US said was an accident, occurred in 1988, when the US backed Baghdad in the Iran-Iraq War. Zarif attached an image of an Iranian postage stamp commemorating the event.

While US military action against Iran may not be new, Iranian responses to the large US military presence in the Persian Gulf are becoming bolder, as illustrated by the IRGC’s shooting down of a $130 million American drone in June. This demonstration of military strength visualized the sort of muscle protection rapper Tataloo’s video demanded. The IRGC publicized the event by releasing a video showing an American flag and a drone takeoff with dramatic background music. These images were followed by actual footage of the US drone’s explosion. The video also featured a map of the Strait of Hormuz, over which the drone was shot down, in an illustration.

The IRGC’s nationalist ideology is connected to its historic focus on anti-imperialism. An important aim of the IRGC since its formation after the Islamic Revolution in 1979, has been to fight imperialism. One landmark of imperialist influence, against which revolutionaries rallied, was the 1953 coup d’état against Iranian Prime Minister Mohammad Mossadegh that was organized by Britain’s MI6 and the CIA. Mossadegh led an anti-imperialist coalition that nationalized Iran’s oil industry.

Extracting oil from Iran was an important mechanism of British imperialism in the 19th and 20th centuries, which is why Britain was so opposed to the nationalization of Iranian oil in the 1950s. More recently, the IRGC seized a British oil tanker in retaliation for the British seizure of an Iranian tanker alleged to be carrying oil to Syria off the coast of Gibraltar on July 4. The IRGC planted an Iranian flag on the British tanker, demonstrating Iran’s military strength while defying a former colonial power whose history in the region Iranians have not forgotten.

The IRGC dramatized this action with another video, which shows the view from a helicopter from which IRGC personnel winch down onto the tanker. It also shows the large oil tanker and the comparatively minuscule IRGC speedboats surrounding it. Both in the case of the US drone shoot-down and the British tanker seizure, the Revolutionary Guard’s message is clear: Iran might well be at a military disadvantage, but it does not shy away from taking on old as well as new empires.

By demonstrating military strength, the IRGC seeks to downplay the country’s conventional weapons’ weakness in comparison to global powers such as the US and its regional partner, Saudi Arabia. The IRGC maximizes its limited resources through asymmetric tactics, such as using speedboats to swarm larger crafts or laying naval mines.

By flexing its muscles, the Revolutionary Guards are proving to the international community that it has bite as well as bark and that the US decision to try to stop Iran from exporting oil will have dangerous consequences. The Trump administration’s maximum pressure campaign has forced Iran into a corner, simultaneously strengthening and giving meaning to the IRGC’s nationalism. As long as the United States continues with this strategy, it feeds into the IRGC’s narrative.

Pia Hecher is a non-proliferation and nuclear policy intern at the International Institute for Strategic Studies (IISS) and a junior fellow at the European Stability Initiative (ESI). She is completing a master’s degree at the University of Chicago in Middle Eastern Studies as a Fulbright Scholar and received her BA from Cambridge University.