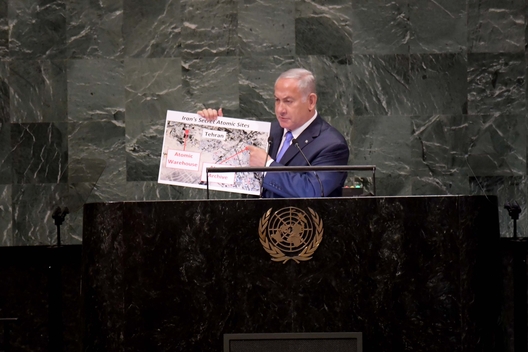 “I really, really think someone set him up,” Iran’s deputy foreign minister said in an initial reaction to Israeli Prime Minister Benjamin Netanyahu’s speech at the United Nations General Assembly on September 27.

In an interview with state media, Abbas Araghchi and Iranian Foreign Minister Mohammad Javad Zarif, who is seated next to Araghchi, are both unable to control their laughter at Netanyahu’s latest accusation that Iran is housing a secret warehouse for a nuclear weapons program that Iran, according to the CIA and the International Atomic Energy Agency (IAEA), ended more than a decade ago.

Meeting with a small group of reporters and analysts on September 29, Zarif added the site was a Persian carpet-washing factory. “Israeli intelligence was taken for a ride,” Zarif said, implying that Iran’s own intelligence services had made fools out of the vaunted Mossad.

Holding an aerial map of Tehran with red arrows, Netanyahu told members of the UN General Assembly in New York: “Today, I am disclosing for the first time that Iran has another secret facility in Tehran—a secret atomic warehouse for storing massive amounts of equipment and material from Iran’s secret nuclear weapons program.” The warehouse is reportedly three miles from the one that Mossad agents broke into earlier this year from which they stole 50,000 documents and 163 compact discs with old information on Iran’s nuclear program.

The Israeli prime minister claimed that the Torquzabad warehouse had been cleaned out by Iranian officials and that they “removed 15 kilograms of radioactive material” and “spread it around Tehran in an effort to hide the evidence.” Netanyahu even suggested Iranians buy a “Geiger counter on Amazon for only $29.99” to find the material.

Rather than take these allegations seriously, many Iranians poked fun at the Israeli prime minister’s allegations, and not just Araghchi and Zarif. Iranians found the allegations humorous because Torquzabad—a town the average Iranian hasn’t heard of—rhymes with Darquzabad or “nowhere land.”

A group of young Iranian men wasted no time and visited this so-called nowhere land right after Netanyahu’s speech. “Don’t bother coming here—there’s nothing here,” they laugh in a video popularly shared on social media. Since the video, Iranians are now using the Persian carpet cleaning facility site as an opportunity to post selfies. At least two were featured on the frontpage of Iranian newspapers. Even the Chief of Staff for the Armed Forces, Major General Mohammad Bagheri, weighed-in on the speech on Twitter with the Persian hashtag #Torquzabad and a photo of himself and other high ranking officials laughing.

A Torquzabad local told Euro News: “Look at this place and you’ll notice it is nothing. Its owner doesn’t even have enough water to drink. Their water was cut off by the Water Organization for being in debt—now he is supposed to be making atomic bombs?” Still, it was hard to ignore the surveillance camera outside the facility for a town reported to have no more than 3,000 residents (There are supposedly several such cameras in the town).

On social media it was reported that an elderly local was so happy at the media attention Torquazabad was receiving that he/she hoped the price of land would go up in the area.

The Iranians weren’t the only ones having a laugh at the expense of Israel last week. The Israelis also had a laugh at Iran’s expense. A billboard in Shiraz, which commemorated the anniversary of the Iran-Iraq War, featured Israel Defense Forces (IDF) soldiers looking into the horizon with the slogan “honoring the powerful military.”

The billboard was taken down after social media users recognized that the soldiers were carrying M-16 rifles and wearing IDF uniforms. The original image reportedly had a female soldier that was cropped out. An official in Shiraz has since been arrested.

After Netanyahu’s speech, the Iranian Foreign Ministry denied the allegations. Spokesman Bahram Ghassemi said, “The world will only laugh loudly at this type of false, meaningless and unnecessary speech.” Zarif called Netanyahu’s presentation on Twitter an “arts and craft show” and called on Israel to open its secret nuclear weapons program for investigation.

Two anonymous US officials claimed that the United States was aware of the facility but said that “it’s full of file cabinets and paper, not aluminum tubes for centrifuges.” One official added that “there is nothing in it that would allow Iran to break out of the JCPOA [Joint Comprehensive Plan of Action] any faster than it otherwise could.”

A US State Department official called on the IAEA to investigate “in order to provide confidence to the international community that there are no undeclared nuclear materials or activities in Iran.” However, Zarif, in his meeting with reporters on September 29, said Iran would not allow the IAEA to inspect the site. “The IAEA will not allow itself to be the arm of the boy who cried wolf,” he told the group, which included the Atlantic Council’s Barbara Slavin.

Though Netanyahu’s speech was completely eclipsed in the US by the Brett Kavanaugh hearings on Capitol Hill, it was timed to capture the attention of the audience at home, right as the 8 o’clock evening news began. According to Israeli journalist Ben Caspit, this latest ploy was meant to send the prime minister’s supporters to the polls, as Netanyahu is expected to call for early elections again to solidify his power.