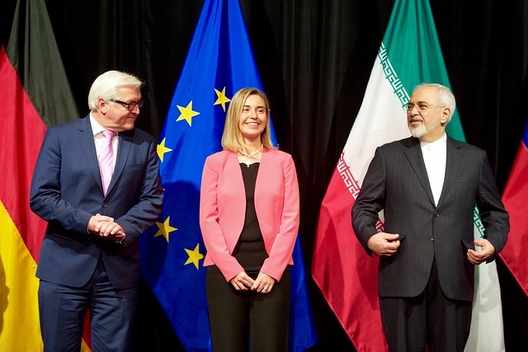 Iranian President Hassan Rouhani announced on May 8 that Iran may reduce its compliance with the Joint Comprehensive Plan of Action (JCPOA) if the non-US parties to the deal don’t find a way to provide Tehran with promised economic benefits.In response, the European Union and foreign ministers of Britain, France and Germany expressed their continued support for the JCPOA but warned Iran not to carry out its ultimatum to disregard selected limitations to its nuclear program.

Furthermore, the Europeans rejected the Iranian ultimatum of sixty days to demonstrate that sanctions relief and economic benefits would be forthcoming. At the same time, the Europeans said they regretted the re-imposition of sanctions by the United States following its withdrawal from the JCPOA and called on countries not party to the agreement to refrain from “taking any actions that impede the remaining parties’ ability to fully perform their commitments.”

In reality, however, the Europeans are stuck between their multilateral inclination and transatlantic realities.

US sanctions, re-imposed after the JCPOA exit, have prevented the other parties from fulfilling their commitments. Fear of losing access to US markets and financial structures as well as concern about direct penalties have led not only European but also Russian and Chinese companies to leave Iran. Fear is even preventing non–sanctioned goods, such as food and medicine, from reaching Iran in sufficient quantities. Poverty and unemployment are increasing rapidly and the price of medicine is skyrocketing. The Europeans are trying to enable legitimate trade with Iran through a special purpose vehicle called INSTEX. But more than three months after it was launched, the mechanism is not yet operational.

The Iranians had implemented a wait-and-see policy, trusting that the Europeans would come up with a way to continue trade. However, now that the Trump administration has decided to try to reduce Iranian oil exports to zero, waiting is no longer an option. The Iranian government´s answer is “less-for-less”: since the other parties did not deliver, Iran will also reduce its commitments. This course of action was built into the deal. Among the measures Iran is contemplating are producing and installing more advanced centrifuges, increasing nuclear research and development and building up stocks of enriched uranium.

The Europeans have a lot to lose if the JCPOA collapses. It is the crown jewel of the European Union´s foreign and security policy. The Europeans initiated and the EU later coordinated the twelve years of negotiations that resulted in the agreement. They succeeded in avoiding a military solution in Iran in 2003 after the US invaded Iraq on what turned out to be spurious claims that it had restarted a program to build weapons of mass destruction. Europeans have promoted diplomacy instead of military action as a superior tool to promote non-proliferation. Furthermore, the Europeans through the JCPOA achieved a global role in the nuclear order. Not only did the US, at least under the Barack Obama and George W. Bush administrations, seek to have the EU on its side, but the Russians and Chinese also looked toward Europe to facilitate negotiations. If the JCPOA collapses now, the EU stands to lose its global credibility as a negotiator and convener.

The EU stands for multilateralism and an international rules-based order with the United Nations at its center. The US is acting unilaterally and is in breach of UN Security Council resolution 2231 which codified the JCPOA. Despite US provocations, Iran has so far complied with its obligations under the resolution. The International Atomic Energy Agency has confirmed fourteen times since 2015 that Iran is in compliance with the JCPOA. No one in the international community was prepared for the US cheating first.

At the same time, the transatlantic link between Europe and the US has been the backbone of European foreign and security policy. Countries such as Britain, which is trying to leave the EU, are particularly dependent on good ties with the US.

For Europeans, joining the US in exiting the deal would be politically difficult but, at the same time, countering it economically is not possible given the dollar’s dominance in the world economy. The EU has not dared to enforce counter-sanctions on US firms nor on those of its allies. INSTEX is as far as the EU would go.

Due to the US re-imposition of the sanctions, the Europeans have lost their financial autonomy. The US is trying to coerce Europeans to act in concert with US policies. For example, SWIFT, the international financial messaging system based in Belgium, was forced by US pressure to end access for a number of Iranian banks. Given the Iranian announcement, the US now appears to hope it can get Europeans on its side or least create divisions among EU member states.

The EU cannot resolve the situation created by the US exit and sanctions alone. It is time to turn to the other remaining partners to see if a common front can be forged. Europeans fear that the Russians and the Chinese might use this to try to divide the transatlantic alliance but in the context of the JCPOA, the transatlantic link has already collapsed. Therefore the EU should test its global role, overcome its fears and work with Russia and China to protect the JCPOA.

Having Russia and China join INSTEX as a common trade intermediary would be a good first step. The US government is not immune to counter-pressures, particularly when they come from three superpowers. And despite a recent escalation in threatening language between them, both the US and Iran know that a “military solution” would be too costly.

Tarja Cronberg is a distinguished associate fellow at the Stockholm International Peace Research Institute and former chair of the European Parliament’s Iran delegation. Follow her on Twitter: @tarjacronberg.